Will Rising Oil Prices Cause an Economic Recession in the US? 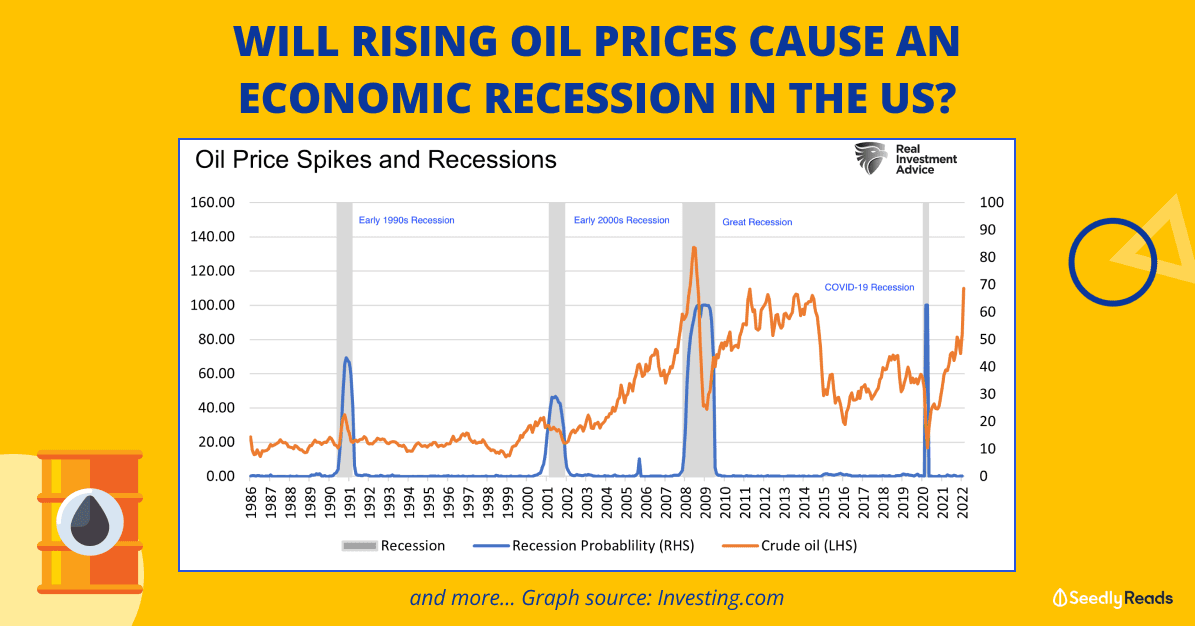 Will Rising Oil Prices Cause an Economic Recession in the US?

If you have been monitoring the news lately, you might have read about how crude oil prices have gone to the moon.

Drivers in Singapore might have also felt the pinch as pump prices in Singapore have been soaring in 2022. As of Thursday (10 March 2022), the cheapest petrol you can get (SPC 92-Octane grade petrol) will cost you $3 a litre! 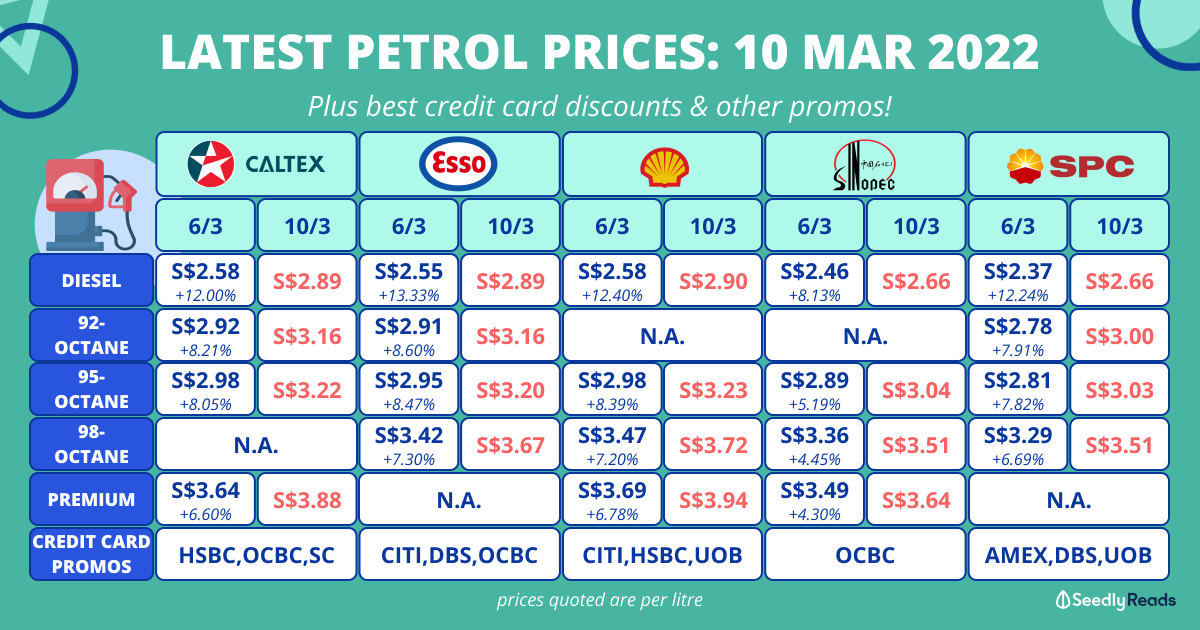 Although the price of the benchmark U.S. West Texas Intermediate (WTI) crude oil has fallen to about US$98.50 per barrel at the time of writing.

Might this spike in oil prices trigger an economic downturn?

Here’s what you need to know.

Why Monitor The US?

It is essential to look at how the U.S. economy is doing as what happens in America has feedback effects on the rest of the world.

The U.S. economy accounts for about 25 per cent of the global gross domestic product (GDP).

The infographic below shows this in greater detail:

In addition to making up a significant portion of the world’s GDP, there are other financial impacts as well. For example, when the U.S. Federal Reserve (Fed) cuts interest rates, other central banks worldwide will follow suit.

Many Singaporeans also own U.S. equities via the many online brokerages that offer access to the U.S. stock markets.

As mentioned above, the price of oil has soared as the world’s economies are recovering strongly amidst the improving COVID-19 situation.

This is the case as humans are addicted to oil. Petroleum, one of the key by-products of oil is used to generate electricity, power vehicles, planes, heating and more. In addition, petroleum is a critical ingredient for everyday products like chemicals, tape, plastics, paints, and much more. It’s not a stretch to say that oil powers most of our economic activity.

Thus, the oil demand tends to increase in tandem with economic growth. As such, there is a healthy correlation between oil prices and economic activity.

In addition, due to the ongoing Russian Ukraine invasion of Ukraine, crude oil prices spiked as high as US$139 a barrel (WTI crude) last Monday, 7 March 2022, the highest it has been in almost 14 years.

Let’s look at history via the table below. There is a correlation between drastic oil price spikes (orange), recessions in the U.S. (grey bars) and the probability of a recession (blue).

If you like, you can head over to Jeremy Piger’s website for an in-depth look at how the data was calculated.

Let’s break down the impact of soaring oil prices on the economy further.

According to a report from the San Francisco Federal Reserve:

When gasoline prices increase, a larger share of households’ budgets is likely to be spent on it, which leaves less to spend on other goods and services. The same goes for businesses whose goods must be shipped from place to place or that use fuel as a major input (such as the airline industry). Higher oil prices tend to make production more expensive for businesses, just as they make it more expensive for households to do the things they normally do.

The increased uncertainty of the oil price spike might make consumers postpone large purchases, and businesses might also put off investments until things stabilise.

These behavioural changes might accumulate and result in the economy slowing down in the near term.

Another indirect impact of oil price spikes we have to consider is what the central bank does in response.

For context, the Fed is expected to raise interest rates this week.

The Fed also has inflation on its mind as in February 2022, the U.S. consumer-price index inflation rose again to 7.9%. Also, the Bureau of Labor Statistics reported last Thursday, 10 March 2022, that prices had increased by 0.8% in the month of February alone.

This interest rate hike could contribute to slowing economic growth.

What Should Investors Do?

Investors should be prepared for additional volatility during this period, though.

We are in unchartered waters as few expected Russia would invade Ukraine in 2022.

This guide on how to invest during stock market volatility should help! 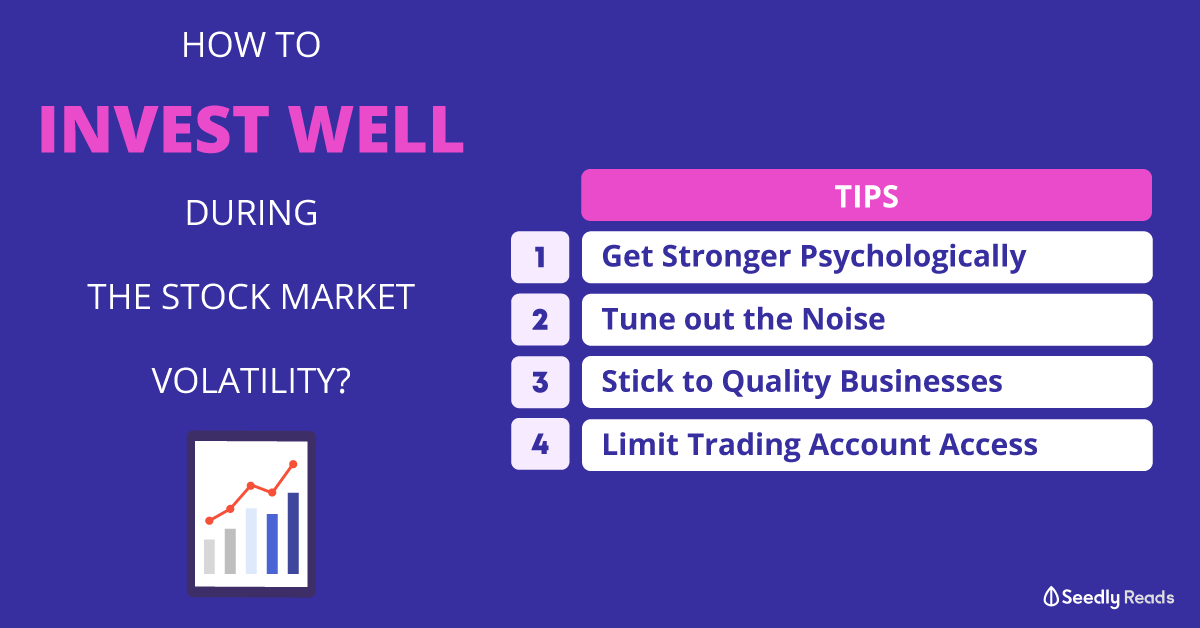