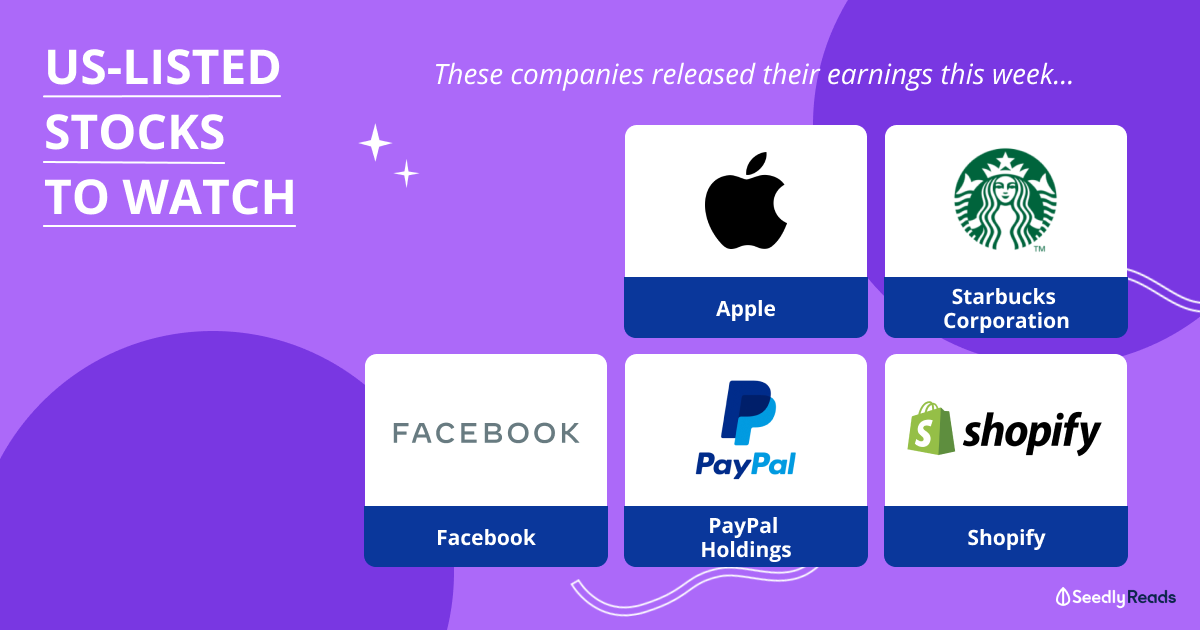 So far this week, a couple of US-listed companies released their earnings.

Let’s look at some of the key highlights from their latest announcements here.

For the latest quarter, Apple posted a revenue jump of 36% year-on-year to US$81.4 billion, setting a new June quarter record.

iPhone revenue grew around 50% to US$39.6 billion, exceeding Apple’s own expectations as the iPhone 12 family continues to be in high demand.

Apple has declared a dividend of US$0.22 per share for the quarter, up from US$0.205 per share (after accounting for the 4-for-1 stock split) a year ago.

Starbucks said that its latest third-quarter performance exceeded expectations with record revenue and earnings, showing the resilience and power of its brand.

The company posted an all-time high revenue of US$7.5 billion, up 78% year-on-year.

Starbuck’s global comparable store sales surged 73%, driven by a 75% increase in transactions, partially offset by a 1% decline in the average ticket price.

Active Starbucks Rewards membership in the US grew 48% year-on-year to 24.2 million.

The rewards program helps to grow Starbuck’s base of loyal customers and encourages more frequent visits.

Meanwhile, Starbuck’s net profit came in at US$1.2 billion, reversing from a loss seen last year.

With the strong quarterly performance, Starbucks has raised its full-year fiscal 2021 margin and earnings per share guidance.

Facebook is another company that posted strong growth in its financials.

For its 2021 second-quarter, total revenue grew 56% year-on-year to US$29.1 billion, driven by advertising revenue growth.

Advertising revenue increased due to a 47% year-over-year growth in the average price per ad and a 6% increase in the number of ads delivered.

The latest quarterly revenue surpassed the previous high seen in its 2020 fourth-quarter too.

With a stronger growth in operating income of 107%, Facebook’s operating margin rose from 32% to 43%.

Similarly, the company’s net profit doubled from US$5.2 billion to US$10.4 billion.

Users continued to be engaged with the Facebook platform.

DAU is defined as a registered and logged-in Facebook user who visited Facebook or used the Messenger application on a given day.

MAU is defined as a registered and logged-in Facebook user who visited Facebook or used the Messenger application in the last 30 days as of the date of measurement.

Looking ahead, Facebook said that in the third and fourth quarters of 2021, it expects to see year-over-year total revenue growth rates slowing significantly on a sequential basis as it laps periods of increasingly strong growth.

However, over the longer run, there’s plenty of growth avenues for Facebook.

Mark Zuckerberg, Facebook’s founder and chief executive, led in on some of the company’s initiatives for its next phase of growth.

“I’m excited to see our major initiatives around creators and community, commerce, and building the next computing platform coming together to start to bring the vision of the metaverse to life.”

“Each of these areas is important and is going to unlock a lot of value on its own. But they’re also building blocks for the future of the internet and the future vision for our company.”

Zuckerberg envisions his company to transition from a pure social media company to a metaverse company in the coming years.

A metaverse is a virtual environment where you can be present with people in digital spaces. Facebook believes that the metaverse will be the successor to mobile internet.

TPV is the value of payments, after any payment reversals, successfully completed through PayPal’s platform.

“On the heels of a record year, we continued to drive strong results in the second quarter, reflecting some of the best performance in our history. Our platform now supports 403 million active accounts, with an annualized TPV run rate of approximately $1.25 trillion. Clearly PayPal has evolved into an essential service in the emerging digital economy.”

Another company that posted strong quarterly results is Shopify, a provider of internet infrastructure for commerce.

For the first quarter of 2021, Shopify’s total revenue rose 57% year-on-year to US$1.2 billion, crossing the US$1 billion mark in quarterly sales for the first time.

GMV is the total dollar value of orders going through the Shopify platform.

With the robust business growth, Shopify’s net income ballooned to US$879.1 million, up from just US$36.0 million a year ago. This shows the company has strong operating leverage.

Shopify expects to grow revenue rapidly in 2021 still, but at a lower rate than in 2020.

This is because there’s improvement in the overall economic environment, and consumer spending is starting to rotate back to services and physical shops.

Disclaimer: The information provided by Seedly serves as an educational piece and is not intended to be personalised investment advice. ​Readers should always do their own due diligence and consider their financial goals before investing in any stock. The writer owns shares in Apple, Starbucks, and Shopify.