What Warren Buffett's Right-Hand Man Says About Bitcoin, Robinhood, and the Stock Market 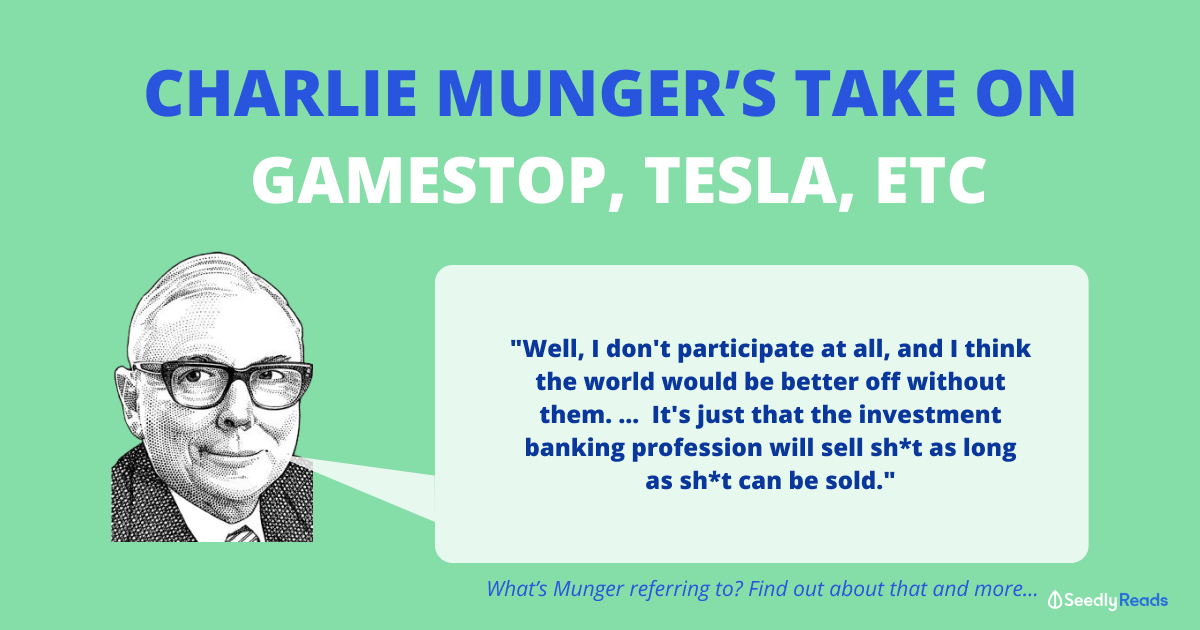 What Warren Buffett's Right-Hand Man Says About Bitcoin, Robinhood, and the Stock Market

Thanks to Munger, Buffett transitioned from buying unusually cheap stocks of companies that don’t necessarily have strong business prospects (called “cigar butts”) to buying wonderful companies that may not trade cheaply.

Munger is the chairman of the newspaper publisher that’s based in California, United States.

With that, here are some interesting quotes uttered by the wise man who’s almost a century old (italics are used to emphasise key points when quoting Munger).

On Market Behaviour and Psychology

Someone asked about the broad stock market frenzy and the psychological implications of this type of market behaviour.

The person also asked what investors can do to better cope with such market euphoria.

This is what Munger had to say:

“Well, these things do happen in the market economy. You get crazy booms. Remember, the dot-com boom? When every little building in Silicon Valley ran at a huge price, and a few months later, they were about — 1/3 of them were vacant. There are these periods in capitalism. And I’ve been around for a long time, and my policy has always been to just ride them out. And I think that’s what shareholders do. In fact, what shareholders actually do is a lot of them crowd in to buying stocks on frenzy frequently on credit because they see that they’re going up. And of course, that’s a very dangerous way to invest. I think that shareholders should be more sensible and not crowd into stocks and just buy them just because they’re going up and they like to gamble.”

Robinhood, the pioneer in zero-commission trading, is seen as the main gateway for young investors in the US to gain stock market access.

This is Munger’s take on the new type of brokerages springing up:

“Well, it’s most egregious in the momentum trading by novice investors lured in by new types of brokerage operation like Robinhood. And I think all of this activity is regrettable. I think civilization would do better without it. You’ll remember that when the first big bubble came, which was the South Sea bubble in England back in 1700s, it created such havoc eventually when it blew up that England didn’t allow hardly any public trading and securities of any companies for decades thereafter. It just created the most unholy mess. So human greed and the aggression of the brokerage community creates these bubbles from time to time, and I think wise people just stay out of them.”

He also explained why trades made through Robinhood are not “free”:

Munger weighed in on the issue as well:

“And of course, when things get extreme, you have things like that short squeeze. It’s not generally noticed by the public, but clearinghouses clear all these trades. And when things get as crazy as they were in the event you’re talking about, there are threats of clearinghouse failure. So it gets very dangerous, and it’s really stupid to have a culture which encourages as much gambling in stocks by people who have the mindset of racetrack betters. And of course, it’s going to create trouble as it did”

Not surprisingly, Robinhood took issue with what Munger had said.

A special purpose acquisition company (SPAC) is a “blank check” shell company that is designed to take a private firm public without going through the traditional listing process.

When asked for his thoughts on SPACs, Munger mentioned in his classic not-mincing-my-words way:

“Well, I don’t participate at all, and I think the world would be better off without them. I think this kind of crazy speculation in enterprises not even founder picked out yet is a sign of an irritating bubble. It’s just that the investment banking profession will sell sh*t as long as sh*t can be sold.”

That’s a lot of sh*t in one article.

There’s a general thinking that value investing is dead since growth companies like Amazon.com (NASDAQ: AMZN), Palantir (NYSE: PLTR), and Tesla (NASDAQ: TSLA) have been outperforming value stocks by a huge margin.

Psst… Did you know you can discuss investing with other like-minded folks? Yes, you can do it here in the Seedly community!

Many aspects of investing are touchy topics, including diversification.

Some investors want to have a diversified portfolio while some others prefer to concentrate their money on a few stocks.

Munger, who belongs to the latter camp, had this to say on the topic of diversification:

“What is interesting is that in wealth management, a lot of people think they have 100 stocks they’re investing more professionally than they are, they have 4 or 5. I regard this as insanity, absolute insanity. I find it much easier to find 4 or 5 investments, where I have a pretty reasonable chance of being right that they’re way above average. I think it’s much easier to find 5 than just to find 100. I think the people who argue for all this diversification — by the way, I call it diworsification and — which I copied from somebody. And I’m way more comfortable owning 2 or 3 stocks, which I think I know something about and where I think I have an advantage.”

On Bitcoin and Tesla

Another trending topic in the investing world is Bitcoin, which hit an all-time high of around US$58,000 on 22 February 2021.

At the time of writing, the cryptocurrency’s selling at US$44,682, down 11% as compared to the previous day.

This is how Munger views Bitcoin:

“So I don’t think Bitcoin is going to end up the medium of exchange for the world. It’s too volatile to serve well as a medium of exchange. And it’s really kind of an artificial substitute for gold. And since I never buy any gold, I never buy any Bitcoin. And I recommend that other people follow my practice. Bitcoin reminds me of what Oscar Wilde said about fox hunting, he said, it was the pursuit of the uneatable by the unspeakable.”

When asked which is crazier, “Bitcoin at $50,000 or Tesla’s fully diluted enterprise value of $1 trillion”, Munger succinctly replied:

“Well, I have the same difficulty that Samuel Johnson once had, when he got a similar question. And he said, “I can’t decide the order of presidency between a flea and a louse. And I feel the same way about those choices. I don’t know which is worse.”

Disclaimer: The information provided by Seedly serves as an educational piece and is not intended to be personalised investment advice. ​Readers should always do their own due diligence and consider their financial goals before investing in any stock. Image credit: Bidsketch