What We Can Learn From WeWork's Astronomical Rise And Almost-Fall 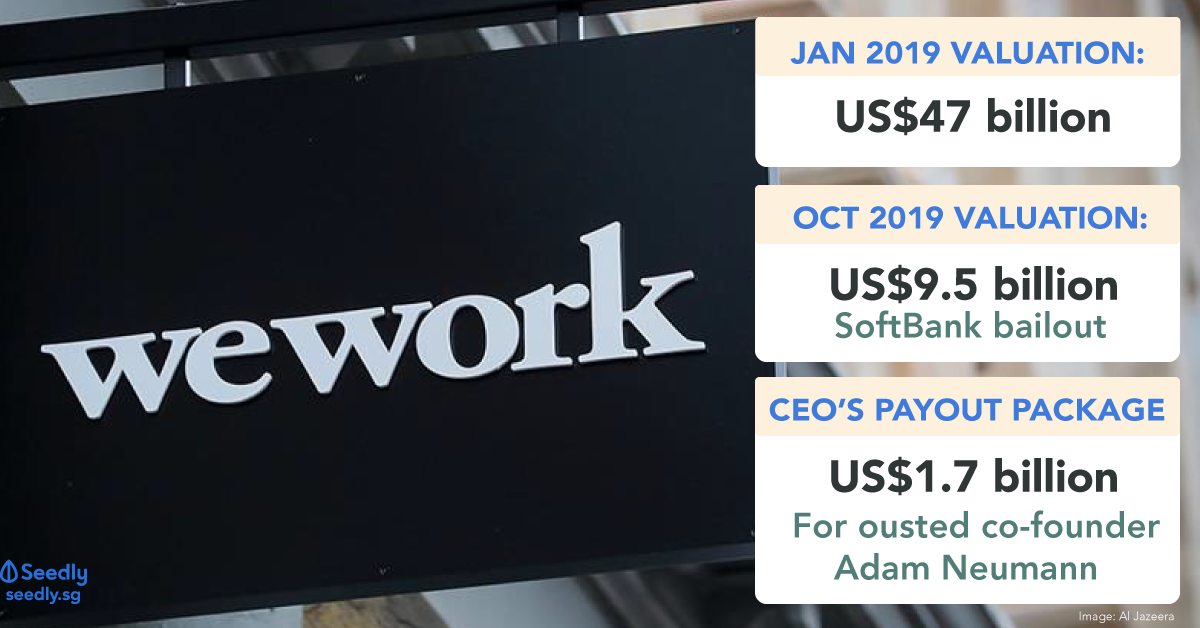 What We Can Learn From WeWork's Astronomical Rise And Almost-Fall

As far as unicorn start-up stories come and go, co-working spaces giant WeWork‘s is a spectacular one marked by aggressive growth, heavy losses – and, most recently, an exorbitant, last-ditch attempt to salvage the flailing company.

That attempt comes courtesy of major investor and Japanese telcom conglomerate SoftBank, in a bailout valued at some US$9.5 billion.

The surprise move – announced on 23 Oct, 2019 – seems a staggering sum, but not when you consider that the co-working company was valued at US$47 billion just earlier this year.

Whether you’re a start-up or enterprise company looking into growth plans, WeWork’s is a classic case study in what not to do. While only time will reveal whether the co-working company can be saved, these are some lessons we’ve gleaned from its almost-fall.

A Founder’s Outsize Power Could Ultimately Hurt The Company

When ousted co-founder Adam Neumann voluntarily stepped down as CEO in September this year, it foreshadowed his inevitable buyout from SoftBank – only WeWork’s biggest investor. His severance package, however, came at a stratospheric cost of almost US$1.7billion.

The sum includes a US$185 million consulting fee, and a US$500 million credit line for fees owed to JP Morgan Chase. (Incidentally, JP Morgan lost to SoftBank in its bailout proposal for WeWork.)

A consulting fee is unusual in itself for an ousted CEO – but the nail in the coffin, really, is the practically unfettered power Neumann held over the company.

Neumann ensured he would maintain a majority stake in WeWork by granting himself 20 votes per share, as well as the power to choose the board of directors. This was later adjusted to 10 votes per share, following public and investor backlash.

At the point of his ousting, the former CEO’s stake had been reduced to three votes per share.

Only in cases of disability or his death, then, would the multi-class stock structure be amended to a one-share, one-vote ratio.

Dual-class shares aren’t new; Google and Facebook boast the same structure, a move that’s designed to protect a company’s long-term growth. Yet it’s so far proven to have backfired, not least in WeWork’s case.

In August 2019, the co-sharing giant filed for its initial public offering and, along with it, paperwork that revealed WeWork had been made a net loss of $1.6 billion in 2018 alone. In 2016 and 2017, its losses stood at US$429 million and US$890 million respectively.

In a strange move, however, Neumann purportedly cashed out some US$700 million in loans and stock sales prior to the company’s IPO.

It’s also imperative to mention at this point that Neumann’s abuse of power included engaging in practices that may not have been in the interest of WeWork’s growth.

These included purchasing property, then leasing these spaces to WeWork for his benefit. Additionally, he paid more than US$650,000 on property taxes for various properties across the US.

The idea of granting an excess of power to CEOs, co-founders and chairmen is a worrying trend among giant tech start-ups – one that often backfires, given regular shareholders are granted virtually no say in company decisions.

In fact, the only real winner amidst the multibillion-dollar mess is Adam Neumann, whose charisma and position of privilege ensured he’d mostly escape unscathed under all circumstances. Essentially, he technically could have been voted out of power – but his majority stake in WeWork meant Neumann could overrule that by replacing the board entirely.

In the face of increasing pressure from investors, though, Neumann eventually bowed to pressure by resigning.

It’s clear now that supervoting rights and expensive buyouts could ultimately impede a company’s growth. Ensuring power isn’t contained in the hands of several (or one person) is a controversial idea, but if the WeWork debacle is any indication, a company’s corporate structure clearly matters to investors and the public.

That comes in addition to transparency, which WeWork lacked.

As one of the most closely-watched companies, revealing its financial results caused its value to plummet.

Going public tends to have that effect; share prices for ride-hailing giants Uber and Lyft fell over 20% upon their being listed earlier this year.

You’ll Need More Than An Ecosystem To Make Things Work

It’s common practice for companies to increase consumer retention: introduce a lock-in system whose rewards are ripe for reaping, or include value-added extras to complement a product you already love.

Much like Grab and its GrabPay credits – and multi-currency digital banks that encourage spending via a virtual wallet – WeWork designed a clever ecosystem that saw membership retention rates of 119% at the point of its IPO filing.

Part of what makes the WeWork ecosystem so ingenious and difficult to leave is the support it provides its pool of almost 530,000 members.

In-office perks (including beer on tap) and the ability to virtually work at any of its 836 locations around the world are points of convenience for freelancers, entrepreneurs,  start-ups and SMEs – particularly those looking for more networking opportunities and resources.

Then come the value-added extras: the namesake app, which maps businesses or entrepreneurs to other members in similar areas of expertise; the WeWork Services Store that offers discounts on everything from food and office supplies to business software; and WeWork Labs, which aims to provide early-stage start-ups with mentorship and financial resources.

But the crowning jewel, really, is the flexi-office company’s white label product: Powered by We (PxWe).

In April 2019, WeWork announced its newly launched product in a move that marked its departure from its core rent arbitrage business.

With PxWe, large enterprises would no longer have to move into a WeWork space; rather, the co-sharing giant would offer customised design and renovation packages to enterprise companies, which comprise almost 30% of its revenue.

It was a bold, if ill-timed, move to grow its profit margins. At the point of the launch of PxWe, WeWork was already quietly leaking over a billion dollars.

If you’ve been following this piece closely, we earlier mentioned WeWork boasts 836 co-working spaces around the world. That’s pretty darn staggering. Its business is built around the flywheel model – that’s to say, one that’s designed to benefit tenants, landlords and WeWork as a whole by encouraging constant growth. Obviously, that’s gone down in a shambles since.

In its IPO filing with the US Securities and Exchange Commission, WeWork highlighted its plans for aggressive expansion across 280 cities – and valued the opportunities for market growth at US$3 trillion.

This, coming in the face of net losses totalling US$4.3 billion over the past 3.5 years, seems wholly ludicrous.

Plans for WeWork to lay off 15% off its 15,000 employees had previously stalled – oweing to the fact that severance costs would be far too high for the company.

SoftBank’s injection of funds could only bide WeWork more time, and appears to be a desperate move to save a cash-burning business model that placed little emphasis on long-term growth. Without a clear idea of profitability, WeWork’s business model was set up for failure.

Even billionaire activist investor Bill Ackman revealed his skepticism surrounding the bailout, saying it’s likely the workshare company’s worth “has a high probability of being a zero.”

The truth hurts, even if it may be a dramatised one.

To put things into a local context, grocery startup honestbee was recently granted a four-month moratorium for its US$209 million debt. Despite its best attempts to innovate – as in the case of tech-enabled grocery and dining experience Habitat by honestbee – the distressed company was revealed to be burning US$6 million monthly.

A poor lack of direction – and compensating for this through aggressive spending – could ultimately spell financial trouble, no matter how forward-thinking a company’s services or products may be.