When Should You Actually Sell Your Stocks? 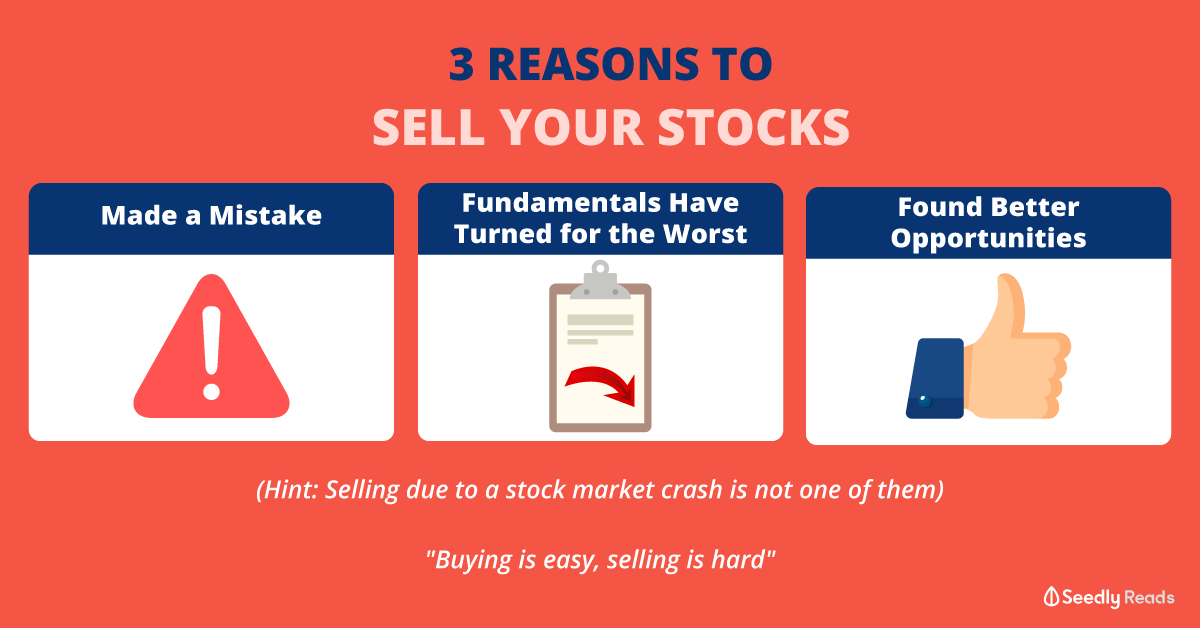 When Should You Actually Sell Your Stocks?

There’s a famous maxim in the investing world that goes like this:

“Buying is easy, selling is hard.”

We can spend weeks and months analysing a company.

But when the company’s shares crash for temporary reasons, we might panic-sell in an instant due to fear, erasing all our efforts spent on doing our due diligence on a stock.

That emotionally-driven action would be detrimental to our long-term investment returns.

Here are three guidelines to help us determine rationally when to sell a particular stock.

(Hint: Selling due to a stock market crash is not one of them.)

1. When a Mistake Has Been Made

The first reason is an obvious one.

This happens when we make a mistake in the original purchase of the stock, and the company is not as favourable as originally thought to be.

To handle this situation, we must have self-control and the ability to be honest with ourselves.

Oftentimes, ego gets in the way, and we may not want to admit that we have made a wrong decision.

But there are opportunity costs involved by holding on to a losing stock as the money could be put into far better companies.

When we realise we have made a mistake with our investment and we thoroughly learn from it, we won’t make the same error again in the future, helping us grow as an investor.

I have made many mistakes myself in my investing journey, and one of them was buying into Sembcorp Industries Limited (SGX: U96) after the 2014 oil price crash.

From that episode, I learnt to avoid commodity-related business as it’s hard to predict the price trajectory of a commodity like oil.

(You can now bookmark this article using the Seedly Bookmark feature so that you can refer to it whenever you need it!)

2. Business Fundamentals Have Turned for the Worst

When investing in stocks, there are a couple of things to look out for.

Some of the factors are whether the company has:

If something has fundamentally changed within the company or its industry since you bought the stock, it could be a good reason to sell.

A great example is that of the telecommunications industry.

Telcos were popular among investors back in those days as they were seen as defensive.

They provided essential services that no one else could. No matter what the economy went through, people would still need a telco subscription service to communicate with their loved ones.

And that gave the telcos predictable recurring revenue and cash flow.

However, the grip by the incumbent telcos on the consumers was loosened when competitors and services such as new telcos, WhatsApp, and Netflix started to enter the market.

Keen competition has caused telco stocks like Singtel and StarHub Ltd (SGX: CC3) to perform poorly over the past couple of years.

From the chart above, we can see that Singapore’s stock market benchmark, the Straits Times Index (as represented by the purple line), has clearly outperformed Singtel (dark blue line) and StarHub (light blue line) over the last five years.

The third reason to sell is to raise funds to buy into a better company with better prospects than the current invested one.

This is harder to determine than the first two as it’s never easy to know for sure if the other company is indeed a better buy than the one we are vested in.

A clear-cut example of this would be when we are vested in a local public transport company, but we feel a tech business listed in the US with worldwide operations has better growth opportunities, allowing us to grow our money faster.

In that case, it could be worthwhile to sell the former’s shares and buy the latter’s stock.

Many investors approach the buying of shares methodologically but don’t have a similar stringent framework when it comes to selling shares.

Selling a company’s shares due to fear of a market crash is a major no-no.

Or pressing the “Sell” button because the stock has gone way up in price (without any regard to growth prospects) is also not encouraged.

Hopefully, by internalising the three reasons to sell a stock, we can become better investors over the long run.

Further reading: If you want to learn more about when to sell stocks, you can also check out Chapter 6 of Philip Fisher’s well-known book Common Stocks and Uncommon Profits and Other Writings.

Why not check out the SeedlyCommunity and participate in the lively discussion surrounding stocks and more!