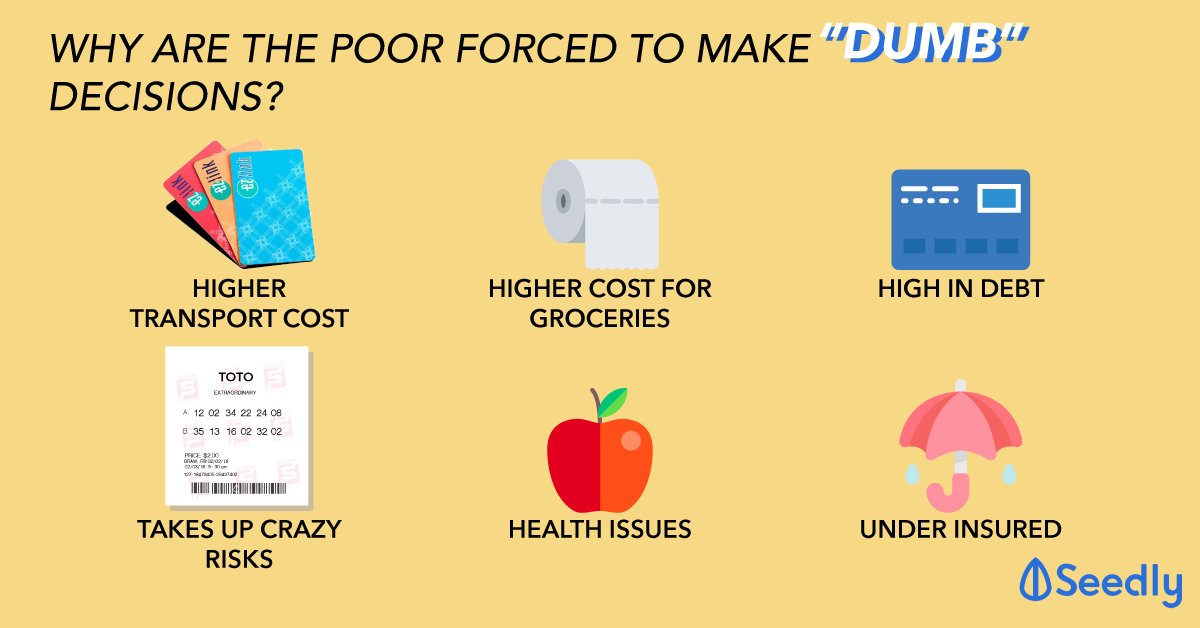 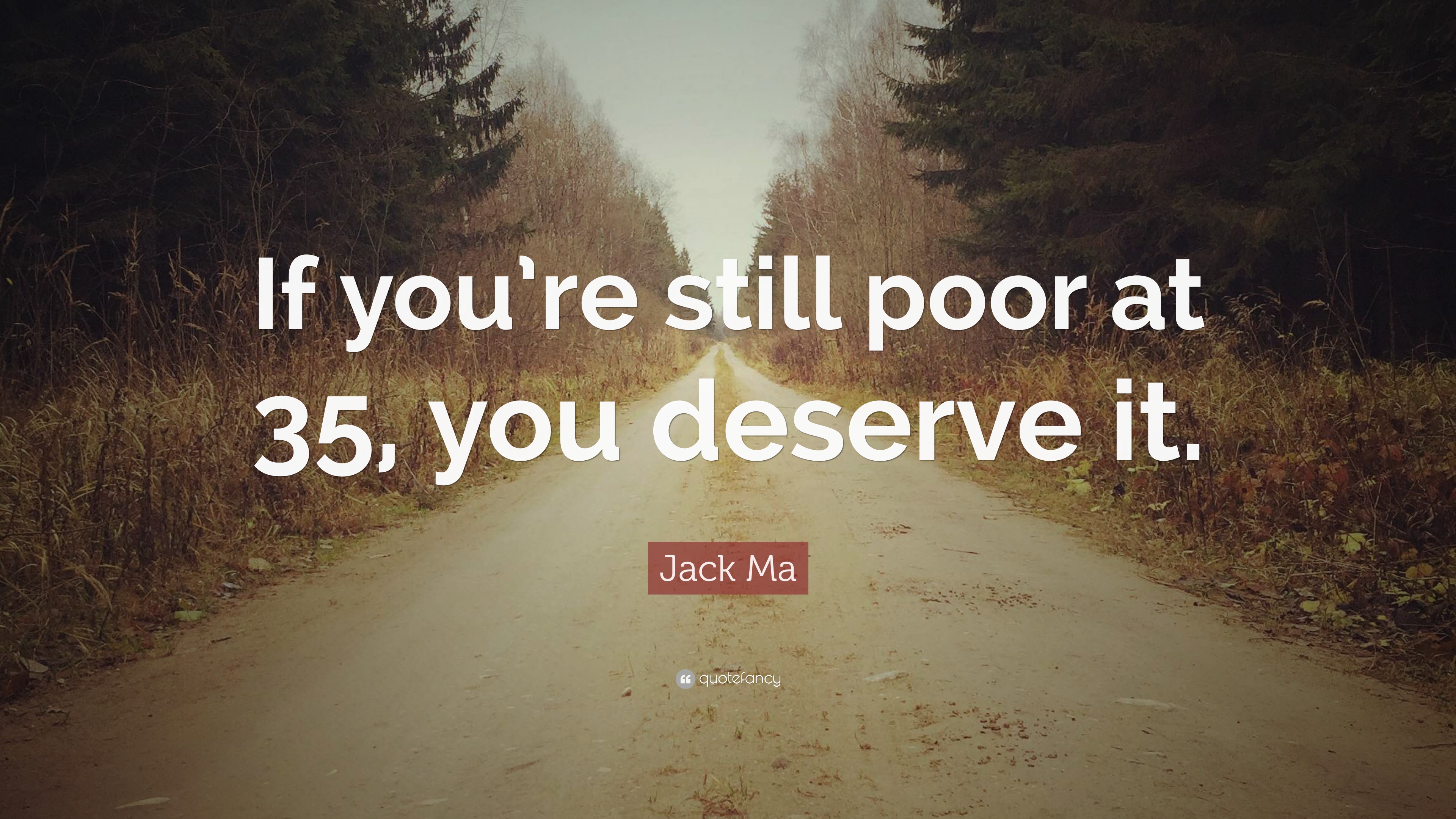 While that quote works very well as an inspirational quote, it may not be an accurate reflection of what poor means today.

It is easy to look upon a cash-strapped family and conveniently blame the poor decisions they make as the reason for their plight.

Yet, when placed in the same situation, many will end up committing the same mistake of making the same poor decision. All this, proven by research.

How poor are Singaporeans?

This is an example of how the rich get richer.

It may be hard to imagine how it feels like to be earning less than your monthly expenses, but here are some ways that poor people make bad decisions.

Put yourself in their shoes where you can hardly make ends meet to understand these decisions better.

Ways that low-income Singaporeans may be making poor decisions 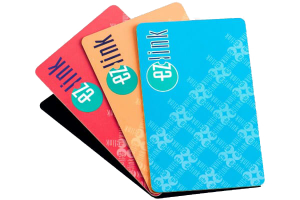 An EZ-link card is sold at $12 at TransitLink Ticket Offices, Concession Card Replacement Offices and Passenger Service Centres. Of which, $7 is the stored value for use, and the remaining $5 is the cost of the card and it is non-refundable.

For someone with difficulty paying for their basic needs, $12/ $10 can be a steep amount to folk out. They hence, end up paying for one-time transport passes which are more expensive in the long run.

Buying goods in bulk creates an economy of scale which lowers the cost per unit of goods.

This applies to grocery shopping too.

The same theory applies to almost all the groceries and daily necessities.

For someone whose aim is to get toilet paper without expanding much of his liquid cash, they end up making the irrational decision of getting a 10 toilet roll pack.

Society today is fundamentally more hostile towards individuals that are less well-off.

This might have forced less well-off to “conceal” by spending beyond their means just to look average.

According to Credit Counselling Singapore, debtors who overborrowed typically carry S$100,559 of personal debt on average when their household income is only S$3,359 on average.

Breaking the modern day poverty cycle through 4D and TOTO

Unlike the past, modern-day poverty is less obvious. 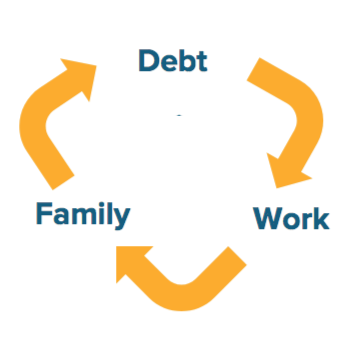 In fact, for the first 20 years of our working life, this is the cycle we are in:

For someone earning a comfortable salary, this cycle works.

For the lower income earner when the income from work is insufficient, they turn to instruments that they are familiar with to break the poverty cycle. 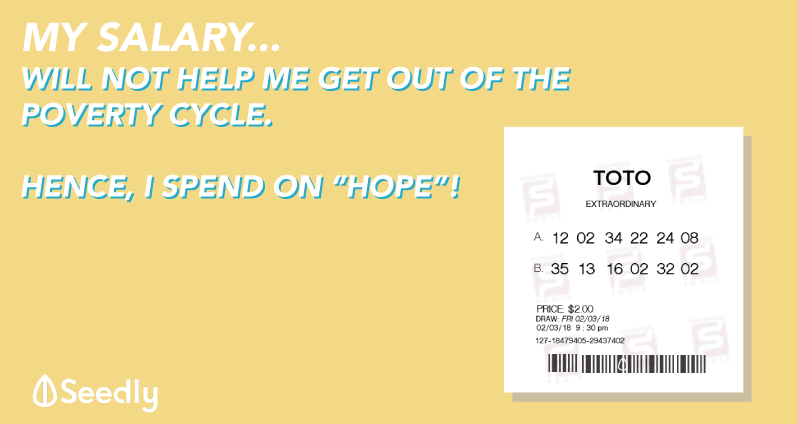 Such instruments include high risks activities such as 4D, TOTO or even heading to the casinos. For TOTO and 4D, the barrier of entry is rather low, for as low as S$1, making it an easy instrument, in hope of break the poverty cycle overnight.

Insurance coverage is the least of their concerns

When forced to choose between paying the premium for an insurance policy, or spending the money on the next meal, the choice is obvious.

With insufficient coverage, any future implications will erode a bigger portion of one’s wealth.

We can go on and on about how poor people make bad decisions:

Further reading: How can being poor decrease your IQ?

A quick lookup on some of the statistics will indicate a few things:

In fact, poverty decreases one’s IQ by 13-14 points due to their mind constantly being preoccupied with worries of the plight they are in. Immediate concerns such as bills, costs of next meal constantly preoccupies their mental capacity to do anything complex which can be crucial to them escaping from the poverty cycle.

This is on top of society’s prejudice, which automatically categorises poor people as “dumb”.

Even further reading: The test

Anandi Mani, a research fellow at the Centre for Competitive Advantage in the Global Economy at the University of Warwick, suggests that small interventions at appropriate moments to help poor people access services and resources could help them break out of the poverty trap.

Her team carried out two sets of tests.

The first test result reveals that low income scored considerably lower when it comes to the S$1,500 repair job question.

In the second test:

The second test result reveals that when the farmers were comparatively poor, they scored substantially worse for the tests.