In this article, the co-founder of The Woke Salaryman speaks about his thoughts and opinions towards dangerous thoughts we could have as salaried employees in an organisation.

Here are some common mindsets which might potentially be dangerous to have, and how you can overcome them. 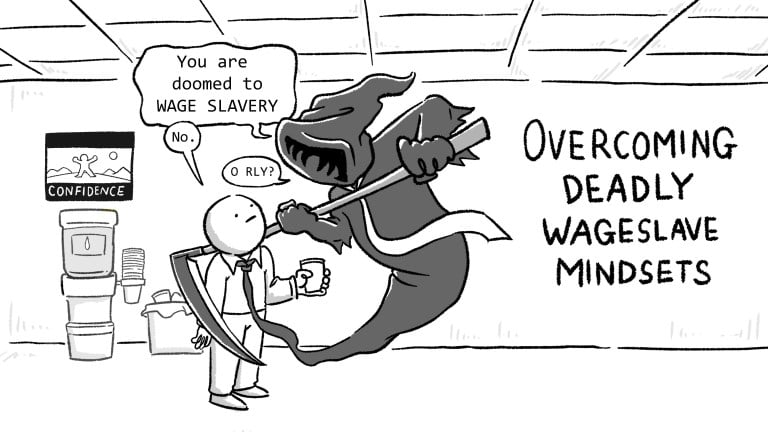 I’ll just put the bitter truth upfront:  As salarymen, I’d go as far as to say that having a stable salary makes it incredibly easy for one to slip into a state of complacency.

Now, don’t get me wrong and start raging. I’m not saying salarymen are lazy.

Nor is this article about why ‘thinking like an employee’ is bad.

What I’m saying is that the comfy white-collar, stable-income you take on has risks that you might not even be aware of.

One of them is becoming less driven, less enterprising, and less relentless because you have outsourced your survival to your corporate overlords – I speak from experience.

The real game-changer for me?

Challenging my preconceived notions on what was an ‘employee’ was, and seeing myself as a business instead.

Here are the most common thoughts that plagued me as a salaryman, and how I got over them by changing how I think. 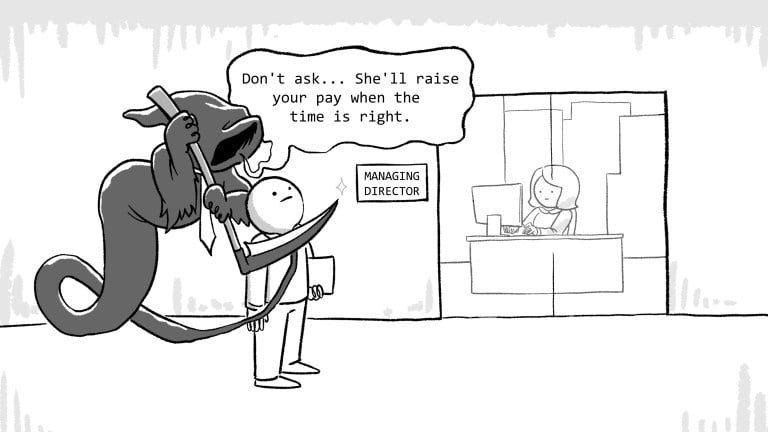 Many are unwilling to ask for a pay raise, yet expect one to be handed to us on a silver platter every year.

But here’s a question: Do you concern yourself with whether or not your favourite Nasi Padang store raises their ridiculously low prices?

And here lies the lesson – no one has naturally more motivation than you in getting better remuneration.

You should be the most influential force driving this, not your boss, not your colleague, your grandpa, etc.

That’s why they consistently raise their prices to keep up with market rates.

And they don’t ask for your permission before they do so.

It’s possible two people get paid differently for the same job, simply because they asked for it.

“I’m Underpaid but Don’t Want To Side Hustle” 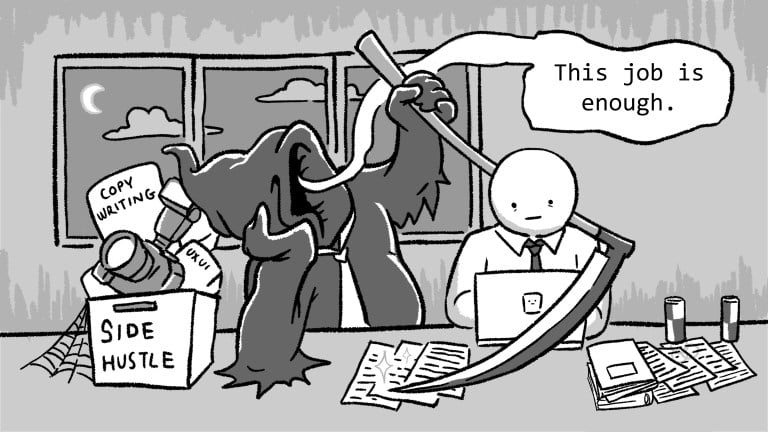 This is another mental hurdle I used to have.

I knew my salary was below that of my peers, but for some reason, I had this thought that my only form of income should be my day job.

That it was ‘the right and only way to earn money’.

From what I know, this affliction also affects many Singaporeans who think that side hustles or moonlighting are for people who ‘can’t have a proper job’ – there’s a negative stigma attached.

Now, I want you to imagine yourself as a business owner of say, a law firm.

You have one major client, but for some reason, this client pays you way below the market rate. What’s the logical thing to do?

It’s not to sit around and sulk – It’s to go out and look for more clients.

“My Job Has a Lot of Politics/I Am an Introvert, I Just Want To Do My Job and Get by” 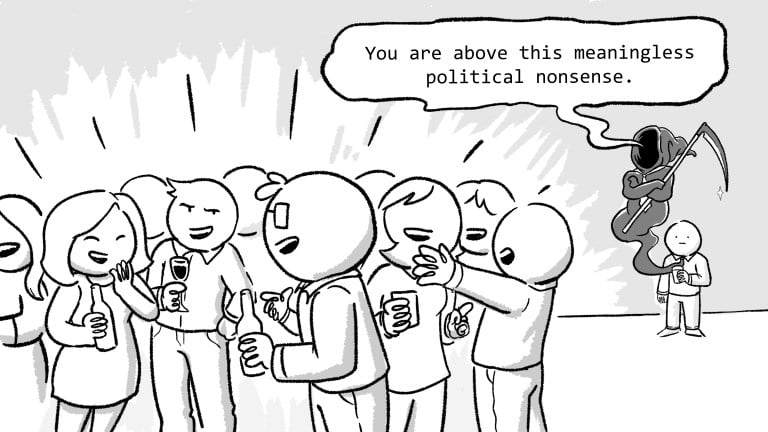 I hate politics too, but unfortunately, anything that involves more than one human being will have at least some politics.

Cliques form, you get treated unfairly etc – we get it, it sucks and it’s unhealthy for your mental health.

What’s next though? Most business people, faced with your circumstances, will do one of the following:

If you think politics in the office is bad, wait till you see politics outside the office.

People go all out to network, get close to clients, and build relationships.

Playing politics is a legitimate (if much despised) way of getting ahead in business, and life.

Many people use it to make up for the lack of value they can bring to the table.

Once you see it that way, it becomes a lot clearer what you have to do.

We’re not asking you to become a backstabber, we’re telling you that you need to be aware of power dynamics in any company you are in.

If you’re saying: “Oh but I don’t like networking or pretending to like people” – well, all fine and good, we’re just saying that there’s a cost to that.

And it often means lower pay.

You either learn the skill, accept lower pay, or be damn undeniably good at your job so that people will have to rely on you no matter what.

“This Job Is Not Stable, Prospects Not Good”

This is something I struggled with in the past as well.

I used to think that a stable job is a good job.

As I grow older, I’ve realised it’s far more complex than that.

Stability is not the be-all and end-all of jobs.

Self-employed people understand that sometimes to land a big deal, you have to go for months and months without income.

And the same goes for regular employment – the higher you go up the food chain, the higher your stakes are – and yes, the pay is generally higher as well.

So here’s the thing more of us need to know: ‘Stability’ is only one factor in whether or not a job is great.

Other important factors include benefits, remuneration, learning or networking opportunities.

Putting too much focus on stability can lead to stagnation, which in the long run is far more damaging.

Believe it or not, I’ve heard people remark that they do not want to get paid higher simply because “I will be let go when hard times come.”

Reality check: In this new era, job stability is becoming a thing of the past.

Your job can be more stable compared to someone else, but really it doesn’t matter.

In my honest opinion, your marginal ‘job stability’ isn’t worth it getting paid less. 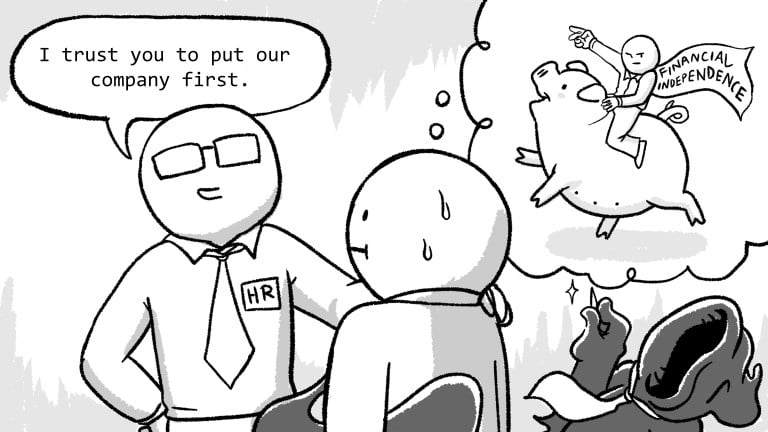 How many times have we been told we can’t do something because of the rules set up by Human Resources (HR)?

This is controversial and we are going to make a lot of HR folks angry when we say this – but your average HR personnel will usually be on your employer’s side.

After all, they’re paid by your boss.

So it’s completely understandable they aim to please their paymaster.

On the flip side, if you follow their rules, that means accepting stuff like no moonlighting, getting paid based on your last drawn salary, or even shit like discriminating against you because you are pregnant.

With this knowledge, our suggestion is you should decide what sort of person you want to be.

There’s nothing wrong with being a model employee who lives by the rules.

And there’s nothing wrong with putting your needs first before your employer.

Chances are the sweet spot lies in the middle of those two.

But if I had to think about it this way, it’s this: your employer hired HR to enforce their rules for their benefit.

The real question is this: