Wuhan Virus: Singapore Shares That Could Benefit or Be Affected
164
shares 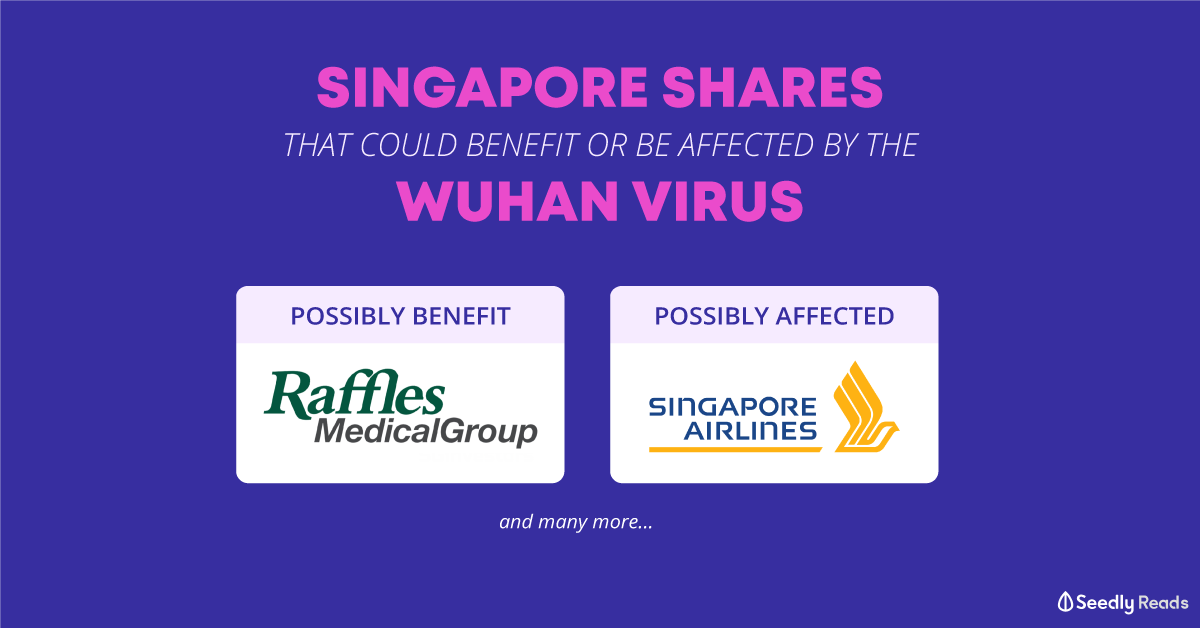 Like the Grinch who stole Christmas, the Wuhan virus has certainly stolen the festive mood this Chinese New Year. The only difference is that the Grinch is a fictional character.

As we celebrated the beginning of the Lunar new year, my WhatsApp chats were buzzing non-stop with updates by fellow concerned Singaporeans on the novel coronavirus and how it has hit our shores.

Fear surrounding the virus has also permeated to the stock market, with Singapore’s Straits Times Index falling 2.6% at one point on Tuesday (28 January).

Some Singapore shares, especially those with links to China where the virus originated, have fallen way more than the market itself, while share prices of some companies have risen given their healthcare exposure.

With that, let’s look at a couple of stocks that could benefit or be harmed by the emergence of the Wuhan virus. Do note that stocks mentioned here are by no means recommendations to buy or sell them. They merely serve as a starting point for readers to do further research if they wish to invest in them.

Singapore Stocks That Could Benefit

For one, companies involved in the healthcare sector could be beneficiaries of the outbreak.

Of the three, I like Riverstone, which is also one of the 36 Singapore shares to watch in 2020. In that article, I gave a brief summary of the business and its growth prospects:

There is a strong demand for its gloves as seen from its revenue growth over the years; revenue grew at an enviable rate of 23% per annum from 2014 to 2018. Over the same period, net profit climbed 16% each year.

To keep up with demand, Riverstone plans to increase production capacity by 1 to 1.5 billion pieces of gloves each year. It also expects both cleanroom and healthcare markets to grow and continue to gain traction. With gloves being a consumable product, clients will keep coming back to Riverstone for more.”

According to CGS-CIMB Research, Riverstone derives around 70% of its revenue from healthcare gloves.

Another potential beneficiary is private healthcare provider, Raffles Medical Group Ltd (SGX: BSL), which has hospitals in Singapore and China. The company has also been featured as a Singapore stock you can consider if you are new to investing.

In a research note, CGS-CIMB said that “Raffles Medical could be a medium-term beneficiary in terms of higher patient footfall redirected from public hospitals and more vaccinations”.

From the looks of it, it seems like there was opportunistic trading of shares in most of the companies mentioned above.

In fact, some companies have been persistently loss-making, while some have balance sheets laden with debt. Those stocks may not make for great long-term investments.

Buying stocks based on news flow is not a great way to invest at all. Stocks are not mere pieces of paper; they represent part-ownership in businesses. As such, investors should research the companies thoroughly and make sure they understand what the business is doing before investing in them.

Singapore Stocks That Could Be Affected

Since people are likely to curb unnecessary travel due to the Wuhan virus, companies in the travel, hospitality, and leisure sectors could be affected. Companies with businesses in China could be hurt as well.

For example, Straco’s shares fell around 11% on Tuesday.

After the stock market closed on Tuesday, Straco said that it has temporarily closed the three attractions in China since 25 January 2020. It added that the “measures are in conformance with the advice of the Chinese local authorities to help prevent the spread of the coronavirus and for the health and safety of all employees and visitors”. The re-opening of the attractions will be announced at a later date.

Units in Sasseur REIT tumbled 10% on Tuesday after the REIT’s manager announced that it has temporarily closed the REIT’s four outlet malls in China as a precautionary measure. It is not known yet when the malls will re-open.

Contrarian investors who view that the above-mentioned companies have the potential to do well for the long-term, and not be affected by short-term headwinds, could consider investing in them after doing their due diligence. SATS, Straco, and CapitaLand are also featured in the “36 Singapore Shares You Should Watch In 2020” article.

Disclaimer: The information provided by Seedly serves as an educational piece and is not intended to be personalised investment advice. ​Readers should always do their own due diligence and consider their financial goals before investing in any stock. The writer has a vested interest in some of the companies mentioned.