An Average Singaporean's Guide To: What Does The Yield Curve Inversion Mean? 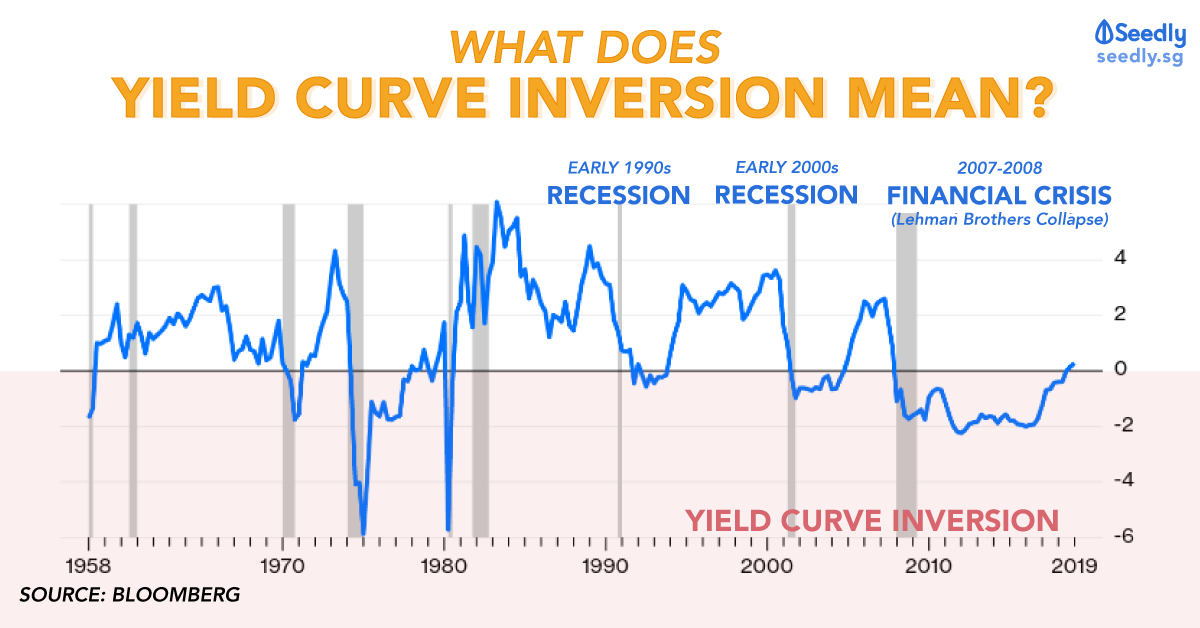 An Average Singaporean's Guide To: What Does The Yield Curve Inversion Mean?

The world is in a mess right now, and fear has caused a lot of volatility in the markets.

And that may get worse.

You may have heard about people talking about the yield curve inverting, and almost immediately forming a connection with a recession.

Let me first start by explaining…

What Is A Treasury Bond?

In return, the investor gets a fixed sum of interest paid each year. At maturity, the investor will get back the principal, or what we call the face value of the bond.

What Does The Yield Curve Show You?

The yield curve shows you the relationship between the yield-to-maturity (rate of return), and the maturity (duration).

The yield curve can act in 3 ways:

What Does A Yield Curve Inversion Tell You?

Think of it this way, if you invest in a bond, say, Singapore Savings Bond, you will want the 10-year rate of return to be higher than the 1-year rate of return. If not, there will be no incentive to keep it for a longer-term, right?

Why Is A Yield Curve Inversion Worrying?

You are not going to like it, but here’s why a yield curve inversion can be worrying.

An inverted yield curve may indicate that interest rates are expected to fall and signals a recession. The yield curve inverts before the last 7 recessions!

Everyone is concerned because past data have shown that after a yield curve inversion, a recession will ensue. The last time that happened was during the Global Financial Crisis.

The fact that there are many news reports that opined that the economy is going into the recession, is not helping.

Here is a brief overview of what is going on with the world:

Closer to home, here are some events making headlines:

What Can You Do As An Investor?

This is purely based on our personal opinion.

Before we start behaving like ants on the hot pan, here are some actionable we can do in time of such uncertainties.

Many are choosing to put their money into Gold and Silver, and it is understandable why. Safe-haven assets provide a hedge during uncertain market conditions.

Notice that these graphs are over a 1-year time horizon. From the graphs above, you can see how Gold and Silver have seen an increase in attractiveness with investors and/or traders? Imagine how much you would have made if you bought into safe-haven assets one year ago.

“Time in the market is more important than timing the market.”

That would essentially negate the first option up there… And I can of course, only say, to each his own.

It is getting increasingly hard to time the market, with so many problems going on in the world at the same time. Getting different opinions can also help you make a smarter financial decision.

Historical data is getting less and less relevant when we look at the present situation, with news changing incessantly.

Time to re-assess your risk profile and look at your portfolio holdings, to see whether you can buy/sell/hold!