DBS, OCBC and UOB: How Did They Perform in the 2021 First-Quarter?

DBS, OCBC and UOB: How Did They Perform in the 2021 First-Quarter?

Financial updates for the 2021 first-quarter (three months ended 31 March 2021) from Singapore’s listed banks have been filed with the Singapore Exchange.

The banks, which make up around 43% of the Straits Times Index, are slowly recovering from the economic headwinds brought about by the Covid-19 pandemic.

Here’s a look at how the Singapore banking giants performed financially in the first quarter of 2021. Continuing that is a previously published comparison of the banks’ 2020 financial ratios.

For easier navigation, you can click on the links below: 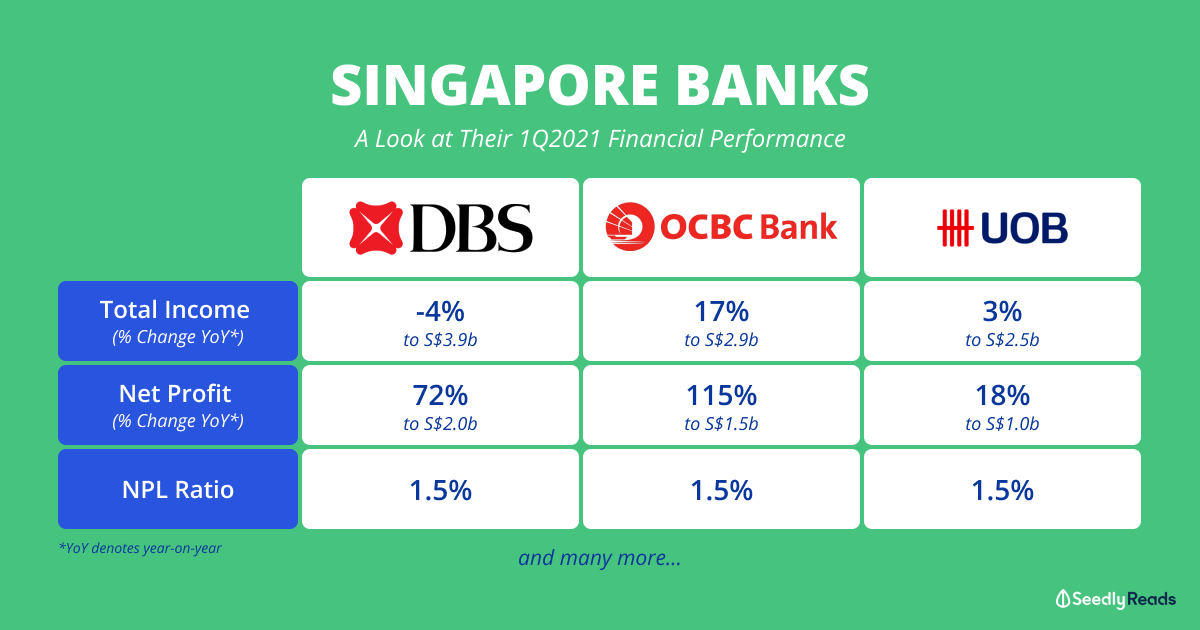 Broadly speaking, the latest net profits from DBS, OCBC, and UOB improved on a quarterly and yearly basis.

This is a vast improvement from the corresponding quarter a year ago when the banks reported that earnings fell from 19% to 43% year-on-year as they increased their allowances to prepare for risks arising from the deadly coronavirus disease.

The following table shows a comparison of key metrics from all three banks’ 2021 first-quarter:

Of the three banks, OCBC posted the highest yearly increase in total income of 17%.

However, the drop in net interest income was more than offset by higher non-interest income and income from life and general insurance under its listed subsidiary, Great Eastern Holding Limited (SGX: G07).

OCBC was also the best performer among the trio in terms of its net profit growth.

Its earnings more than doubled to S$1.5 billion, up from S$0.7 billion a year earlier. The huge jump was on the back of the income growth (as seen earlier) and lower allowance (which fell 75% year-on-year).

Non-performing loan (NPL) ratio generally improved across the banks. Coupled with lower allowances for the banking trio, it looks like the worst is over for the banks.

It is encouraging to see all three banks improving their return on equity (ROE) on a yearly basis. This ratio shows how effective a bank’s management is in maximising the profits earned from shareholders’ capital.

The banking trio continued to maintain robust Common Equity Tier 1 capital adequacy ratios of at least 14%, which are more than double that of the regulatory limit of 6.5%. This ratio is a critical measure of a bank’s financial strength.

Pssst… Did you know you can discuss with fellow investors about Singapore banks once you sign up for your free Seedly account?

DBS is the only bank that pays a quarterly dividend, and it declared a first quarter interim dividend of 18 cents per share, similar to the previous quarter.

In July last year, the banks had to curb their dividend payout after the Monetary Authority of Singapore (MAS) called on the local banks to cap their total dividends per share for 2020 at 60% of 2019’s dividends.

Since DBS pays a quarterly dividend, the guidance affects its 2021 first-quarter dividend payout as well, which will be the final one under the curb.

MAS also asked banks to offer shareholders the option of receiving their dividends in scrip instead of cash. Therefore, DBS’ interim dividend for the latest quarter will be available in scrip.

The issue price for the new DBS shares will be at the average of the closing share prices on 10 and 11 May 2021.

During its FY2020 annual general meeting (AGM), DBS’ chief executive Piyush Gupta said that “with increased optimism, many regulators around the world have started to let banks increase dividends”.

The Singapore regulator could take a similar stance and allow DBS to transition back to its pre-pandemic levels of dividend payout.

With the improved economy and strong earnings growth, all three banks have room to increase their dividends once the MAS dividend cap is removed.

Looking ahead, the interest rate environment is likely to remain subdued and rates could stay near zero over the next few years, affecting the NIM.

But overall, things are looking rosier than last year and that would bode well for the banks over the longer run.

Editor’s note: The information below was originally published on 3 March 2021. 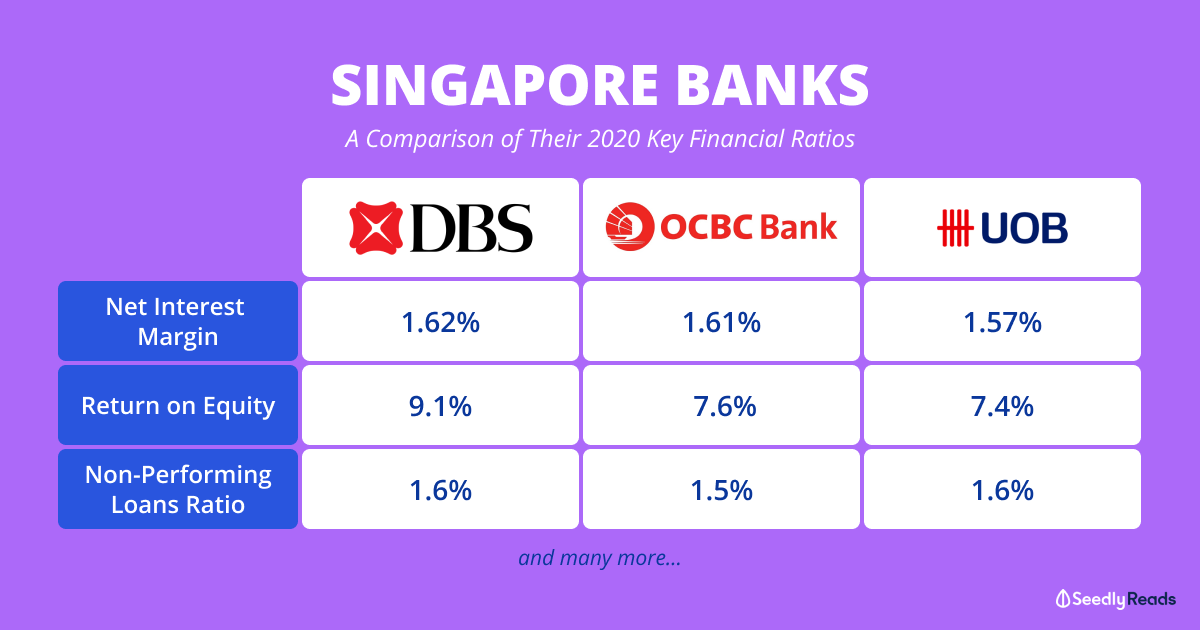 The following table shows a few key ratios that give us a better picture of the banks’ profitability (the “best” metrics are in bold):

Net interest margin (NIM): This is similar to the operating margin for a non-banking outfit. The NIM shows the average interest margin that a bank is earning from its borrowing and lending activities.

Cost-to-income ratio: This ratio measures the non-interest expense of a bank as a percentage of its revenue. It is used to gauge a bank’s efficiency and productivity. Generally, the lower the ratio, the more efficient a financial institution is.

DBS had the lowest cost-to-income ratio among the banks at 42.2% for the year.

Return on assets and return on equity: These tell us how effective a bank’s management is in maximising the profits earned from shareholders’ capital.

Among the three banks, OCBC had the best return on assets, and DBS had the highest return on equity for 2020.

Here is a table showing the key ratios that can give us clues on how strong the banks’ balance sheets are (the “best” metrics are in bold):

On the other hand, if a bank’s loan-to-deposit ratio is above that range, it might run into liquidity problems when there is a high withdrawal rate on deposits, especially during an economic downturn.

Among the three banks, UOB was the best at maximising the loans and deposits it had for 2020, given that it had the highest loan-to-deposit ratio in that year.

Non-performing loans (NPL) ratio: A non-performing loan is a loan on which the borrower is unable to pay off interest or the principal amount. The lower the ratio, the better it is for a bank.

Leverage ratio and liquidity coverage ratio: These ratios show the ability of a bank to meet its financial obligations. In general, the lower the leverage ratio, the better.

Among the three banks, DBS had the lowest leverage ratio while OCBC had the highest liquidity coverage ratio for 2020.

The table below reveals the banks’ valuation numbers (the “best” metrics are in bold; share price as of time of writing on 3 March 2021):

OCBC seems to offer the best value among the three banks with its lowest price-to-book and price-to-earnings ratios.

However, it loses out to the other banks in terms of dividend yield.

Income investors would love UOB as it has the highest dividend yield among the banks at 3.1%.

However, all three banks have depressed dividend yields as the Monetary Authority of Singapore (MAS) has called on local banks to cap their dividends for 2020.

With a dividend payout ratio ranging from 39% to 45% for the banks, there’s room for dividend growth once the MAS dividend cap is removed.