Can You Really Earn More Than $8,500 per Month as a Food Delivery Rider?
56
shares 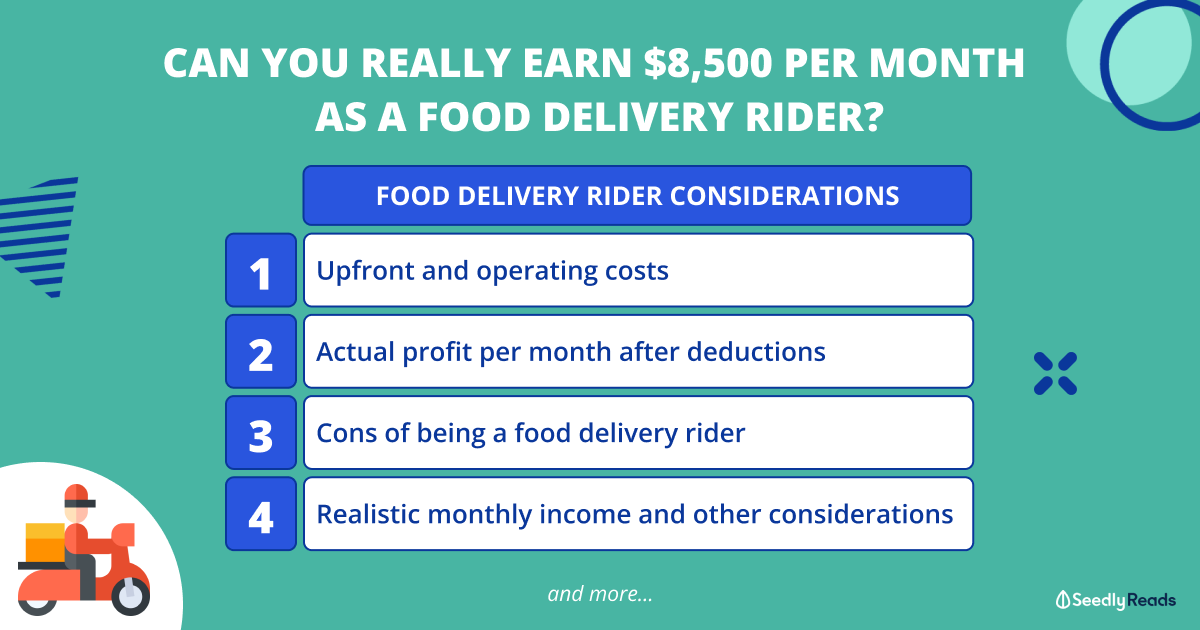 Can You Really Earn More Than $8,500 per Month as a Food Delivery Rider?

Recently, news of a food delivery rider allegedly earning more than $8,500 in a month from food deliveries went viral online.

That’s almost double the median monthly income of Singaporeans at $4,680 (including employer CPF).

But like many of you, I had my doubts.

Thus, I went down the rabbit hole with a couple key questions:

Let’s dive into the numbers and find out!

After sweeping through multiple forums such as Hardwarezone and Reddit, the general consensus is that earning $8,511.64 in revenue is indeed possible.

You’ll need to consider the operating costs and the cons of the job that we’ll cover later on.

Here’s a brief overview of how it was done based on general consensus online:

Upfront Costs to Be a Food Delivery Rider

If you’re looking to earn anywhere close to $8,000 a month, you’ll need to own a motorbike.

Already riding one? Great! You won’t have to deal with upfront costs.

But for the rest of us, expect to fork out:

To be safe, you would need to budget at least $900 per month as these estimates do not factor in costs such as interest rates, accidents, and your bike’s depreciating value.

Using our estimated operating costs, this delivery rider generates roughly $7,800 in profit per month, or $21 an hour, assuming that the rider works a conservative 12 hours a day for 31 days.

Talk about exchanging time for money.

While the money does look very enticing, you’ll need to consider several things.

This means you’ll have to sacrifice most of your personal time and really hustle.

Long working hours will also put a great physical and mental toll on your body.

Ever fell asleep at the wheel? You’ll know how dangerous that can be.

Moreover, you’ll have to bear the brunt of nature’s wrath under Singapore’s blazing sun or the heavy rain that has been pelting Singapore as of late.

As if that wasn’t enough, you’ll have to bear the risk of road accidents and miss out on things like workplace injury compensation, employer’s Central Provident Fund (CPF) contributions, medical insurance, and paid leave.

In the longer term, riders face insufficient opportunities for upgrading and reskilling and the lack of career progression.

What’s more, you may also have to deal with nasty customers and vendors too.

On the bright side, food delivery companies have stepped up by providing insurance coverage for their riders.

Grab has rolled out personal accident insurance in 2019 and has since introduced insurance for prolonged medical leave.

FoodPanda also offers insurance coverage, including for accidental death and accidental medical expenses, from S$9 per month, while Deliveroo provides over 9,000 riders with accident and injury insurance free of charge.

Is earning $8,500 in revenue sustainable in the long term? I’d say it’s a definite no.

If you’re considering being a full-time food delivery rider, a more realistic estimate would be somewhere between $5,000 to $6,000 a month.

That’s if you work really hard (12 – 15 hours a day with Mondays and Tuesdays off) and own a motorbike.

Some delivery riders have reportedly earned a similar amount on an e-bike or bicycle, but you’ll also have to consider the additional toll it has on your body.

But with COVID-19 restrictions easing, fuel prices rising, and possible changes in earnings from food delivery services, your monthly income may also take a hit in the future.