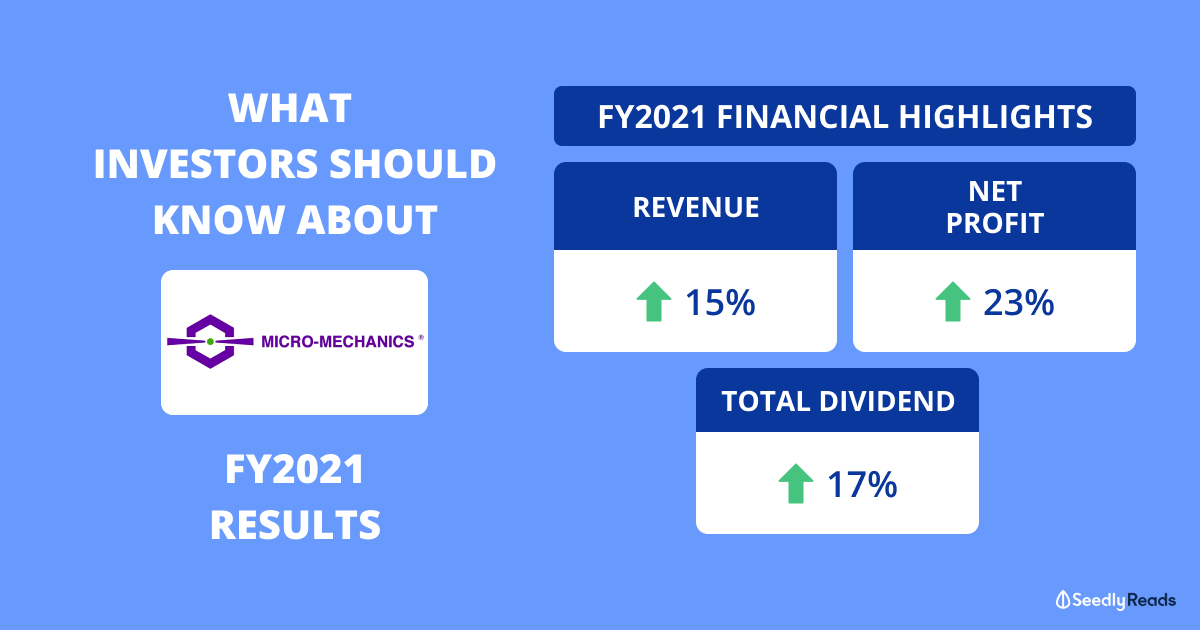 Micro-Mechanics (Holdings) Ltd (SGX: 5DD) is involved in the designing, manufacturing, and marketing of consumables and precision tools that are used in the semiconductor industry.

The company recently released its financial results for its fiscal year ended 30 June 2021 (FY2021) where there was strong revenue and net profit growth, continuing on from its stellar past performance.

Shareholders will be delighted to know that Micro-Mechanics has increased its total dividend for the year as well.

The company has benefited from the resilient global semiconductor industry, which continued to show steady growth amid economic headwinds from the pandemic.

The majority of Micro-Mechanics’ market saw double-digit growth, with the exception of the Philippines, Japan, and Taiwan.

Sales for the Singapore market surged 33% to S$7.2 million.

With a slower increase in the cost of sales, Micro-Mechanics’ gross profit margin for FY2021 improved to 54.3% from 53.4% a year back.

Micro-Mechanics’ gross and net profit margins are high in my books and show that the company has competitive advantages over its peers.

Free cash flow is money that Micro-Mechanics can use to reinvest into its own business, acquire other businesses, pay dividends to its shareholders, or buy back its own shares.

For FY2022, Micro-Mechanics said it expects to incur a capital expenditure of around S$6 million.

The increasing ROE shows that Micro-Mechanics’ management is doing an excellent job in using shareholders’ capital to grow its business.

The World Semiconductor Trade Statistics (WSTS) expects global semiconductors sales for 2021 to grow by 19.7% to US$527 billion, compared to its previous projection of US$488 billion made in March 2021.

Over the longer term, global chip sales could double to nearly US$1 trillion by 2030 from about US$450 billion in 2020, according to VLSI Research.

The semiconductor industry is indeed set for a prolonged period of strong growth as chips become increasingly relevant in nearly every aspect of our lives.

Micro-Mechanics forecasts its total addressable market for its business to be over US$500 million. With revenue of around US$55 million in FY2021, the company has plenty of opportunities to grow its business.

At Micro-Mechanics’ share price of S$3.27, it has a price-to-earnings (P/E) ratio of 25x and a dividend yield of 4.3% (including special dividend).

Disclaimer: The information provided by Seedly serves as an educational piece and is not intended to be personalised investment advice. ​Readers should always do their own due diligence and consider their financial goals before investing in any stock. The writer owns shares in Micro-Mechanics.