Selling My McDonald's Hello Kitty Collection: How Much Can These Toys Earn?
773
shares 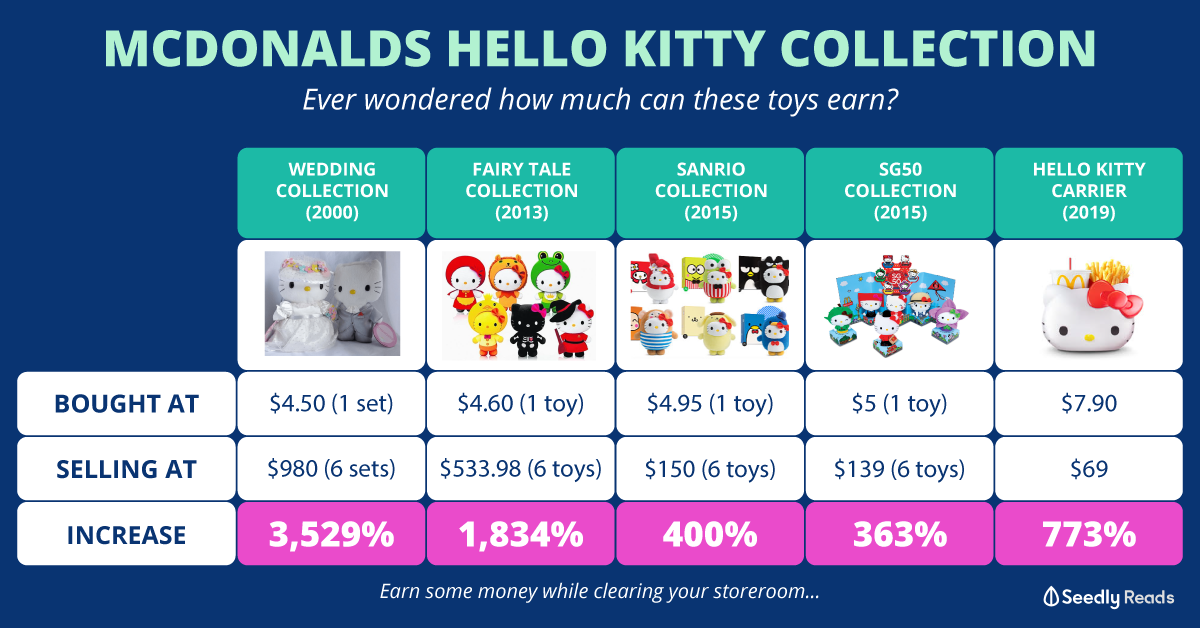 There’s an art that most Singaporeans have mastered: the art of queueing.

Ask a Singaporean what are the top ten most popular things to queue for, and most would have this in their lists: McDonald’s Hello Kitty Collection.

Created in 1974, Hello Kitty is a female white Japanese bobtail cat who has since gone to become one of the most famous fictional cats ever.

It is the second highest-grossing media franchise (right behind Pokémon) of all time, grossing over USD$80 billion to date.

Its popularity has created a cult-like following, with Hello Kitty adorning collections of various products all over the world.

There are Hello Kitty-themed planes.

Even a Hello Kitty-themed maternity hospital.

Made it to the London Fashion Week SS20 too. *slow claps*

In Singapore, McDonald’s has released several collections of Hello Kitty toys over the years, with each release sending the nation into a frenzy.

It was a common sight for Singaporeans to be queueing in the wee hours of the morning whenever there were new Hello Kitty releases, with some camping overnight for these goodies.

This was a queue outside Mcdonald’s on a rainy day.

Pandemonium (or some say, pande-meow-nium) sometimes ensued during these highly tense situations, with sleep-deprived individuals keeping an eye on the furry prize.

Policemen were sometimes activated to mediate the situation between disgruntled customers.

My family wasn’t spared from this craze.

I remember my dad lugging home pairs of Hello Kitty plushies with a smile on his face.

Okay lah not as scary as this.

I marveled at these toys for about half an hour, and they ended up in my storeroom for the next 15 years.

After discovering them a few years back, I sold them on Carousell for $8 for a pair.

That was before I discovered how valuable they could be on other platforms like eBay, where they could fetch SOLID prices.

I decided to take a look at how much these popular Singapore Hello Kitty collections could earn you.

With that, let’s take a trip down the memory lane!

TL;DR: Selling My McDonald’s Hello Kitty Collection: How Much Can These Toys Earn?

In 2000, McDonald’s launched its first viral Hello Kitty collection in Singapore, which featured wedding designs with the purchase of Extra Value Meals.

This promotion began on 1 January 2000, with one design released weekly on Thursdays.

Each set featured Hello Kitty and her companion Dear Daniel, both donning on different wedding costumes.

With the cost price of each pair at $4.50 (with any extra value meal purchased), a spokesman of Mcdonald’s revealed that the entire line could fetch as much as $980.

This means that spending $27 (and lots of queueing time) could potentially earn you $953.

Probably the most huat short-term investment. 🤯

The overwhelming demand probably caused this price hike, where logistics and security support were needed for crowd control, and even the traffic was disrupted due to the queues.

There were even glass doors shattered during the chionging (Hokkien: to rush or charge), or fistfights between angry kitty fans.

Over 2.8 million toys were sold during this promotion, and this event probably unearthed one of Singaporeans’ greatest talents – queueing.

In 2013, Mcdonald’s launched another series of Hello Kitty Characters dressed in outfits of popular fairy tales.

One plush toy was released every week from 30 May till 3 July.

The release of “Singing Bone” Hello Kitty, the limited edition toy of the set, resulted in crazy queues outside Mcdonald’s outlets islandwide once again.

This limited edition version was available on the black market shortly after they went on sale, bidding at prices from $50 to several hundred dollars.

This time, the toys were dressed as other famous Sanrio characters such as Kerokerokeroppi and Bad Badtz-maru.

Congruent to our #asianspirit, Singapore was the first in the world to get this collection.

For this collection, McDonald’s launched a website and it was available for purchase online for the first time.

However, online sales were suspended within 80 minutes due to an overwhelming response.

They were also shortly sold on eBay, fetching nearly $200.

A set of this collection was going for $150.

Compared to the previous two collections, the value of this set pales slightly in comparison. 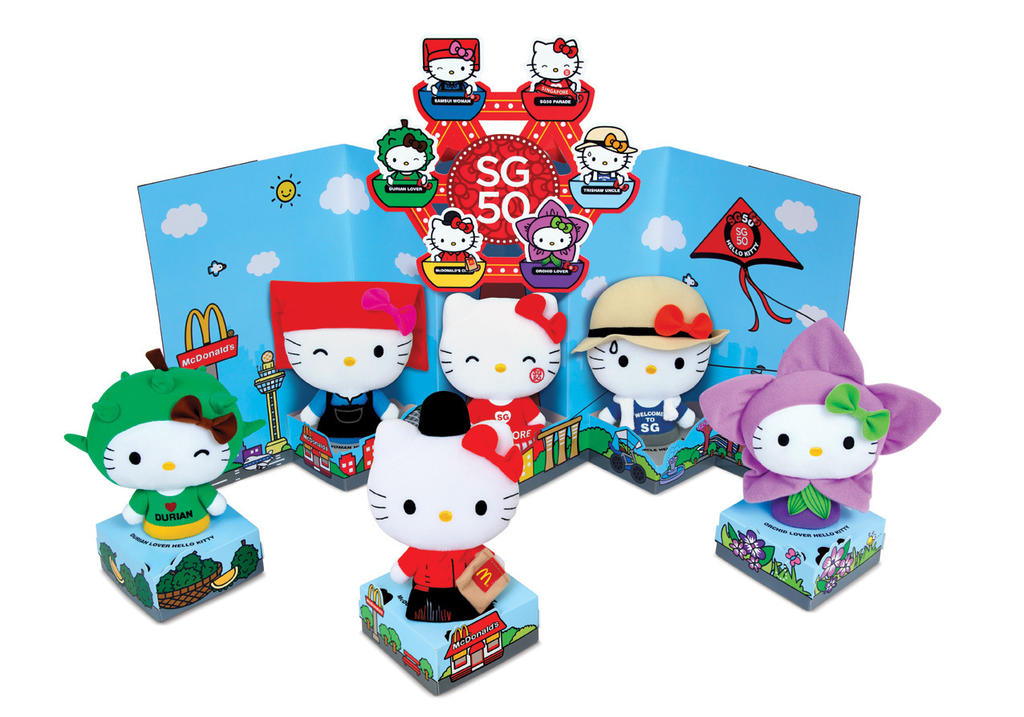 There were tons of celebrations to commemorate the nation’s 50th birthday, back in 2015.

Naturally, the Hello Kitty collection HAD to be part of it.

The local-themed series featured characters like the samsui woman, trishaw uncle, and durian lover. (Damn, now I feel like having some durian.)

These toys remained as popular as before, as it could be seen from the participation of a giveaway contest (of the complete set) held by The Straits Times, where more than 450 people have entered.

Similar to the previous rounds, each toy could be purchased at $5 with every purchase of an Extra Value Meal.

A quick look at Carousell shows a listing of this collection selling at $139.

A deviation from the usual plushies, but still super pops (read: popular).

With the launch at 7am, queues started forming at midnight.

There were also people who re-joined the queue due to the limit of two carriers each transaction.

One carrier costs $7.90, and listings started appearing online shortly after it was available, with inflated prices of up to $50 per carrier.

Never knew so many people were looking for a swankier way to hold their fries and drinks.

Though crowds were still crazy, the situation seemed to be a lot better controlled as compared to 19 years ago.

A quick glance at eBay showed a couple of listings in the range of $60s, with one which was seeking for $3500 (seemed like a troll).

Where Can You Sell Your Hello Kitties?

Nevertheless, there are some good prices spotted on local online marketplaces too.

Here are some websites you can consider:

eBay currently has the largest collection of Hello Kitty items listed, and seems to reach the international crowd the best.

It’s intriguing to see how Hello Kitty has taken Singapore by storm, and weathered through different decades with the same level of popularity.

With this magical Hello Kitty wand, McDonald’s commands snaking queues whenever a new series is launched.

These episodes are so uniquely Singaporean, bringing out both the best and worst of us.

It doesn’t matter whether you hate or love this white mouthless cat.

Hello Kitty is here to stay.