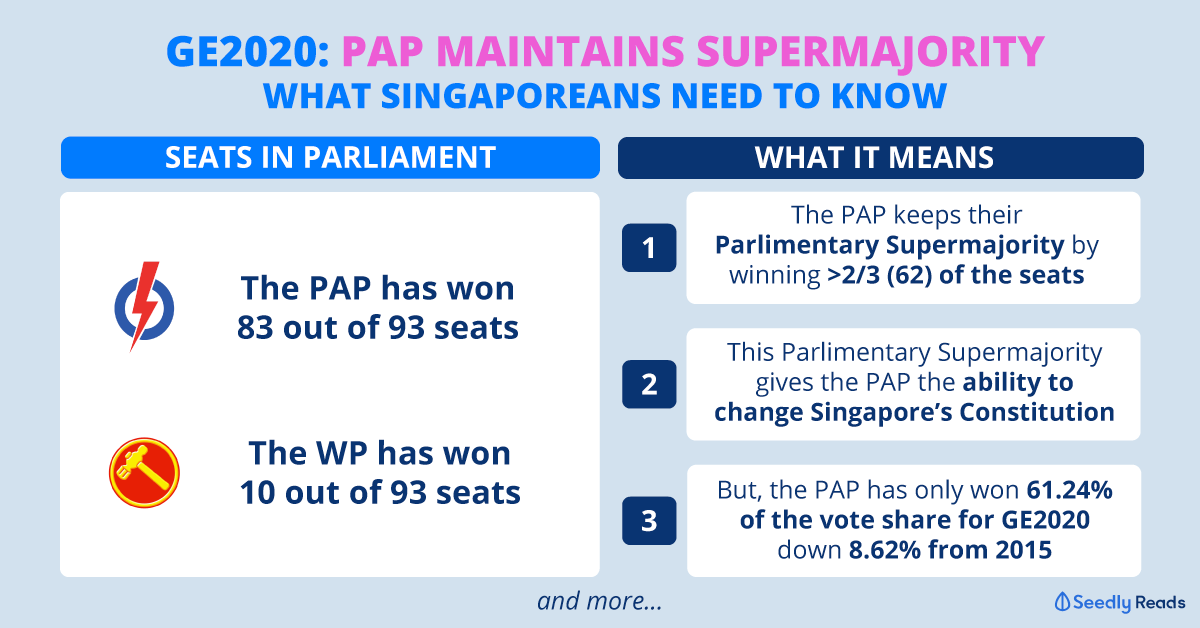 The people of Singapore have decided.

As of today (11 July 2020), the People’s Action Party (PAP) has been elected into parliament with a Parliamentary supermajority.

The year’s General Election 2020 (GE2020) has been dubbed a ‘crisis election‘ by Prime Minister Lee Hsien Long, as Singapore grapples with COVID-19, rising unemployment as well as a deepening recession.

I would think that this election is a pivotal one to our address concerns about the economy, the nation’s finances our jobs, our health and the challenges ahead.

If you would like to know more about the parties and their key policies about the economy, jobs and taxes: check out our piece about the manifestos of these parties. 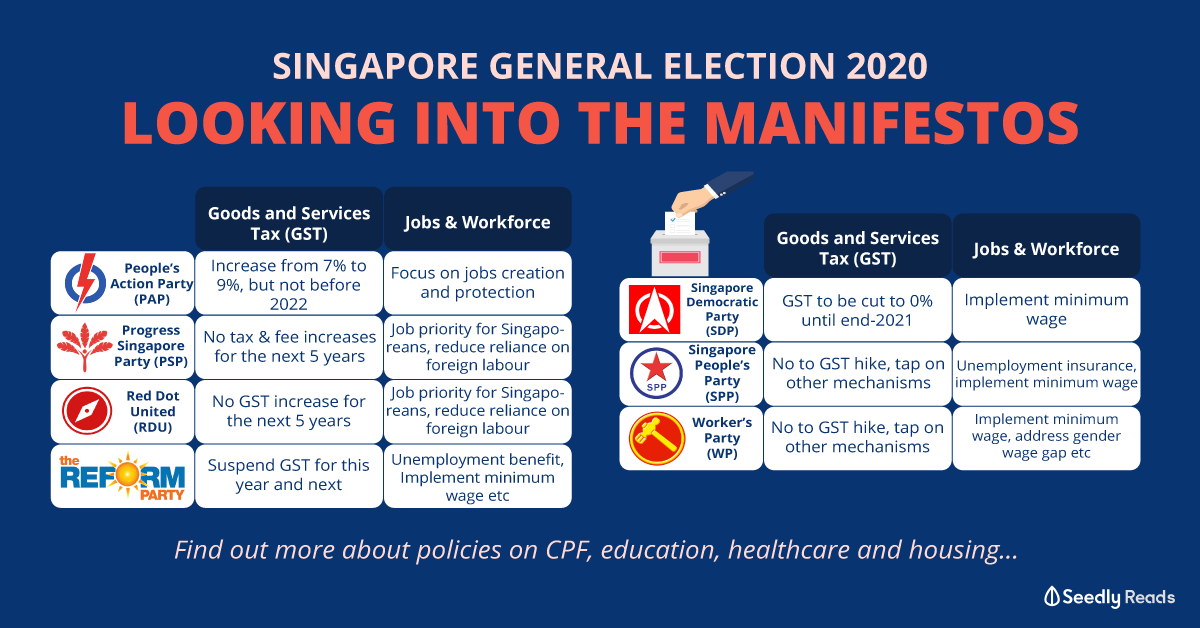 As the dust settles on this election, we breakdown the results and what it means for Singaporeans.

History has been made in Singapore.

PAP has lost the most number of seats to the opposition since independence, ceding the Aljunied GRC, Sengkang GRC and Hougang SMC to the Worker’s Party.

Furthermore, PAP’s vote share fell to 61.24%, down 8.62 percentage points from the 2015 General Election and one of PAP’s poorest showings in years.

However, the PAP still retain the Parliamentary supermajority.

What is a Parliamentary Supermajority in Singapore? 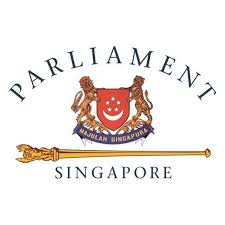 Together with the executive and judicial branches, they form the Singapore government.

Singapore’s Parliament has 93 seats for the elected MPs.

According to the book Constitutional Change in Singapore Reforming the Elected Presidency, a party will have to win half the seats in Parliament to form a simple majority.

To obtain a supermajority, a party will have to win 62 out of 93 or two-thirds of the seats in Parliament.

For GE2020, the PAP won 83 out of 93 of the seats to form a Parliamentary supermajority. The WP took up the rest of the seats.

The PAP has yet again maintained this supermajority which they have held since 1959, even before independence!

Article 5(2A) states that unless the President, acting in his personal discretion, gives a contrary written direction to the Speaker, a bill seeking to amend certain key provisions in the Constitution requires the approval of at least two-thirds of the votes cast at a national referendum.

The Constitution of Singapore is considered the supreme law of Singapore (read: the mother of all laws). Thus, it’ll be safe to say that the constitution is a sacred document.

With this supermajority, the PAP can generally change the constitution at will, as the PAP party whip will impose party discipline to ensure that proposed changes are passed.

Amendments to Singapore’s Constitution Since Independence

Over the years, there have been more than 50 amendments made to the Constitution since Singapore gained Independence in 1965.

Here are some of the more noteworthy ones over the years:

1970: The Presidental Council (now the Presidential Council for Minority Rights) was established to inspect the bills passed in Parliament and ensure that these bills are not discriminatory to any racial or religious groups.

1984: The Non-constituency Members of Parliament (NCMPs) scheme was implemented.

1988: The GRC scheme was established. This scheme is a type of electoral division or constituency where instead of individual candidates contesting for seats in Parliament, they are voted in as a team instead. Also, there is a requirement that at least one member of the team has to be from a minority group in Singapore.

This resulted in Madam Halimah Yacob being declared President in a walkover at the 2017 Singaporean Presidential election reserved for Malay candidates.

However, contentious amendments like the establishment of the GRC scheme in 1988 and the 2016 Reserved Presidency amendment that were challenged by opposition MPs can be passed without much fanfare.

Speaking of amendments to the Constitution, the NCMP scheme guarantees that there will be would always be a minimum number of opposition members in Parliament even if they were not elected.

Due to the 2016 amendments made to the scheme, the current minimum number of opposition MPs in Parliament (including NCMPs) stands at 12.

Under the scheme, the opposition candidates that win the highest percentage of votes in a General Election will be offered seats in Parliament.

For GE2020, there are will be two NCMPs seats offered to the opposition in parliament.

Based on the results, the two seats will be offered to two candidates in the Progress Singapore Party team that won 48.31% of the votes in the West Coast GRC.

An important thing to note is that the 2016 amendments grant NCMPs the same voting rights as elected MPs.

In other words, NCMPs can now contest and vote on constitutional changes, supply and money Bills, votes of no confidence in the Government and removing a President from office.

Buzzing About What Happened During GE2020?

Jump into the discussion on our SeedlyCommunity to discuss all things GE2020! 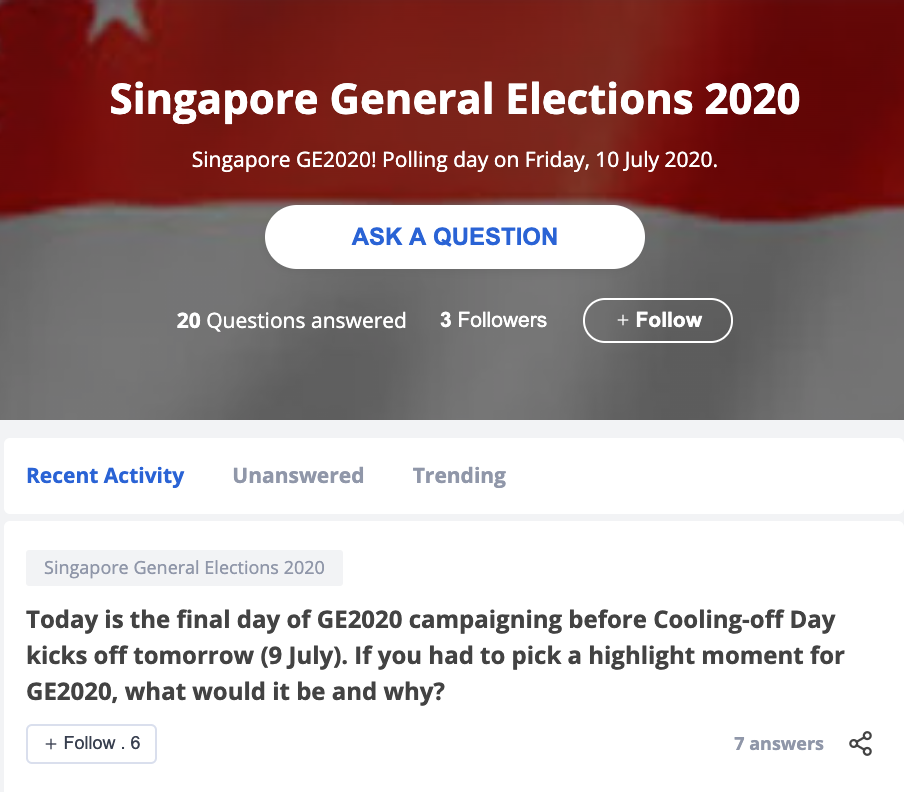