Singapore Savings Bonds Hack: Should You Switch To An SSB With Higher Interest Rate? 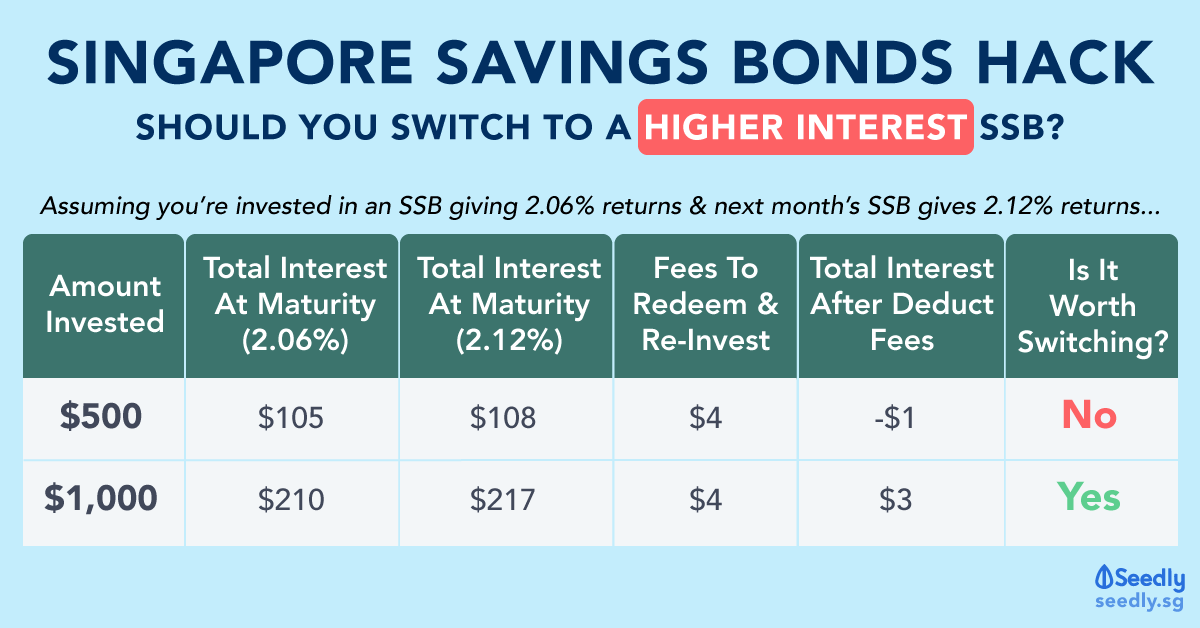 Singapore Savings Bonds Hack: Should You Switch To An SSB With Higher Interest Rate?

Is The Singapore Savings Bond A Good Investment?

We’ve talked about Singapore Savings Bonds at length before and debated about whether they’re a good investment.

In case you’re wondering what are SSBs…

They’re basically bonds issued by the Singapore government as a safe and flexible option for long-term saving of up to 10 years.

But if you’re here, you already know what’re SSBs and are already considering or have them as part of your portfolio.

So what you want are SSB hacks and other ways to see if you can earn even more on top of what the bonds will give you.

For example, a very common question that most people would have is: what if next month’s SSB interest rates are better than the SSB you bought for this month?

Is There Any Advantage For Investing In SSBs?

Some of the most obvious advantages of investing in SSBs include:

And here’re some of the disadvantages:

Also, if we compared the SSB to similar instruments like bank savings accounts or fixed deposits…

Here’re the considerations at a glance:

So What Are The SSB Interest Rates?

As an investor, your potential returns would be your most immediate concern when deciding if a financial instrument is worth your time.

Here’s a look a brief for the average per annum interest you’d earned after 1 year, 5 years, and 10 years:

You’ll notice that the SSB interest rates have been on a decline recently.

But finger crossed, we’re hoping that the SSB interest rates will recover to its former glory.

When that happens, then this SSB hack which we’re going to talk about might come in handy.

A Possible SSB Hack To Up Your SSB Investing Game

What happens if you’ve already committed to an earlier SSB but the next issuance promises better returns?

According to the Seedly Personal Finance Community, there was a suggestion to

The problem here is that there’s a transaction fee of S$2 charged each time you withdraw or invest in SSBs.

If you withdrew and re-invested the amount into SSBs, you will incur a loss of S$4.

So when will this make sense?

Scenario 1: You Withdraw And Invest In Next Month’s SSB

Should you redeem your August issued SSB and re-invest that money in the September issued SSB instead?

As shown in the table above, it’ll only make sense if you invested at least S$1,000.

Note: depending on the amount you invested initially, you might receive a healthy sum of pro-rated interest despite the early withdrawal.

Scenario 2: You Withdraw And Invest In Next Year’s SSB

So should you redeem your May 2016 issued SSB, that you’ve already been holding for a year.

And re-invest that money in the May 2017 issued SSB instead? 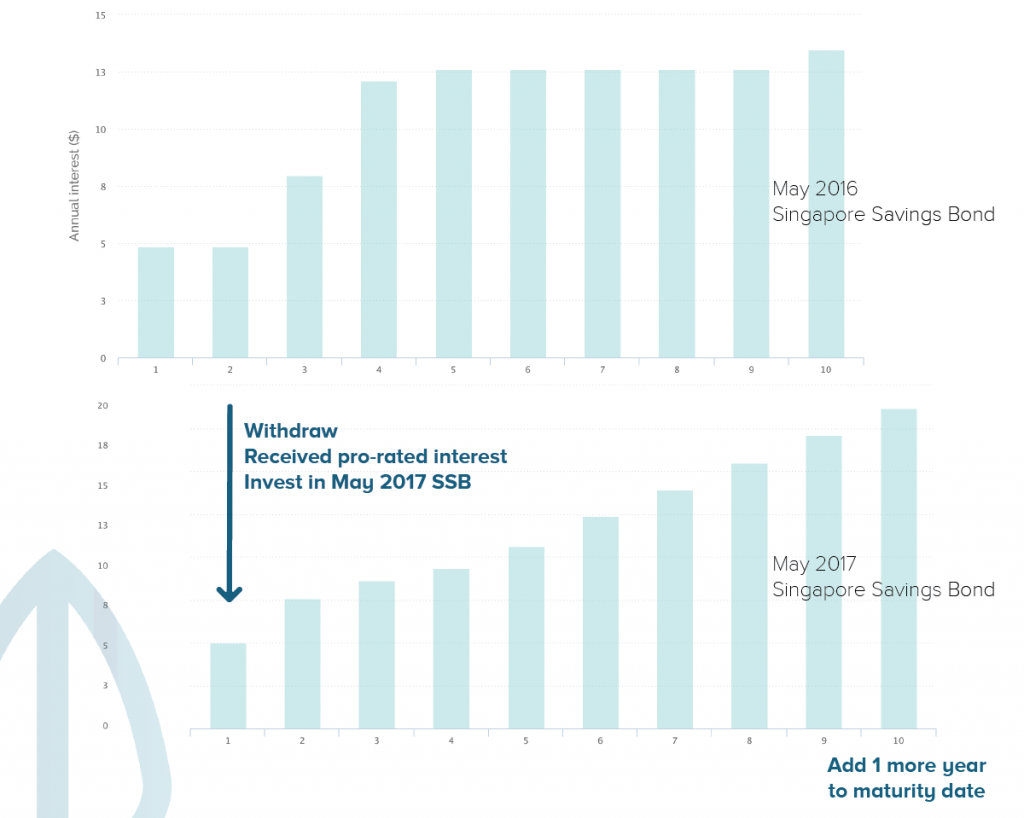 We ran some numbers and here’s what we found:

Even with the minimum investment of S$500, redeeming your May 2016 SSB a year later and re-investing that same amount into the May 2017 issued SSB you will net you an extra S$18 interest.

After deducting the loss of S$4 (remember the S$2 transaction fee?), you still pocket an extra S$14 interest after switching to the May 2017 issued SSB.

However, this really depends on a case-by-case basis so you’ll need to do a little math to figure out if it’s worth redeeming early and re-investing into another SSB issued at a later date.

So… How Do I Redeem A Singapore Savings Bond?

When your SSB fully matures – 10 years from its issuance date – your initial principal and accrued interest will be credited to your bank account (DBS/POSB, OCBC, or UOB), which you used to purchase the SSB via Direct Crediting Service (DCS).

If you used your SRS funds to purchase the SSB, the payout will be credited to your SRS account instead.

But if you choose to redeem your SSB early, then you’ll have to submit your redemption request through your bank’s ATM or internet banking service instead.

Similarly for SSBs purchased with SRS, you can submit your redemption request through your bank’s internet banking service.

And as mentioned earlier, a S$2 transaction fee will apply for each redemption request.

Can I Make A Partial Redemption Instead?

The minimum redemption amount is S$500.

So you can redeem in multiples of S$500 or up to the amount you invested.

You will receive the amount you requested in full, along with any accrued interest.

Are There Other Alternatives To SSB?

Since we’re looking at a 10-year investment horizon…

Here are some other alternatives which you can consider depending on whether you want liquidity or higher interest:

As you can tell, it’s usually a case of having to choose one over the other.