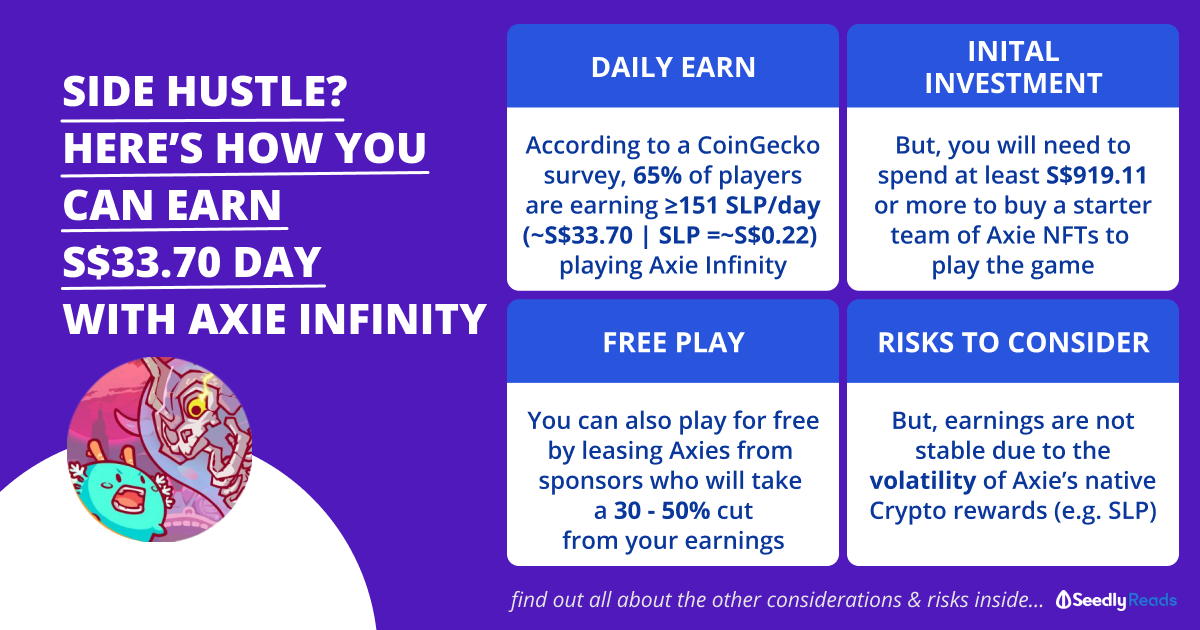 Axie Infinity: Here’s How You Can Earn S$33.70 Worth of Axie Crypto a Day as a Side Hustle!

Growing up as a child in Singapore, I have fond memories of playing Maplestory with my friends after class after school.

I would spend endless hours playing the game and grinding away to level up and get better equipment.

As I was spending a bit too much time on the game, my dad would limit my playtime and ask me to focus on my studies as I could not earn money from it.

That’s very sound advice in hindsight. But, the immature 15-year version of myself would argue with my Dad by stating that there were people selling their accounts for thousands of dollars.

But my dad would just laugh and get me to hit the books.

Fast forward to today, we are seeing an exciting new development in the cryptocurrency space.

Turns out, you can actually earn cryptocurrency from playing games designed to do just that. What a world we are living in right now.

Axie Infinity is one such ‘play to earn game’ that has been hoggin the headlines recently.

Here is all you need to know about it!

What is Axie Infinity?

Axie Infinity is a Pokémon-inspired blockchain game made by Vietnamese developer Sky Mavis.

The game which was launched back in 2019 can be played on Android iOS, Windows and Mac.

But currently, you cannot play the iOS version as the beta test for it is full.

More specifically, the game is built on Ronin, an Ethereum based sidechain specially built and customised for Axie Infinity.

Sky Mavis claims that the game currently has about 1 million daily active players with about 40.5% of them based in the Philippines and the next biggest markets being Venezuela and the U.S.

In the past two months, the amount of players playing Axie Infinity has just skyrocketed.

But according to crypto analytics company Cryptoslam, there are only about 914,000 cryptocurrency wallets that hold Axie non-fungible tokens (NFTs)

The game is centred around Axies: furry creatures that players can breed, raise and collect to use in battle, complete challenges or even build a land-based kingdom for.

Underneath the hood, Axies are actually non-fungible-tokens (NFTs) or ERC-721 tokens. This means that each Axie is a totally unique/non-fungible digital asset.

The game is actually a whole ecosystem with features like:

According to Axie, players can earn by:

On top of the huge player base, Axie Infinity’s revenue has skyrocketed.

According to data from cryptocurrency data provider Token Terminal, the Axie Infinity protocol is the second highest-grossing decentralized applications (apps)/blockchain platform since launch. What’s remarkable is that the protocol has cumulatively generated two times more revenue than Ethereum.

This can be attributed to Axie moving to the Ronin sidechain which currently charges $0 in gas fees.

Axie earns its revenue from in-game purchases like virtual land, fees charged from breeding and more. In addition, Axie takes a 4.25% cut from all Axie NFT transactions.

More importantly, about, 95% of this revenue goes back to the players of the game.

How Much Can You Earn From Axie Infinity?

To start playing Axie Infinity, you will need a cryptocurrency wallet like Metamask with some Ether (ETH) and a Ronin wallet to deposit ETH via Sky Mavis’ Ronin bridge.

You will also have to buy a minimum of three Axies from the Axie Infinity Marketplace to form a starter team.

Do note that this floor price is volatile as it is dependent on the demand for Axies and the price of ETH.

Depending on these factors, new players will need to pump in more initial capital to play. This team is also not the best so you might have to invest more than this to start.

But, if you don’t want to buy any Axies, you can actually lease them from managers for a cut of their earnings.

But before you get too excited.

A couple of caveats.

This game is not the easiest to play as you have to commit a ton of time to learn the intricacies of the game, the Axie marketplace, breeding system and more.

Here’s a comprehensive guide by LevelDash you might want to check out.

If you are undeterred, here is an estimation of how much you can earn from Axie Infinity according to an Axie Infinity CoinGecko survey conducted on Twitter from 17 – 19 July 2021.

This means that 65% of players reported earning 151 or more SLP a day playing Axie Infinity.

In addition, CoinGecko added that the average player could earn up to 185 SLP a day with four hours of playing time.

The survey also found that the majority (80%) of Axie players play the game every day and spend less than two hours a day playing the game.

Thus, it would be safe to say that on average, you can earn about S$33.70 a day playing Axie infinity for two to four hours a day.

But a caveat, judging from the many guides I’ve read, you will initially need to start playing a few hours a day with playing time decreasing drastically the stronger your Axies get.

There are four main ways you can start earning cryptocurrency from Axie Infinity.

First, you can do everything by yourself and farm SLP to sell them on cryptocurrency exchanges like Binance.com and Crypto.com

Also, here are the transfer fees you have to take note of as well:

To recover your initial investment, you will need to farm SLP daily for one month.

But if you are bored of the game, you can always sell your Axies on Sky Mavis’ Axie NFT marketplace. But, this is also dependent on the desirability of the Axies.

Alternatively, you can play for free without having to buy Axies by looking for a sponsor via Axie’s scholarship programme.

Basically, you look for someone who is willing to lease out the Axies for you to farm SLPs.

In return, you split the earnings with your Axie scholarship sponsor.

Typically, the terms of the agreement are that the scholars will get a 50% – 70% cut of the SLP earnings.

Here is a guide to how this works.

There is one other way.

If you find that you are pressed for time, you can instead buy some Axies and sponsor scholars to play and farm SLPs for you.

You will also have to hand over anywhere between 30% – 50% of your SLP earnings to your scholar.

Our Seedly student ambassador Yun Heng has written a guide based on his experiences launching an Axie Infinity scholarship programme.

Last but not least, you can choose to breed Axies and sell them.

But this is for the really advanced players and requires quite a sum of initial investment and a decent knowledge of the game to do well.

However, there are a few risk factors to consider.

Axie’s explosive growth has caused some challenges for Sky Mavis as the developers have to contend with the burden of increasing user demand, with the game not functioning well in the past few weeks.

In terms of the day to day operations, Sky Mavis has recently encountered distributed denial of service (DDOS) attacks, as well as some server hosting problems. Hacks are also a concern as there is little to no consumer protection if something happens.

Not to mention that this ‘Play-to-Earn’ business model is rather new which puts into question the future sustainability of player earnings.

The earnings are still heavily affected by the volatility of SLP: the main cryptocurrency that is dished out as a reward for playing Axie Infinity.

In addition, you will have to consider the volatility of ETH as well as it will affect the initial investment amount you need to invest.

This means that this income source is not stable which is something you need to consider if you are looking to invest in playing Axie Infinity.

Not to mention that in the future, we might see other blockchain-based games arising to replace Axie.

But on balance, Axie had time to build a moat for its product with its strong efforts in building a community that started all the way in 2017. This will not be easy to replicate.

Can’t Get Enough of Cryptocurrencies?

We have partnered with SingSaver and American Express to launch this super exclusive Bitcoin campaign for the first time ever in Singapore.

These rewards will be given out from now until 7 November 2021 OR until S$1 million worth of Bitcoin has been claimed, whichever is earlier. 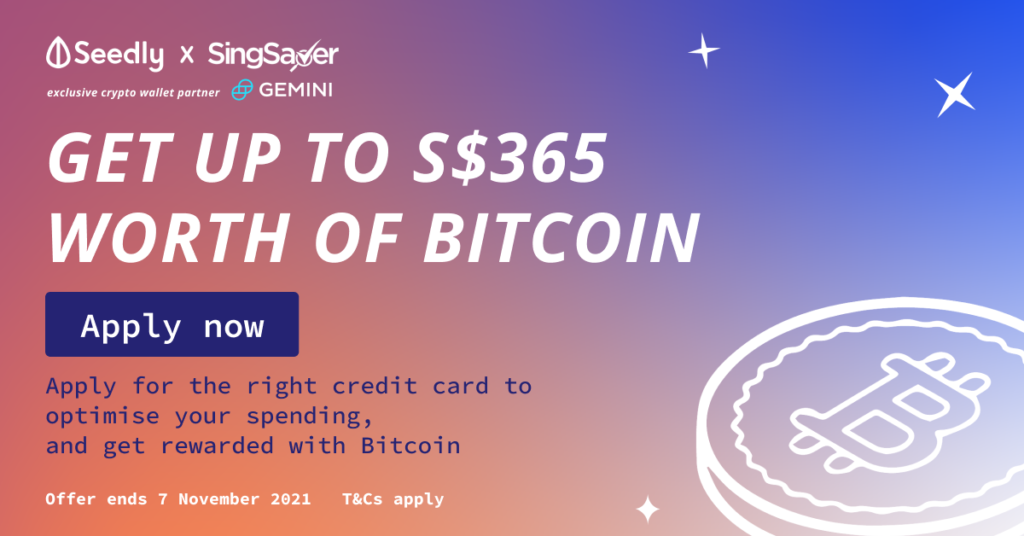