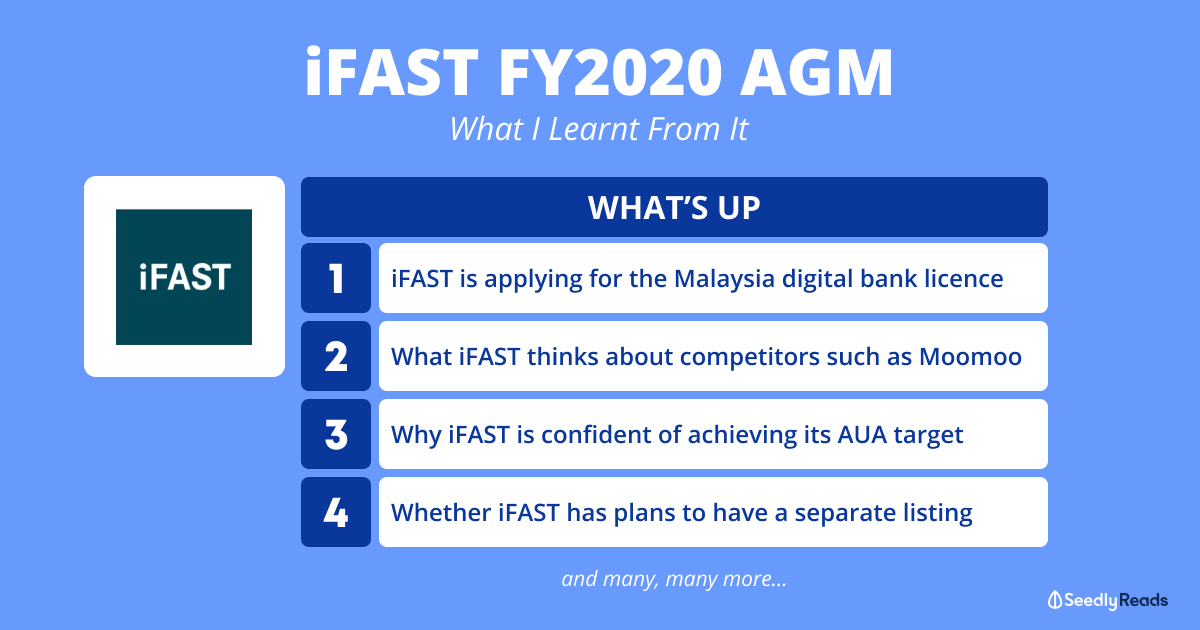 I love attending AGMs as it allows me to meet management face-to-face and understand more about the business. It also allows networking with like-minded investors.

Here are some of my main takeaways from the AGM.

The AGM commenced with a business update from iFAST’s first quarter of FY2021 (1Q2021).

Here are the key numbers:

The AGM proper began after the 1Q2021 business update.

Shareholders who were present physically could ask questions directly while those attending virtually could ask them via video conferencing or in text form.

Here are some of the more interesting questions and answers from the AGM.

The company feels it has to ensure growth in the market to a much bigger size. It is still small in China compared to the potential in the country.

In the last year, iFAST has seen some momentum and it is encouraging that the strategy it has put in place in China is slowly bearing fruits.

However, the overall scale is still not large and the company with continue to invest in the country.

It is possible for the China losses to be more in the current financial year than last year. Even though there would be losses, the losses relative to the overall profitability is still manageable.

There’s no guidance for a specific number for 2021, especially since it’s still finalising the contractual details for its participation in Hong Kong’s eMPF platform project.

As far as its ordinary business is concerned, one rough way to look at it is that capital expenditure will be at similar levels to the last one to two years.

For the exact levels, perhaps in the next one to two quarters of 2021, there will be better visibility.

On the Malaysia digital banking licence

iFAST is currently in the midst of firming up details with a potential partner for the digital banking licence in Malaysia. In February this year, iFAST first revealed that it was working on the licence application.

iFAST will be taking the lead in the application. But since the licence in Malaysia gives preference to applicants that are majority-owned by Malaysian shareholders, iFAST’s stake should be below 50%.

In the first three years, the minimum capital that is required is RM 100 million. The amount is manageable for iFAST even with a doubling of capital to RM 200 million with a 50% shareholding.

News outlets have reported that the Malaysian central bank, Bank Negara Malaysia, may issue up to five licenses for digital banks in the country.

On emerging competitors such as Tiger Brokers and Moomoo

The company is looking at strengthening its stockbroking business, but not necessarily the pricing aspect alone as that’s not sustainable over the long run.

So its focus is on broadening the overall services (eg. the ideas and tools that it provides).

iFAST is always taking a long-term approach and on the business-to-business (B2B) side, it’s empowering other financial institutions with the fintech solutions that it has. For instance, one of iFAST’s fintech solutions client is, in fact, Tiger Brokers.

iFAST has been in business over the past 20 years and it has seen many competitors launching new services offering lower prices. The company aims to offer the best overall service and value for money.

On iFAST’s associates and potential synergies

Providend, one of its associates, is one of the few companies that focuses on the fee-only advisory model and is a model that iFAST believes in.

As for Raffles Family Office (a joint venture in China), it has strengths in the high net worth individual (HNWI) market.

iFAST has a presence in five markets but it still sees potential to grow in all markets.

The company has a target of reaching S$100 billion in AUA by the end of 2028. iFAST is committed to the goal in line with its mission, which is “to help investors around the world invest globally and profitably”.

In Singapore, iFAST has an AUA of S$11 billion, but its market share is still small relative to the wealth management industry here. Growing this to S$20 billion or $30 billion or more by 2028 is achievable if its execution is good.

Looking at the individual markets in Hong Kong, China and Malaysia, the potential to achieving the target is there.

Even at S$100 billion, it is still tiny compared to the worldwide wealth management sector.

For instance, investment services firm Charles Schwab (NYSE: SCHW) has an AUA in the trillions of dollars and the bulk comes from the US market.

Therefore, the target of S$100 billion for the Asian markets that iFAST is in is not exactly a massive amount.

On plans for a separate listing in the US

iFAST has no plans to have a separate listing in the US or other markets currently.

But if it does in the future, it will inform shareholders accordingly.

On operational leverage and scale

It took five years for the Singapore operations to be profitable and then improved even further thereafter.

Other markets are still behind Singapore in terms of scale.

On opportunities to take part in the Singapore digital banking licence

On an immediate basis, iFAST is not able to participate in the digital banking space here.

However, there are still other ways to progress in the fintech sector even without having a licence. There are other services that iFAST is in the stage of working on.

If the chance arises again to apply for a digital banking licence in Singapore, iFAST will re-consider.

What Are Your Thoughts iFAST?

Come and discuss your thoughts on iFAST Corporation Ltd (SGX: AIY) in our community at Seedly!

Disclaimer: The information provided by Seedly serves as an educational piece and is not intended to be personalised investment advice. ​Readers should always do their own due diligence and consider their financial goals before investing in any stock. The writer owns shares in iFAST.