Ways to Build Your Wealth: Types of Income Streams Anyone Can Have
435
shares 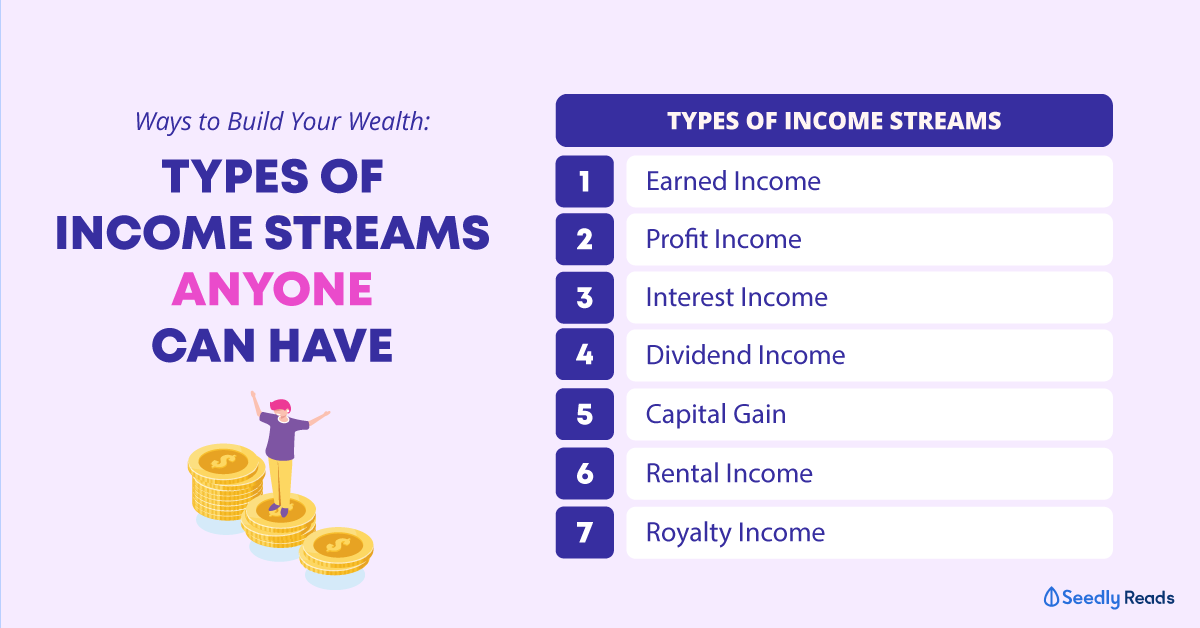 The COVID-19 pandemic has sent the world into a frenzy, with the grim recession cloud looming over our heads.

This situation is sending us a sobering reminder that having multiple sources of income is no longer a luxury, but a necessity instead.

Apart from having different money sources to cushion the blows of a recession, alternative income sources create opportunities – it may help in supplementing your 9-5 job, provide you with an alternative to exit the rat race, or it simply fulfills the golden word of wealth building:

There are two types of income – active and passive.

Active income is the money that is earned directly from the work that is put in.
This is commonly known as ‘exchanging time for money’.

Passive income is the money that is earned with the person not having to be actively involved in, from assets that have been built previously.

The idea of passive income has been gaining traction in recent years, due to the thought of not having to be present to be earning money, and during hours when one’s asleep.

However, do keep in mind that passive income usually comes with a huge upfront investment cost in terms of time and money.

That being said, passive income is definitely worth exploring, especially for those who long for early retirement and the freedom of time.

A study was done by the author of ‘Rich Habits, Poor Habits‘, on 233 millionaires and their income streams.

The results were as follows:

Want to be a millionaire? Time to have more than one source of income.

Here are some types of income streams for you to consider.

TL;DR: Types of Income Streams To Have

This is the most common income type that most of us know of, which is earning income from working our day jobs.

This is most people’s primary source of income, where we exchange the bulk of our time for this form of money.

This is a form of active income.

Even though the focus has been largely on passive income, this is one of the most important sources of income to focus on, especially when you are starting from scratch.

This is because your earned income would form the building blocks of your capital, before they can be deployed to generate some passive income.

Profit income is the money that is derived from the buying and selling of products and services.

Instead of working for money, money is generated from exchanging products for money.

With more digital products sprouting up on the internet these days, profit income has become an option for all of us to explore, where skills and expertise can now be easily traded with money.

Also, when the product is high in value, more money can be charged for it, allowing more income for individuals.

(Note: There are a lot of cringe-worthy videos jamming our Youtube ads teaching us how to do ‘e-commerce’ with their broken English. Please do your due diligence and not spend unnecessary money before earning some.)

High-yield savings accounts have been all the rage these days.

I am personally a sucker for checking out the savings accounts offering the best interest rates, and going through the hassle of transferring my money around.

So why are we being paid interest rates?

When we place money in the bank, we are essentially lending the bank money.

The bank will then lend the money to borrowers, where it receives interest for the loan, and interest will also be paid to the deposit account holders (us!).

This is termed as interest income.

The same is also for bonds like Singapore Savings Bond (SSB), where the money is lent to the issuer for a fixed period of time, and interest income is earned in a form of coupon payment.

One of the most cliche sentences in the investing world would be:

The focus on investing early has never been greater these days, with articles everywhere screaming “START. INVESTING. NOW!”.

This is probably the favourite type of income stream for investment advocates, and the ability to live off of dividends is also probably the ultimate goal for many.

Dividend income refers to cash payments that are received for owning shares of stock in a company.

They are typically paid quarterly, thereby providing a steady flow of income for those with a relatively large investment portfolio.

Even though the idea of solely depending on dividend income is definitely appealing, it is important to be mindful of asset allocation, taking into account the risk levels one which would be present for different types of investment products.

In order for one’s nest egg to be sustainable and last a lifetime, it is crucial to remain prudent and maintain diversified sources of retirement income.

Capital gain refers to money earned from a rise in the value of an asset, giving it a higher value than its purchase price.

This could be in the form of investments, or real estate.

The boomer generation had the golden years of watching property prices soar, and witnessed great heights of capital gain.

Though not as prominent now, current homes are still being sold at attractive rates, allowing homeowners to pocket these gains.

For investments, this income stream could be highly advantageous for people with a long time horizon, as markets are unpredictable in the short term, but are usually upward-trending in the long run.

In addition, we are fortunate to not be taxed on capital gains in Singapore, which makes this income stream even more attractive.

As straightforward as it sounds, rental income is income that is derived from renting spaces you own.

This could be in the form of renting an apartment or renting commercial real estate spaces.

Though uncommon, renting out a room of your HDB flat might be able to fetch you $800.

Rental income could be useful as an extra source of income, and doesn’t need any extra ‘skills’, unlike other income streams.

For HDB flats, do check in with HDB on your eligibility to rent, and also seek HDB’s approval before the commencement of the tenancy.

Royalty income is a type of income that is earned from others using your idea.

When you create a product, idea, or process and others use it, a small fee can be charged and paid to you.

Nope, you don’t have to produce money like Taylor Swift to earn money. (Though stars get like, damn lots of money from royalties. Katy Perry can get USD$388,000 – $543,000 from Spotify streams alone.)

Original ideas and creations are considered intellectual property, and it is illegal to use it without the owner’s consent. To obtain consent, people would have to pay the owner for it.

Creations could come in the form of books, artwork, designs or even operating systems.

The great thing about this type of income is that income can be continuously generated once the product is completed, where work has to be done only once for money to be paid over a long period of time.

Types of Income Streams Anyone Can Have

There you have it – some income streams for you to get started with.

It is now possible to have more than one income stream, with many people being successful at it, and inching towards their millionaire dreams.

Are there any other sources of income we should explore?

Let us know in the comments below!