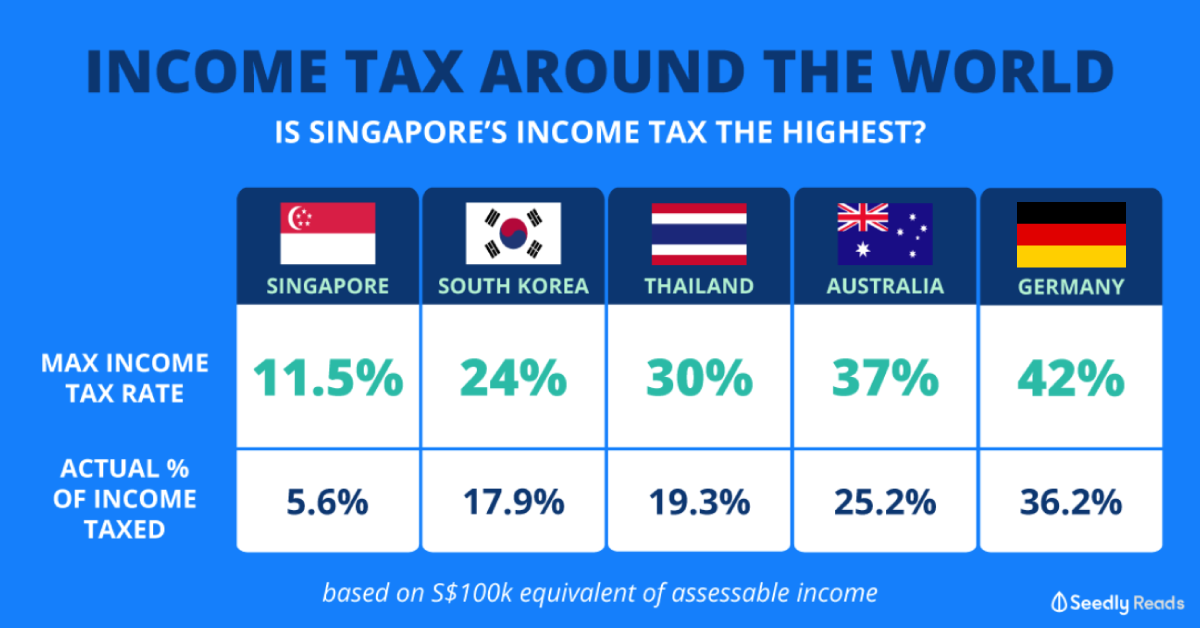 A common grouse that many of us Singaporeans have is this:

“Everything also go up only my pay remains the same!”

Having to pay income tax on top of a miserable paycheque. 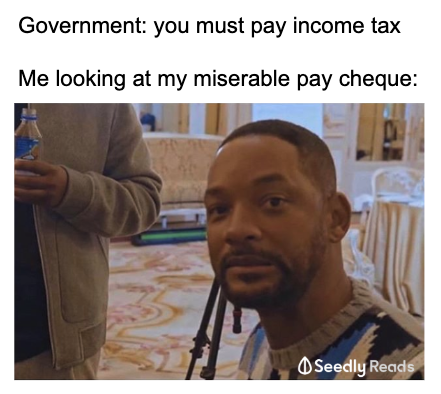 So… do you think that you’re paying too much income tax?

Thinking of moving out of Singapore for greener pastures with lower income tax rates?

Living and working overseas might sound really attractive, but some things are just better at home.

Before you decide which country you’d like to move to, here’s a look at the different income tax rates around the world!

TL;DR: Which Country Has The Lowest Income Tax?

Here’s an income tax comparison for some countries around the world.

For ease of comparison, we’ll be looking at the yearly assessable income equivalent of S$100,000.

Note: all currency conversions are estimations and rounded up to the closest hundred.

You might be surprised to learn that as Singaporeans, we do in fact pay one of the lowest income tax in the world.

Income Tax Comparison Around The World

If you haven’t started paying income tax yet, you probably think that it works like a flat tax system with a constant marginal income tax rate applied to everyone.

Thankfully, that’s not the case as most countries have a progressive tax system.

With this system, individuals with lower income pay a lower percentage of their income as tax.

While higher-income groups will have to contend with a higher income tax rate as their income climbs.

For this comparison, I’ll be looking at a yearly assessable income equivalent of S$100,000.

Note: all of the countries selected in this comparison work on a progressive tax system. Some of these countries might also levy a provincial income tax or other compulsory payments on top of their personal income tax, however, these are not included in our calculation.

Out of all the Asian countries listed in the table, Singapore has the lowest income tax (11.5%) for a yearly assessable income of S$100,000.

While Thailand has the highest income tax (30%) for the equivalent yearly assessable income!

Wondering where all that Thai tax goes?

Part of it goes to the Social Security Scheme in Thailand, whose main objective is to guarantee benefits for insured persons and to relief difficulties.

Such benefits and reliefs cover:

Similar to the Thais, part of this tax money goes towards the Bantuan Rakyat 1 Malaysia (BR1M) aka “People’s Aid for 1 Malaysia”.

This programme is part of the government’s effort to ease the burden of lower-income groups in Malaysia.

As of 2018, the programme has been renamed Bantuan Sara Hidup Rakyat (BSHR)

Down undah in Australia, you’d have to fork out a hefty 37%.

Some of these taxes will fund social welfare payments administered by Centrelink, a branch of the Department of Human Services, as part of the country’s social security.

But New Zealand isn’t too far off either at 33%.

Although not as high as Australia or New Zealand, Canadian and American citizens have to pay 26% and 22% income tax respectively.

If you’re wondering where do the Canadian tax dollars go, some of it funds the facilities and services that their residents enjoy — such as libraries, parks, playgrounds, and swimming pools.

Some of it also goes to social programmes such as Old Age Security program payments (determined by how long you’ve lived in Canada after the age of 18) and the Canada Child Tax Benefit.

Out of the three European countries listed, the Germans pay the steepest amount of tax (42%).

That’s almost half an individual’s income!

German income tax contributes to many things, from education to healthcare.

The fact that Germans pay so much is probably why they have one of the most comprehensive healthcare systems in the world.

It’s also worth noting that the tax also pays for universal healthcare, which ensures everyone living in Germany has access to basic health insurance.

Still Think That Your Income Tax is Damn High?

While there are indeed other considerations such as population and geographical size of the country.

Based on my sampling of countries…

It seems like Singapore does, in fact, have one of the lowest income tax rates in the world — for a first-world nation anyway.

You might be wondering, “So what does the government do with our tax?”

Like most of the countries listed, the Singapore government spends most of our tax dollars in areas like education, healthcare, and infrastructure.

So in some way or another, we would still somehow benefit from our tax contributions.

Let’s not complain too much lah, ah?

About Leo Goh
Just a simple girl trying to live her best financial life.
You can contribute your thoughts like Leo Goh here.