Leader of the Opposition in Singapore: Additional Parliamentary Privileges & Double the Allowance 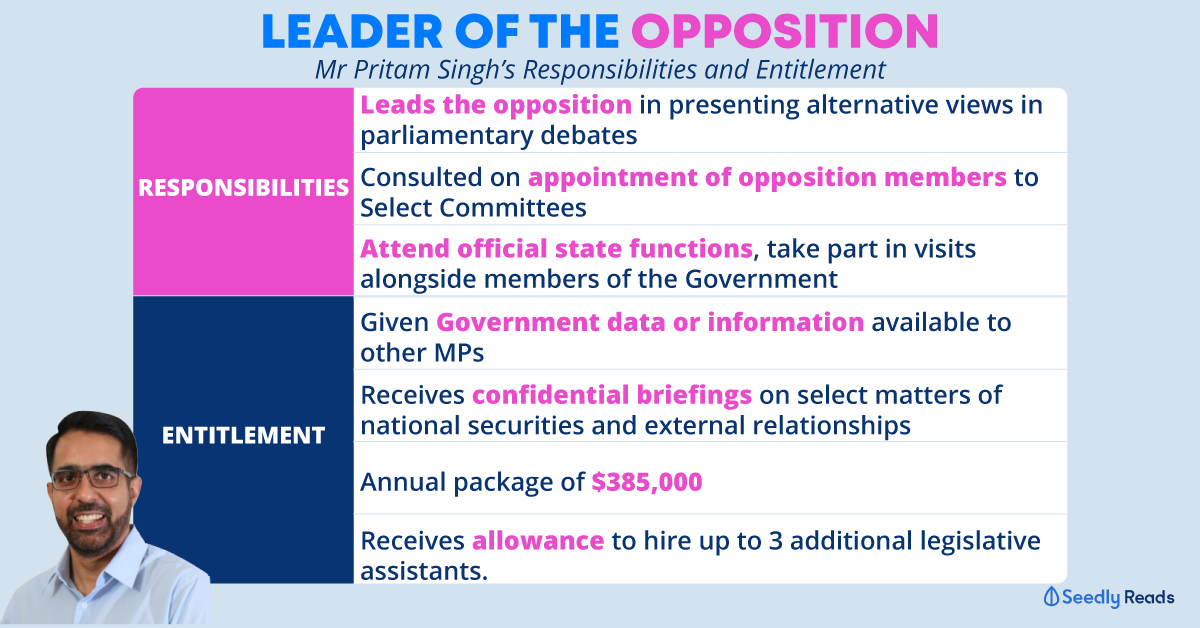 Leader of the Opposition in Singapore: Additional Parliamentary Privileges & Double the Allowance

Pritam Singh Appointed as Leader of the Opposition

In case you missed the entire General Election.

One of the more noteworthy moments was when Workers’ Party (WP) secretary-general Pritam Singh was formally appointed as the Leader of the Opposition (LO).

This is the first time in Singapore’s history that the title of ‘Leader of the Opposition’ is being recognised officially.

Prior to the 2020 General Election, the title is an unofficial one and was held by Low Thia Khiang, Chiam See Tong, Ling How Doong, Joshua Benjamin Jeyaretnam and at some point, Lee Kuan Yew in the Legislative Assembly between 1955 and 1959.

Prime Minister Lee Hsien Loong has announced that the Leader of the Opposition will be given the staff support and resources to carry out his role.

But we wonder, “What on earth does this all mean?”

Does it mean more sai kang (Hokkien: menial tasks) or is there more to it?

TL;DR: What Exactly Does the Leader of the Opposition Do?

After considering parliamentary systems which have such a position, such as Australia and the United Kingdom.

The Parliamentary office has defined the duties and privileges of the Leader of the Opposition in Singapore as such.

The LO will also have Additional Duties, where he will:

To carry out his duties, he will:

In addition, the Parliamentary office added that the role of the LO will evolve as Singapore’s political system develops.

So we can expect Mr Pritam Singh to take on more responsibilities in the future.

All of this will be formally set out in Parliament when the Leader of the House makes a statement during the 14th Parliament’s first sitting on 24 August 2020.

The Leader of The Opposition

Before the Parliamentary house officially announced what the duties and privileges of Singapore’s Leader of the Opposition are.

We looked towards the United Kingdom’s Westminster system — since the Parliament of the Republic of Singapore is largely based on it. 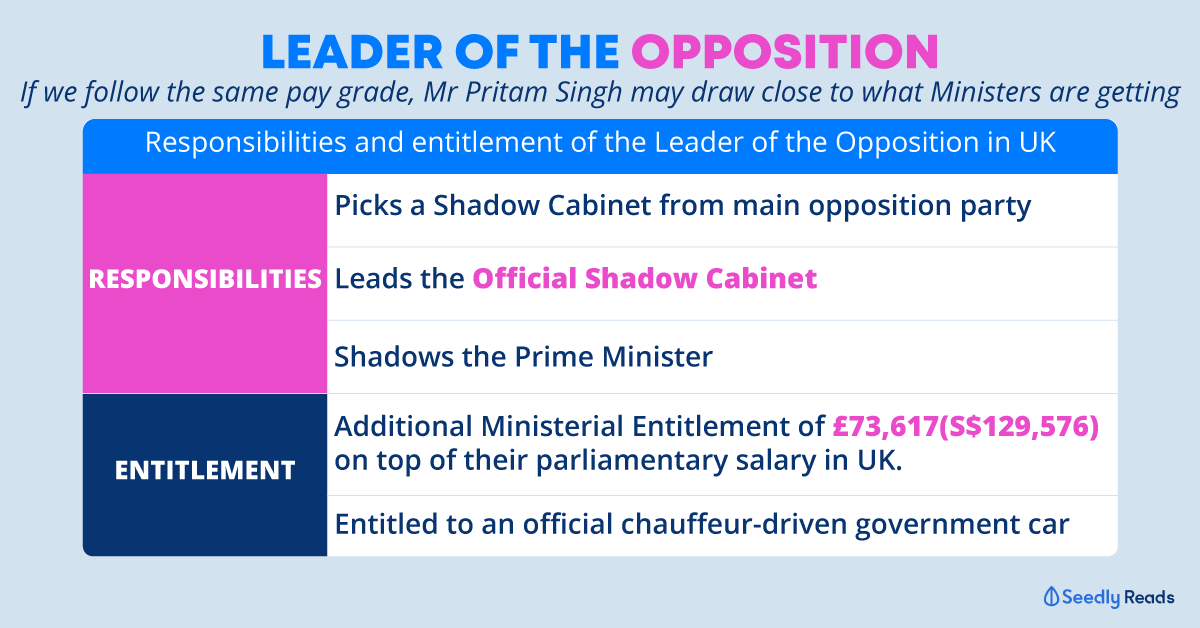 And found this possible list of responsibilities and entitlements of the Leader of the Opposition:

If we followed the same pay structure, Mr Pritam Singh could be drawing close to what a Minister (MR4) is getting.

That’s an annual salary of close to $1.1 million.

But after the Parliamentary house’s announcement, we now know that he will NOT be getting that kind of money.

It’s still twice the allowance of an elected MP though…

(So, I guess we can expect his responsibilities in Parliament to be at least twice as heavy.)

But hey, that isn’t really why these individuals would be getting into politics, now, isn’t it?

What’s more important are the responsibilities that have been drawn up for his role.

How Will The Responsibilities of The Leader of The Opposition Evolve?

In creating this role of the LO, it’s heartening to note that PM Lee and the Parliament are acknowledging the desire of Singaporeans to have a greater diversity of views in politics.

And since Singapore’s legislature have never had a formally designated leader of the opposition.

It’s a good thing that the Parliamentary house has also acknowledged that the role of the LO will evolve over time.

In our humblest of opinion, here is one possible responsibility which Mr Pritam Singh might eventually take up.

Side note: we predicted earlier that a more possible scenario would be the LO being privy to government data and information, and it seems like we were spot on!

In order for the Opposition party to fully shadow the Cabinet, we could use an Opposition Shadow Cabinet that can match the number of ministers led by the Prime Minister.

To put this into sports terminology, if the opposition adopts a “man-marking approach”, with one Workers’ Party elected MP attached to each Minister.

There are 19 Ministers in the Cabinet and only 10 Workers’ Party MP.

Hence, a proper Opposition Shadow Cabinet will not be possible.

Unless they have one Workers’ Party MP shadowing more than one Minister.

Which is quite impossible given the complexity of each ministry.

In soccer, we call this zonal defence.

But perhaps, given time, when more opposition members are elected as MPs.

This will eventually become a reality.