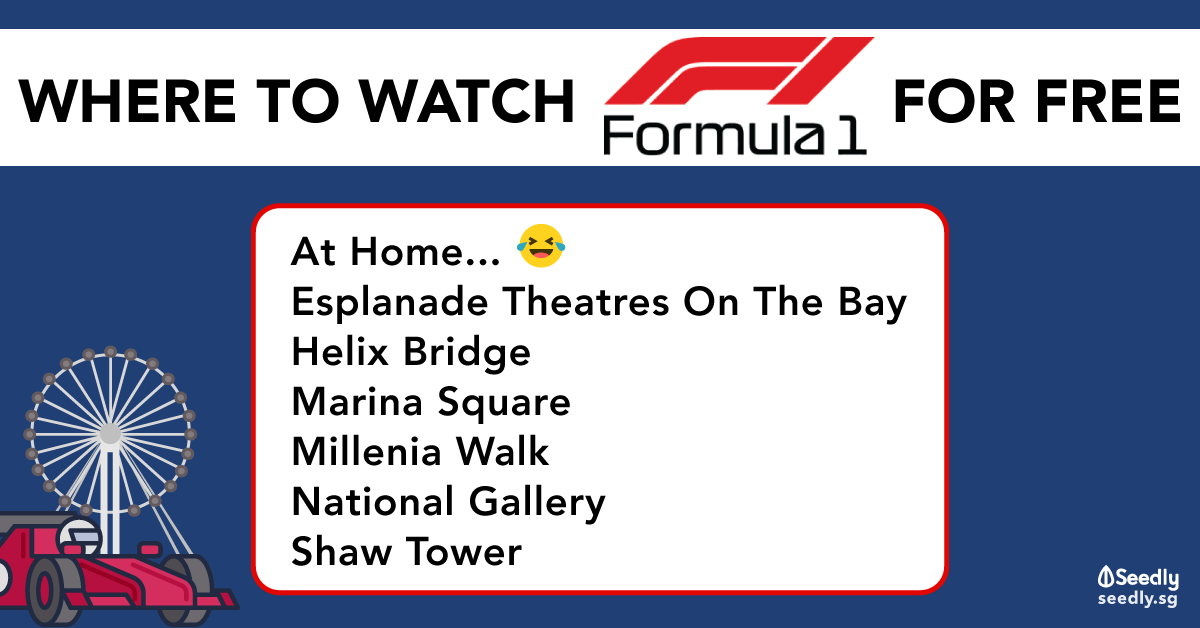 Not everybody cares about the Formula 1 Singapore Airlines Singapore Grand Prix that’s happening on the Marina Bay Street Circuit over the weekend.

But if you do, this list will tell you where to find the best vantage points to catch the race.

Best of all, they’re all free!

And if you do not care for the race, then this list will tell you where NOT to go to because you can be sure that these places will be crowded AF.

In case you didn’t know, you can catch the live broadcast of Formula One Singapore Grand Prix races from the comfort of your home.

All you have to do is tune in to Channel 5, a free-to-air channel, on your TV:

The best thing about catching the race at home is that you won’t have to contend with the crowds. Plus you’ll have easy access to the restroom and if your kitchen is stocked, you won’t go hungry.

Alternatively, you can catch it on Toggle online.

2. Esplanade Theatres On The Bay

The Esplanade Roof Terrace is probably one of the best spots to catch the F1 for free. Especially because you can watch the racers zoom down Esplanade Drive before making a sharp turn at Turn 14 for Raffles Avenue.

But… you can bet that EVERYONE knows this too.

You could “bring a picnic mat and chope your place early”, but you’re better off finding a spot which overlooks Esplanade Drive and just sticking close to the ledge of the terrace to watch the racers do their thing.

While most of the bridge is cordoned off by race officials – as it’s one of the entries to the race grounds.

The Helix Bridge is one of the best spots to sneak a peek at the race due to its proximity to the finish line at the Bay Grandstand Area (Turn 18 to 21).

Need a place for an affordable dinner, preferably with a view of the F1 circuit?

Cookhouse by Koufu, on level 4 of Marina Square, is your best bet.

If you can’t find a seat by the windows facing the Esplanade, you can also head to the Roof Garden on the third floor for a view of the racers as they speed down Raffles Avenue (Turn 15 to 16) and gun for the finish line.

Word of advice: this place is damn popular with families (read: sure siao one).

One of the best viewing points can be found when you take the Millenia Walk exit on the second floor next to Harvey Norman. There you’ll be facing the Ritz-Carlton Millenia along with a clear view of the track, just before Turn 6.

Another option is the link bridge which connects Millenia Walk to Marina Square. That should give you an unobstructed view of Turn 6 as well.

The National Gallery‘s open-air rooftop boasts an expansive view of the Padang, which also makes it a fantastic vantage point for those who would like to watch the racers barrel down Saint Andrew’s Road before Turn 10 aka Singapore Sling.

Yep, I’m as surprised as you are with this entry.

So I got this tip from a friend who found this spot in 2018. Simply head up to the elevated multi-storey carpark (try level 12) of Shaw Tower and you’ll be able to watch the racers push the limit down Raffles Boulevard towards Nicoll Highway (that’s Turn 7 for F1 fans).

Best Places To Watch Singapore Grand Prix For A Fee

If the free vantage points aren’t your jam because you want to atas a bit, then you might want to consider these options instead.

Singapore’s highest alfresco bar gives you a 360° view of Singapore’s expansive skyline as well as the F1 race from more than 60 floors up.

It’s the F1 weekend, so you can expect that the cover charges are slightly higher than usual:

Located on the highest floor of Marina Bay Sands, the rooftop restaurant and bar of CÉ LA VI Singapore provides sweeping views of the Singapore skyline and pretty much most of the F1 circuit along the bay area.

The cover charges during the F1 weekend are as follow:

While the upper floors of Swissotel will give you a spectacular view of the F1 circuit, they’re probably already fully booked for the entirety of the race.

Your next best option is JAAN by Kirk Westaway, which is located on the 70th floor of the hotel.

You could dine here while you enjoy the race but be prepared to cough up $268++ for the dinner menu at this establishment.

LeVeL33 is a restaurant and microbrewery that is located on the 33rd floor of Tower 1 Marina Bay Financial Centre.

Given that it’s just right across the bay from the Esplanade, it goes without saying that the terrace has a pretty good view of the race track.

Here’re the charges to take note of:

The Fullerton Hotel is situated at the mouth of the Singapore River, so the Lighthouse Restaurant & Rooftop Bar provides the best spot to watch racers navigate the sharp turn from Fullerton Road to Esplanade Drive (Turn 13).

HOWEVER, the venue’s booked throughout the entire F1 weekend for a private event.

So unless you can somehow score an invite to that event… consider yourself informed.

Nestled at the rooftop of Andaz Singapore, Mr Stork is a rooftop bar which provides 360° views of the city.

While not commonly known, the bar also provides a glimpse of the F1 circuit. It’s also perfectly situated in Bugis – not so near that you’ll be deafened by the roar of the engines, but close enough that you can hear and feel the pulse of the race.

Here’re what you’d need to fork out:

“Aiya, I just need to pay $33 and I can watch the race from the Singapore Flyer what…”

Only that it’s closed to the general public during the Singapore Grand Prix weekend.

Unless of course, you have a Singapore Grand Prix pass which grants you access to Zone 2. But you’ll still need to purchase tickets to ride in a capsule.

With the accolade of ‘Singapore’s tallest hotel’, it’s unsurprising that another restaurant, SKAI, also promises a stunning view of the Marina Bay Street Circuit from Swissotel.

The price of dinner here will really depend on what you order, but it’s going to be steep.

If you don’t want to splurge on a meal, you can always head to the SKAI Bar instead. However, I understand from friends who have visited the place that the restaurant is the place to be if you want a view of the track (read: not so great views of the F1 circuit from the bar).