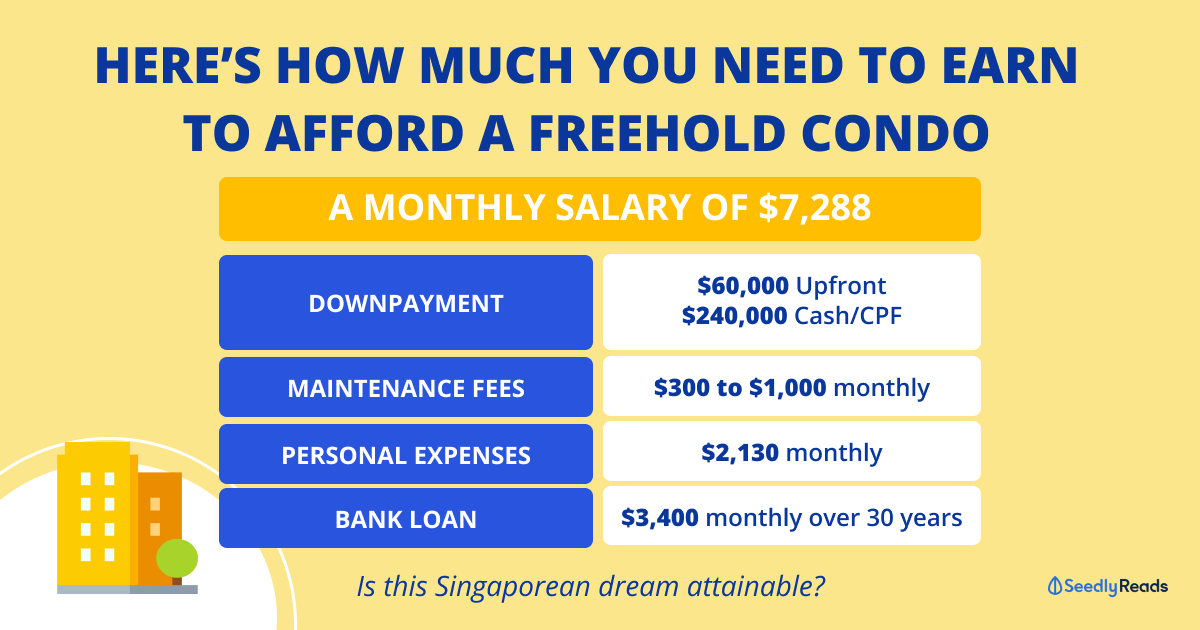 At least, that’s the dream. Or my dream. How attainable is it really, though?

You might know the cheat: get a BTO, and hopefully sell it after five years to the tune of a tidy profit.

If you’re determined to be purchase a freehold condo in Singapore’s (admittedly saturated) property market, this guide might steer you in the right direction.

You may know by now that Singapore’s property market is split into three regions:

Properties that sit within the CCR are particularly pricey, given these cover Districts 1, 2, 6, 9, 10 and 11 – plus Sentosa and the Downtown Core.

How Much Does A Freehold Condo Cost?

Before getting into how much you’ll actually need to be able to afford it, here’s a quick look at freehold condo property prices around Singapore.

How Much Do I Need To Afford One?

Let’s assume you’re an employed 30-year-old with no pending loans.

You also live with your parents, and so have minimal bills, apart from the following:

You’d like to pay off your freehold condo over 30 years – which is the maximum period allowed to enjoy the full 75% Loan-to-value (LTV) limit.

In the following breakdown, I’ve based my numbers off the assumption that you’re looking to get a two-bedroom condo in the CCR district; specifically, Suites at Bukit Timah.

In order to afford this condo, this is what you’ll need:

*Monthly repayment calculated using home loan calculators from OCBC and DBS. I then worked out the average monthly cost based on the provided figures.

This number is also built on the assumption that:

And let’s not forget inflation rates, which the Monetary Authority of Singapore (MAS) tracks by way of the Consumer Price Index, or CPI.

CPI factors in everything from education and housing to healthcare, so it’s safe to say your monthly expenditure will inevitably go up.

Other Factors To Consider

Do You Meet The Total Debt Servicing Ratio (TDSR)?

It’s highly likely your application for a freehold condo would be rejected.

Alternatively, you could be asked to place a higher downpayment on your freehold condo.

Unless you’re some kinda Lee Ka-shing, paying off your freehold condo will mean taking a bank loan — which you’ll only get if you’ve a good credit score.

On that, though, bank home loans can only cover 75% of the cost of your property.

That means you’d need to be able to comfortably cover the remaining 25%, further split into the following ratios:

Then come bank interest rates, which are really enough to put me off even considering a freehold property.

At present, interest rates for bank loans are around 2% to 2.5% annually.

Rates typically go up significantly after the fourth year, though, so be sure to give yourself leeway in case of revised interest rates from your bank.

If you’ve other property loans outstanding, then tough luck – because your bank will only loan you 50% of the cost of your freehold condo.

TL;DR: You’ll need a good credit score to get a bank loan.

Is Getting A Freehold Condo Really The Best Idea?

While the term ‘freehold’ means ‘estate in perpetuity’ in the most Platonic sense, it really doesn’t mean forever.

At least, not in Singapore.

It’s really dependent on the URA’s masterplans. If plans for an MRT line coincide with your property location, you’ll be reimbursed, at best.

These other factors may put your freehold property at risk, too:

When it comes down to it, owning a freehold condo sounds pretty darn cool on paper – and grants you bragging rights, to boot.

But if status is all you’re chasing, then you might want to reconsider investing in one.