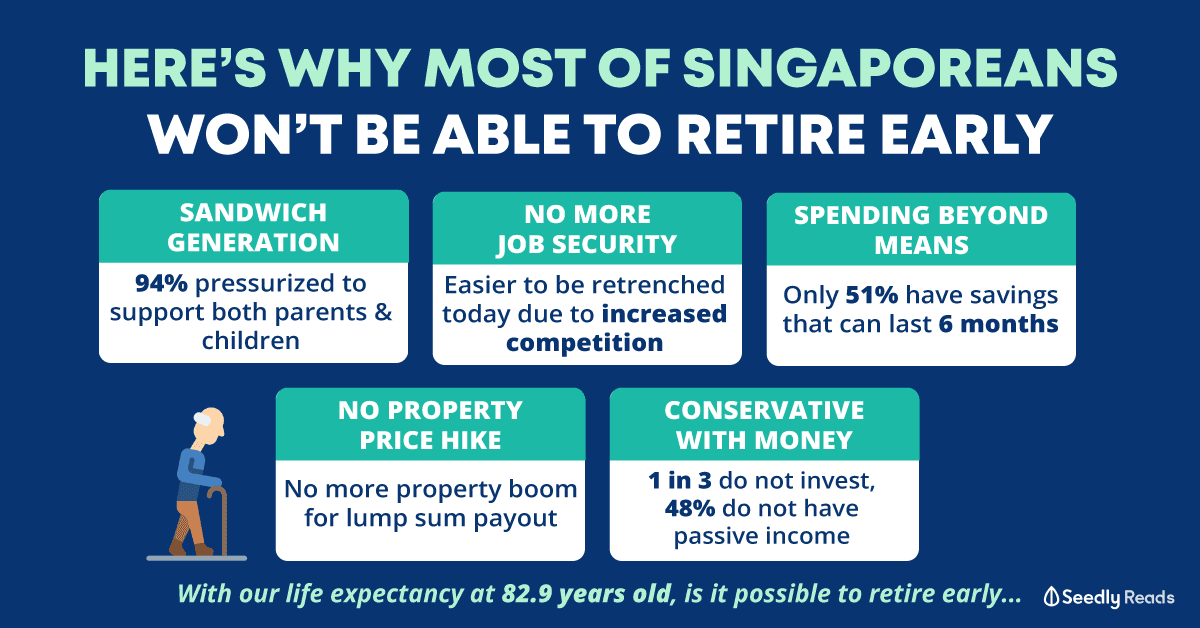 Most of us are fans of the idea of retiring early, but this might sometimes seem like a pipe dream.

This might be due to the intimidating numbers that we see when we decide to start planning for retirement. 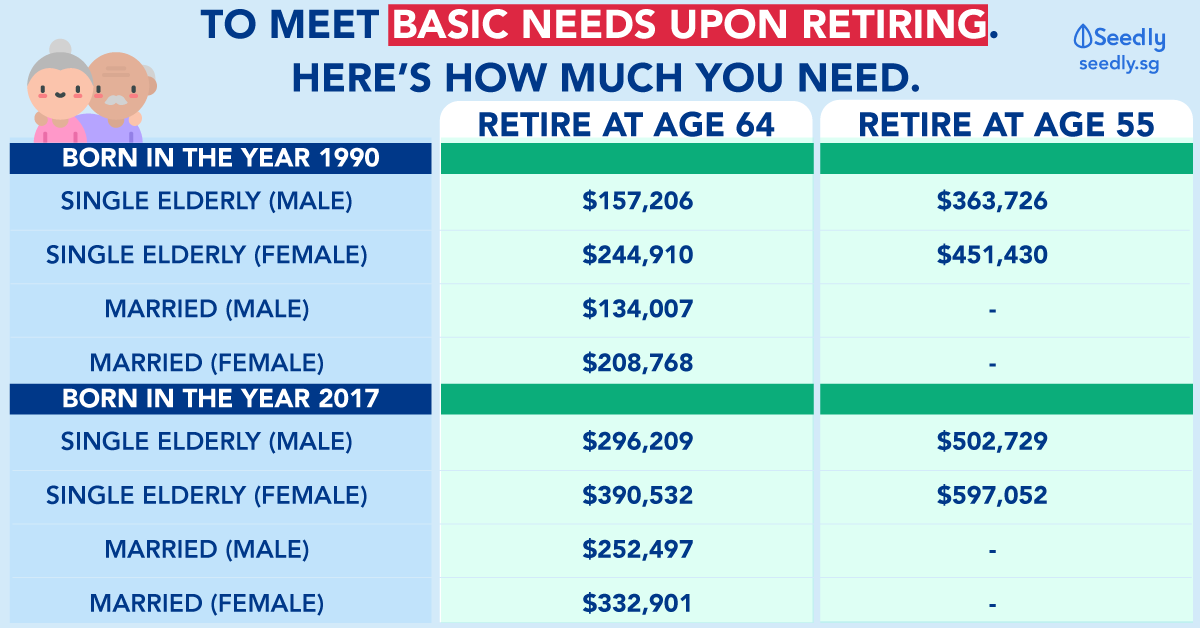 It’s pretty self-explanatory that if we plan to commence our retirement plans at a younger age, we got to have a bigger stash prepared in a shorter time.

Another factor might be due to the increase in life expectancy. 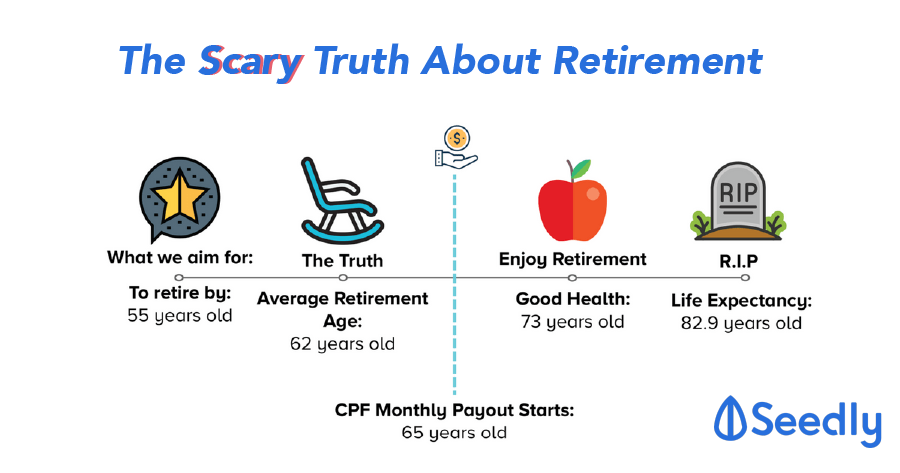 With the average life expectancy of Singaporeans to be 83.2 years old (according to the Populations Trend 2019 Report published by Singstat), it is no wonder that many of us would have the fear of having our retirement funds running out.

Ever daydreamed about the day of your retirement, exiting your tiny office cubicle while tossing a stack of documents in the air?

And then promptly returning to reality and thinking that that would only happen 50 years down the road?

While the idea of early retirement doesn’t have to be one that only exists in our dreams, it unfortunately is not part of the realities of many.

Here are some factors that may cause a delay in our retirement plans.

TL;DR: Here’s Why Most Singaporeans Might Not Be Able To Retire Early 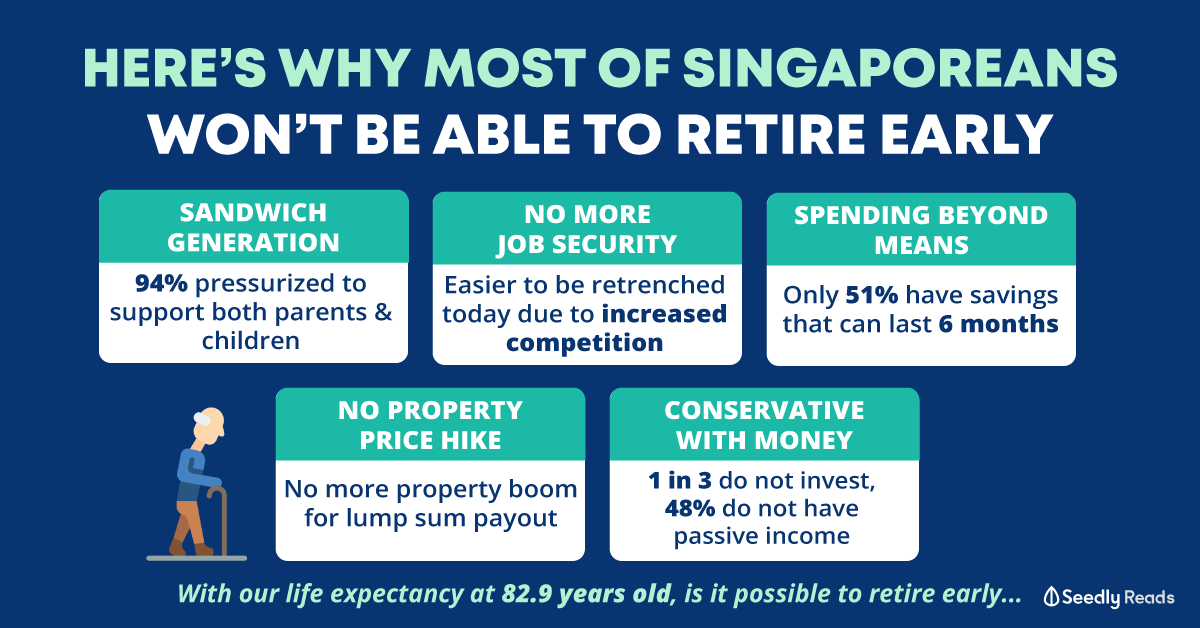 1. Part of the Sandwich Generation

The Sandwich Generation refers to the generation who needs to take care of their ageing parents while supporting their own financial needs, as well as their children’s.

Like the fillings of the sandwich, these people are ‘kiaped‘, or financially trapped in the middle.

A survey done by NTUC Income revealed that 94% of parents (35-55 years old) face the pressure having to support their parents as well as their own family.

While children ideally shouldn’t be their parents’ retirement plan, some parents might require financial support for their retirement needs.

This would mean quite a hefty sum to fork out, while hoping that their CPF payouts would help offset some of these financial costs.

We all know that raising a child isn’t the cheapest thing either.

In order to put an end to the cycle of such a financial struggle, there is a need for intense financial planning and crazy determination.

Having more dependents that rely on your finances also meant a slower accumulation of your own pot of retirement funds, why might possibly mean a delay in early retirement plans.

Back in our parents’ days, being a University graduate would mean a gateway to success.

It was more common to see them holding jobs that were ‘iron rice bowls‘, with many sticking to their first job and treating it as their last.

With this, it was easy to remain complacent at work without having the fear of being laid off.

These days, there is no longer a luxury of being complacent, with so many factors that threaten our livelihoods.

This includes an increase in automation used in industries, and also competition as our recruitment borders are no longer confined geographically (hello virtual jobs and work-from-home practices!)

Singaporeans now live with greater job insecurity than in the past, and are more vulnerable towards retrenchment.

Retrenchments would undoubtedly cause our savings to take a big hit, and there is also a possibility of a pay cut if one were to move on to a different role in another industry.

Also, upskilling is also no longer a want, but a need in today’s society.

This is to remain hireable along with the changing times.

There is a need to continuously learn and pick up new skills (diversifying them as well) in order to stay relevant and employable.

What was considered as a given in the past is sadly no longer applicable today.

3. We Spend Beyond Our Means 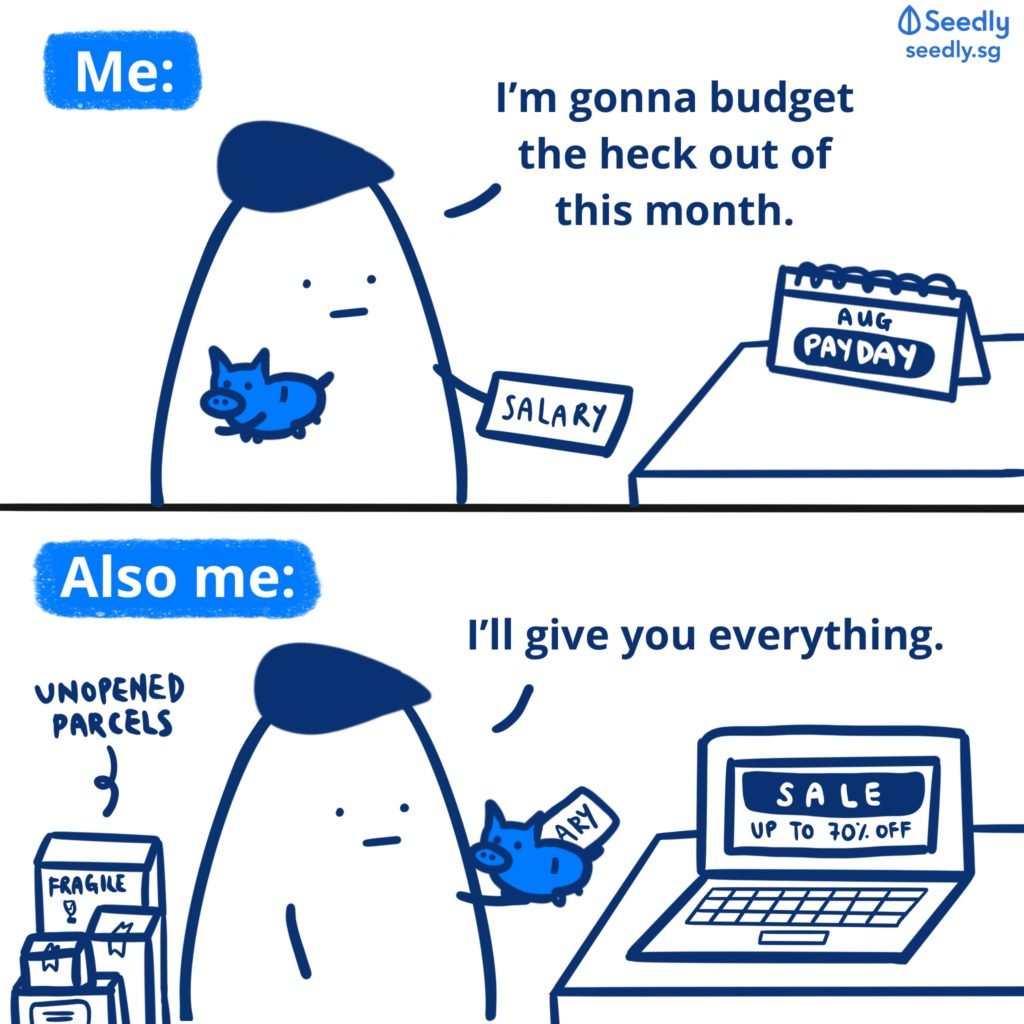 According to the OCBC Financial Wellness Index Report done in 2019, it indicated that only 51% of the respondents could stretch their savings to last for six months.

42% are on track to accumulate enough funds for an emergency.

Given that our emergency fund is the first thing that we should have before moving on to other areas such as investing, this is a worrying statistic.

It often shocks me how little savings some high-earners could have, given the amount of money they are bringing home every month.

It almost sounds fictitious but sadly is the truth.

There is an invisible rat race in Singapore where the act of owning cars and private properties would seem like a social status upgrade.

Unfortunately, some individuals lead these unsustainable lifestyles, and often end up overleveraging and spending beyond their means.

Those who are already used to a certain way of lifestyle also find it hard to downgrade when there is a need to.

Besides having less savings for retirement, an expensive lifestyle also means a larger retirement sum required to fund these needs after stopping work.

4. Cannot Depend on Property Boom

“Wah, our BTO last time only cost $35,000! Look at how it has grown ten-fold over the years! Unlike our salaries…”

Those who bought and sold properties during that period of time were fortunate to pocket a considerable sum of money.

With that, housing seemed like a great way to generate revenue which could be used for retirement purposes.

As we can see from the price index of HDB resale flats, the property prices have somewhat stagnated since 2013.

Unlike our parents’ generation, we cannot depend on another property boom to fund our retirement savings.

Even if there might be property cycles which we might be able to try to understand and bank on, it is difficult to predict whether such a boom would ever occur again.

According to Gobear’s 2019 study on Financial Health in Asia, Singaporeans have the highest financial literacy in Southeast Asia.

However, we underestimate our financial literacy, often assuming it to be lower than it is.

We can see that both Singaporean men and women are almost equal with regards to financial literacy, but women underestimate themselves a lot more!

This perception might be one of the factors that contribute to the conservativeness of Singaporeans when it comes to finances.

In the same OCBC survey mentioned above, 1 in 3 people does not invest as they see it as a form of gambling.

48% also do not have passive income.

Regular savings are still seen as the mainstay for most of Singaporeans’ retirement plans.

Stashing our money into our banks have always been seen as the ‘safest’ method of growing your savings.

This habit began since our parents’ time, where the banks were the go-to space for our money.

That definitely made sense back then, since their interest rates for deposit accounts were unlike the 0.05% we have now…

Do you ever remember seeing such beautiful interest rates for a bank deposit account?

However, leaving our money in our bank accounts today would mean losing money due to inflation, as our core inflation is higher than our banks’ interest rates.

Being conservative with our finances would mean having our savings slowly eroding away, which is definitely frowned upon when it comes to building our retirement funds.

Instead, know that investing isn’t as intimidating as we think, and it’s time to get started with it.

Is It All Doom and Gloom for Us Then?

Does it mean the retirement skies are grey and we might… never ever be able to retire? 😭

Fret not, for not all hope’s lost!

If you’re reading this article, there’s a good chance that you’re more financially woke than a couple of your peers. *pats back*

Acknowledging the need for retirement planning is the first step anyone can take.

Know that retirement planning should start as early as you can, and not something you should only start thinking of when you’re old and grey.

In fact, a longer timeline would also mean having the luxury to tap on the magic of compound of interest.

By taking note of the retirement funds you might need 40 years (or 20, if you’re planning for an early one) down the road, it would motivate you to work towards this financial target through prudent spending and careful planning.

Couple it with a few pointers that we usually advocate – Be prudent and spend wisely, invest as much as you can, get proper insurance coverage and live your life within your own means – you’ll be off to a great headstart.

Let’s be that few who would look back and say:

If you’re looking to get any other retirement planning tips, don’t forget to ask them away at our SeedlyCommunity!