Don't Waste Your Money On These Silly Mistakes! Be Wise & Stay Away From These Everyday Offences Don't Waste Your Money On These Silly Mistakes! Be Wise & Stay Away From These Everyday Offences

Singapore Is A “Fine” City…

If there is anything more famous than our Bak Chor Mee and Nasi Lemak, it will be the signs that decorated our island.

You see them almost everywhere, on the train, at void decks, and even when you are taking a piss, these signs take no break in reminding you of the possible fine when rules are violated.

The worst way to lose money is probably through fines. Be it a careless mistake or a reckless moment, there is zero possibility of getting your money back. 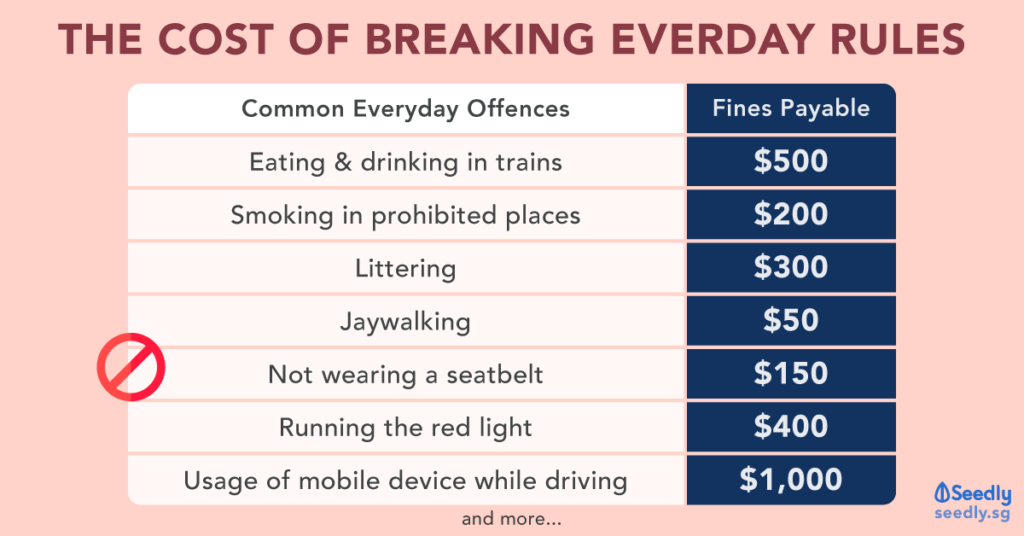 To protect your pockets from silly mistakes, here are the most common everyday fines in Singapore you need to be aware of:

Many sagas of eating on trains have made it onto the Straits Times the past couple of years. If a lady who ate a sweet to relieve her motion sickness could get fined $30, we know not to mess around.

Getting caught eating or drinking on the train will get you up to a $500 fine.

Don’t poke that straw into your Koi.

Congratulations, it’s not illegal to eat on the bus!

But we know in our hearts that people will still stare us down if we do.

All of us are aware that smoking is no doubt expensive in Singapore.

Places that prohibit smoking include:

This list is not exhaustive but make sure to check so that you don’t end up paying a fine!

Singapore prides itself ourselves as a Clean and Green City and it surely does not tolerate littered pavements and streets.

First-time offenders can be fined up to $300, including Corrective Work Order (CWO) to pick or sweep up litter to reflect on how litter can mar our living environment.

After all, nothing works better than public shaming.

A person who commits any act of vandalism attempts to do any such act or causes any such act to be done will be fined up to $2,000 and be imprisonment for up to 3 years, including 3 to 8 strokes of the cane if it is not a first-time conviction.

Vandalism includes drawing, writing, marking or inscribing with pencil, crayon, chalk and other substances that are indelible.

If American Teenager Michael Fay’s saga didn’t express well enough this is illegal, I don’t know what else did.

You’ll probably know this by now, but riding of e-scooters on footpaths will now cost you a fine of up to $2,000 and a possible jail term of 3 months.

Cyclists are required to dismount and walk with their bicycles when crossing an overhead bridge. First-time offenders can be fined up to $1,000 and may face 3 months jail term.

Even though most cars have an alert system if the driver is not wearing their seatbelt, it is equally important that passengers do the same too.

If you’re not wearing your seatbelt or fail to ensure that all your passengers are wearing theirs, you’ll be fined $150 and have a deduction of 3 demerit points.

Failing to give way to ambulances, police vehicles, the fire brigade or oncoming traffic at junctions and roundabouts can land you in a $150 fine and a deduction of 4 demerit points.

Speeding, depending on the various speed limits will cost you upwards of $150 and up to 24 demerit points deducted.

Watch out for the speed cameras and drive safely!

Running the red light is greatly penalised in Singapore, costing you $400 and 12 demerit points. Stop when the light turns amber!

Your licence will be suspended should you accumulate more than 24 demerit points within 2 years.

A first-time offender will be fined up to $1,000 and can be jailed for up to six months. Using your mobile device when the vehicle is stationary, for example at the traffic light is not advised but also not an offence.