The State of Income Inequality in Singapore in 2020
272
shares 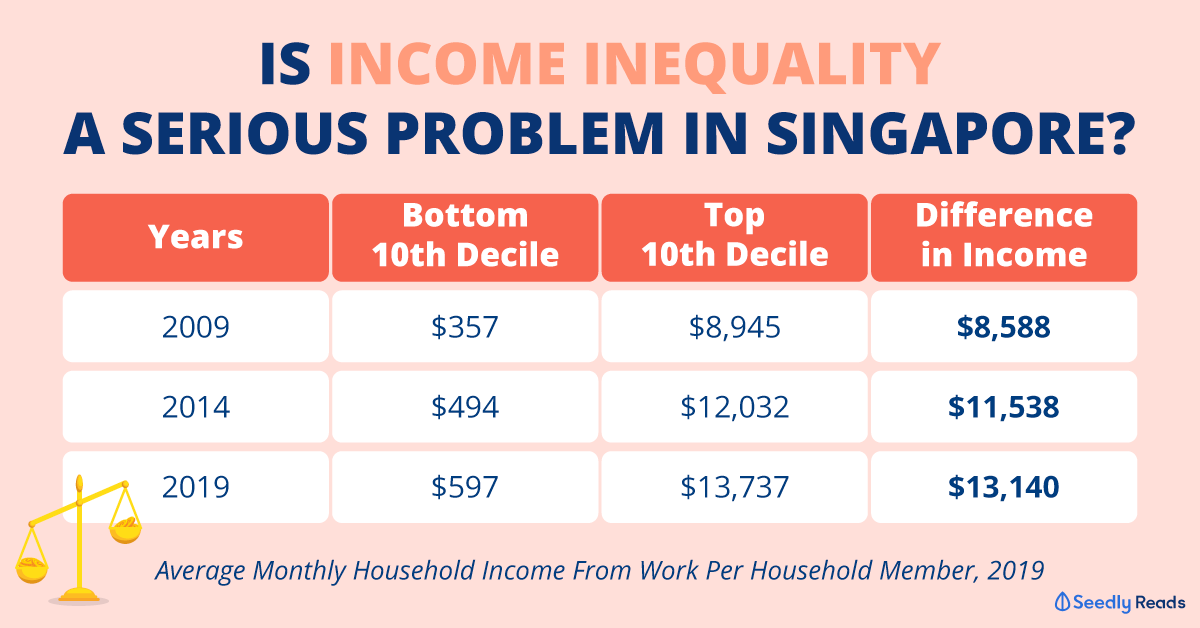 Inequality is one of the most serious issues facing Singapore today and if not tackled carefully, will cause society to fracture… While Singapore has done “relatively well” in reducing inequality over the years through “multiple lines of assistance”, more has to be done.
~Home Affairs and Law Minister K Shanmugam at the launch of the Red Cross Junior Club and Project C.A.R.E launch in 2018

Studies have shown that high and sustained levels of inequality, especially income inequality are correlated to health and social problems.

According to the World Bank, Singapore’s GDP per capita of about US$65,233.30 puts the country at number 14 in the world. As such it is considered one of the richest countries in the world.

However, despite Singapore’s riches, the county is facing the issue of income inequality, an ailment which plagues rich and poor nations alike.

But, what is the state of income inequality in Singapore?

We delve deep into the issue to find out.

TL;DR: The Issue of Income Inequality in Singapore

Income inequality in Singapore is one of the issues that Singapore has been contending with and is driven by factors like deep-rooted social stratification and entrenched beliefs and attitudes towards redistribution policies.

As such, the widening income gap between the poorest and richest Singaporeans is concerning.

In addition, the Government measures implemented to address inequality have been working so far, but there is still room for improvement and more has to be done.

Causes of Income Inequality in Singapore

Before we start, you will need to understand what causes inequality around the world and in Singapore.

To address this we look at a report published by Dr. Ravi Kanbur, Professor of Economics at Cornell University and his team of international experts for the International Panel for Social Progress (IPSP).

In the report, the researchers identified what are the main drivers of inequality which have the attributes of being deep-seated, and slow to change.

As such inequality has the tendency to reproduce itself over time and is driven by:

In the Singaporean context, income inequality is largely measured at the household level with the biggest differences existing between those in the bottom 10% and top 10% of households.

As for the entrenched beliefs and attitudes towards redistribution policies, it applies to meritocracy, a foundational guiding principle of our city-state. More research needs to be done on how it potentially contributes to inequality in the country.

Although the Singapore Government has made strides in tackling the income gap between those in the bottom 10% and top 10% of households has actually widened since 2009.

The following data measures households with at least one working person.

Although this is concerning, there is more to this picture.

This is encouraging but it is clear that more needs to be done to address this persistent trend in wage inequality.

I understand that asking for a totally equitable society in Singapore is next to impossible in our capitalistic economy. But as Minister K Shanmugam has said more can be done to reduce income inequality.

Gini Coefficient in Singapore Drops to its Lowest Since 2001

And more has been done.

The metric can range from any value between 0 to 1.

A value of zero means that there is perfect equality which can happen if everyone has the same income. A value of one or (100%) represents maximum inequality where amongst a large group of people, only one person holds the income.

In the international community, there are many ways that the Gini Coefficient is calculated. As mentioned earlier Singapore’s Gini coefficient is generally calculated based on household income from work per household member. Whereas for other Organisation for Economic Co-operation and Development (OECD) countries, it includes income from all other sources, like investments and property

According to the 2019 Department of Statistics’ Key Household Income Trends report, Singapore’s Gini coefficient stands at a low 0.452.

After accounting for government transfers and taxes like the Workfare Income Supplement the 2019 Gini coefficient falls even lower to 0.398.

Well, how does this compare to other countries?

I would refer you to the latest statistics from the Ministry of Finance which converts Singapore’s Gini calculation method to the OECD method which uses the square root scale.

Based on the value before taxes, Singapore’s 2019 Gini coefficient of 0.454 can be considered lower than many other developed countries like the United Kingdom, Japan and Germany.

After accounting for taxes, Singapore’s Gini coefficient of 0.398 is not too competitive, losing out to the likes of European countries like Germany, France, Norway, Sweeden, and Asian countries like Korea and Japan.

An important thing to note is that these countries tend to have generous redistribution policies funded by higher overall taxes levied on the working population and the middle class.

Instead, Singapore’s approach is more precise, relying on lower taxes to reduce the burden on taxpayers and targeted policies for the lower-income groups.

Previously, the Government had enacted many redistributive policies targeted at the lower-income groups.

For example in 2019, the average Singaporean living in one and two-room Household Development Board (HDB) flats enjoyed $10,548 in government transfers.

This came in the form of government transfers through schemes like the Workfare Income Supplement, rebates on utilities, service and conservancy charges rebates and more.

Comparatively, Singaporean staying in other dwelling types such as HDB four or five-room flats and condominiums received about half of what the one and two-room flat dwellers received.

In addition, the Singapore Government implemented the Progressive Wage Model back in 2012 to raise the income of lower-income workers. For more on this, check out our article about whether Singapore should implement a minimum wage policy for Singapore’s lower-wage workers!

If you would want me to paint a picture of income inequality in Singapore, it would be a ‘cheem’ (deep) impressionist painting; really complicated.

First the bad, there seems to be a widening income gap between the poorest and richest Singaporeans.

However, the salaries of low-income workers have been growing faster than those with higher income.

Also, the Government measures implemented to address inequality have been working so far, but there is still room for improvement compared to other countries.

In our capitalist economy, it is unavoidable that Singapore will have income inequality.

The Singapore Government had taken strides to improve it thus far, and I hope that the next Government will be able to carry on the good work as more has to be done.

What Are Your Thoughts on Income Inequality in Singapore? 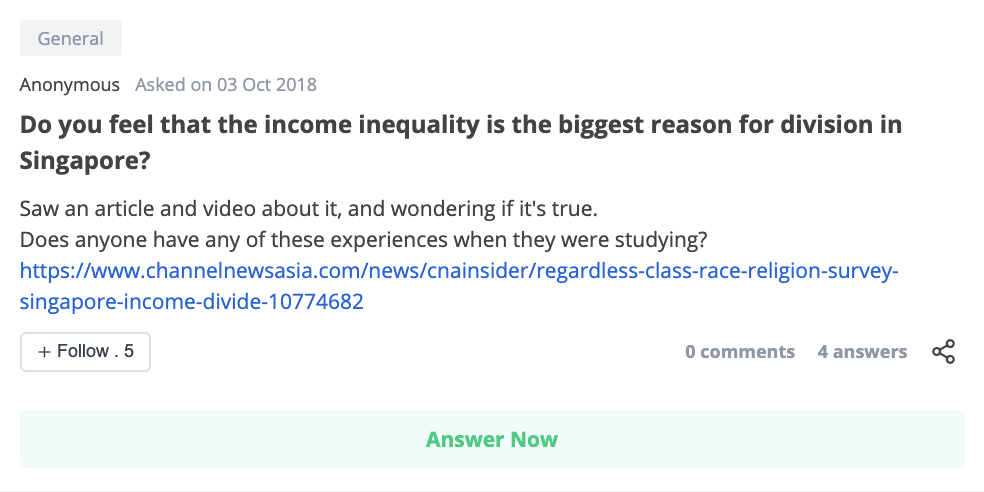 Jump in the discussion on our friendly SeedlyCommunity, where you can also ask questions about investments, stocks, career, property, CPF, credit cards, savings, insurance and get them answered by our savvy and helpful community members!