Singaporean's Guide to Mahjong Winning Hand's Probability, Scoring and How to Mahjong
5215
shares 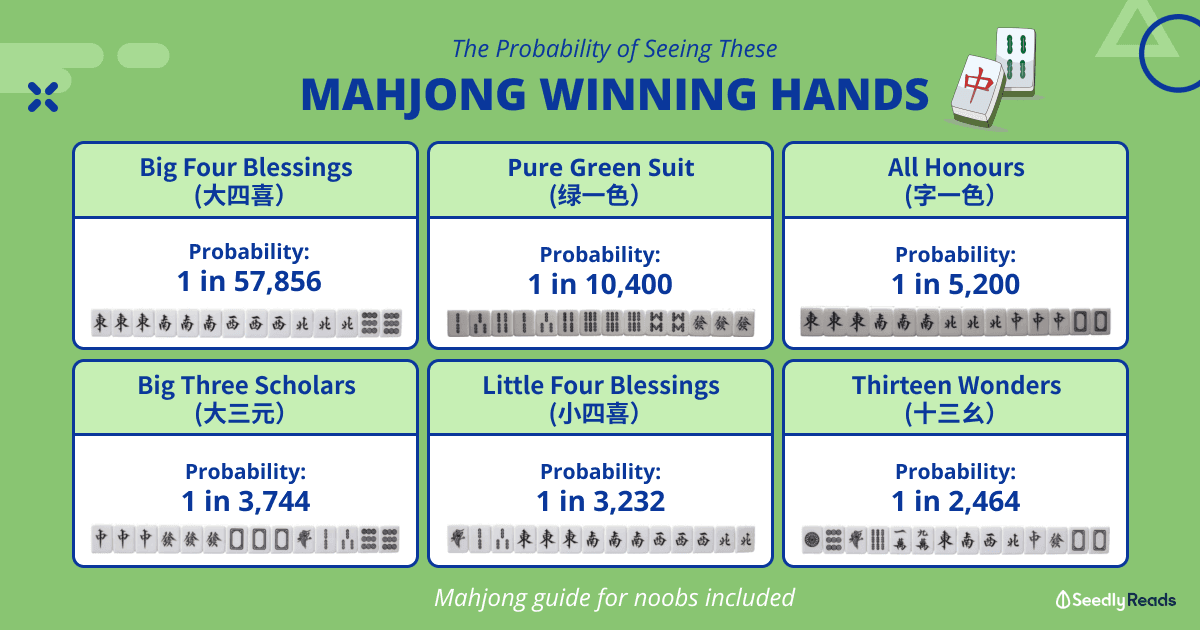 Way before Crazy Rich Asians made the game of Mahjong famous by slotting it into the most important scene in the movie, some of us Singaporeans are already killing it in our self-directed “God of Gamblers” series.

Week in and week out, we fully utilise the “healing power of mahjong” and how it treats senile as an excuse to gather with our friends or family members over a game of mahjong.

Mahjong is good, they say. It treats senile, they say.

That was before I lost all my Taxi money and end up walking home.

With that, we compiled a Mahjong guide and find out the probability of some of these winning hands:

The Probability of Seeing These Mahjong Winning Hands 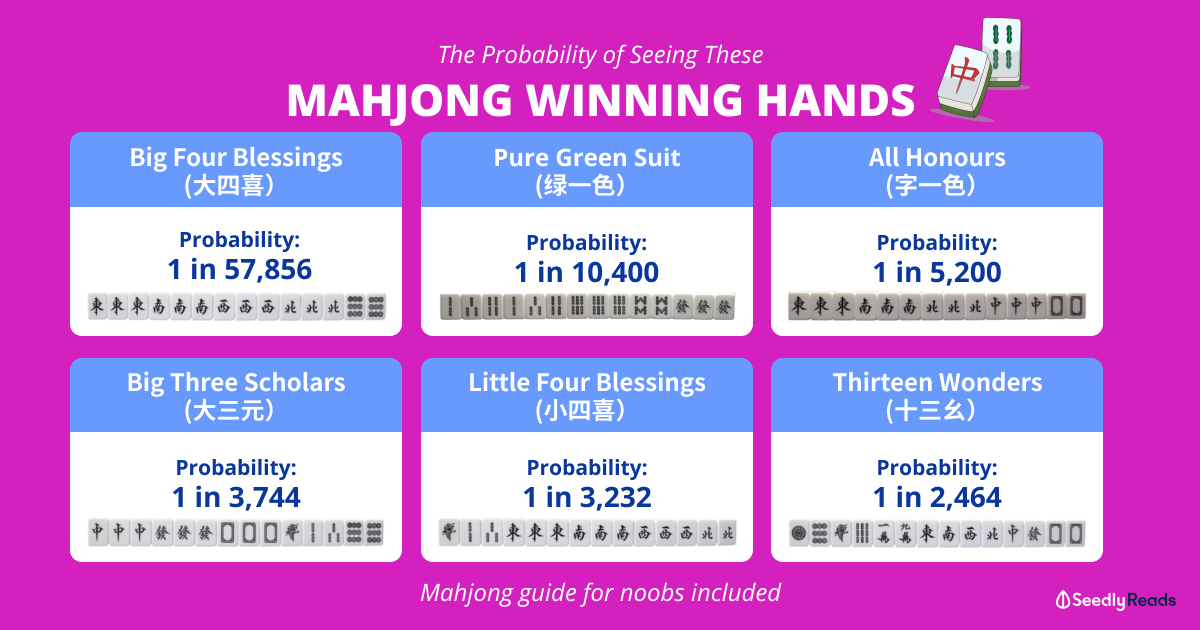 Some of us are guilty of taking Instagram stories of our tiles whenever we win with a certain hand.

We get it, you made some money, well-done!

The truth is, not all Mahjong hands are created evenly. Some of these hands have a lower chance of happening than the rest!

Based on a study done, if you were to:

Here are the dates on which you will see these Mahjong hands:

The amount of money you win in a round of Mahjong depends on the number of Doubles (some people call them “tai” or “fan”) your combination entitles you to.

If you are having trouble remembering how many Doubles your combination entitles you to, we did a compilation to help you out!

Further Reading on the Probability of These Mahjong Winning Hand

Mahjong Combination: All Chows without any animal or bonus tiles (平和) and Mixed Suit (混一色)

All Chows without any animal or bonus tiles (平和) and Mixed Suit (混一色) the more common winning hands in a game of Mahjong. These two combinations have a 1 in 16 chance of happening throughout a round of mahjong.

Here’s what an “All Chows without any animal or bonus tiles (平和)” combination looks like:

It is a winning hand which consists only of consecutive numbers in sets of three. The set should not have any flowers, animals, own wind or dragon tiles in it.

For Mixed suit, it is a combination made up of tiles of the same suit and includes Winds or Dragons tiles.

A Pure Suit is a combination made up of tiles from the same suit (eg. Bamboo, Circles or Characters).

For every 208 rounds of Mahjong game, there is a chance of players winning the game, with a hand completed by a replacement card. This is after receiving a flower or animal tile.

A winning hand that is completed by snatching a declared Kong from other players. There is a 1 in 320 chance of this happening.

Little Three Dragons/Little Three Scholars is a hand made up of 2 sets of Dragon tiles and the remaining Dragon set as the eye.

Now, to some of the hardest combinations. These are the only type of winning hands worth putting on your social media.

This is, in my opinion, one of the hardest combinations to get, but I was wrong.

Turns out, the Thirteen Orphans/Thirteen Wonders is actually the easiest when compared to the rest of the special combinations. There is a 1 in 2,464 chance of it happening.

We are now down to some of the rarer winning hands in mahjong.

The Little Four Winds/Little Four Blessings is made up of three of the Winds (in a pong or Kong)with one pair of the remaining Wind. This combination has a 1 in 3,232 chance of happening.

If you have three of the Dragons (in a pong or kong), you are winning the game with the Big Three Dragons/Big Three Scholars combination.

If you have a hand made up of either the four Winds or three Dragons, you have an All Honours winning hand.

This combination only appears once every 5,200 round.

We are down to the second rarest combination. The Pure Green Suit Hand has a 1 in 10,400 chance of happening.

No prize for guessing, but the Big Four Winds/Big Four Blessings winning hand has the lowest probability in a game of mahjong. With a rare 1 in 57,856 chance of happening, this combination definitely needs to go onto your Instastory!

This winning hand requires all the Winds (be it pong or kong) to be in the combination.

How To Play Mahjong

There are a total of 148 tiles in a Singaporean Mahjong set.

The Flower and Animals Tiles

There is only one of each per set.

How To Win Mahjong

Over a game of mahjong, tiles are distributed to the players and the game is played.

What Happens Next After A Win?

A mahjong round is completed when all four “Winds” are completed.