How Much Does the Annual National Day Parade Cost?
136
shares 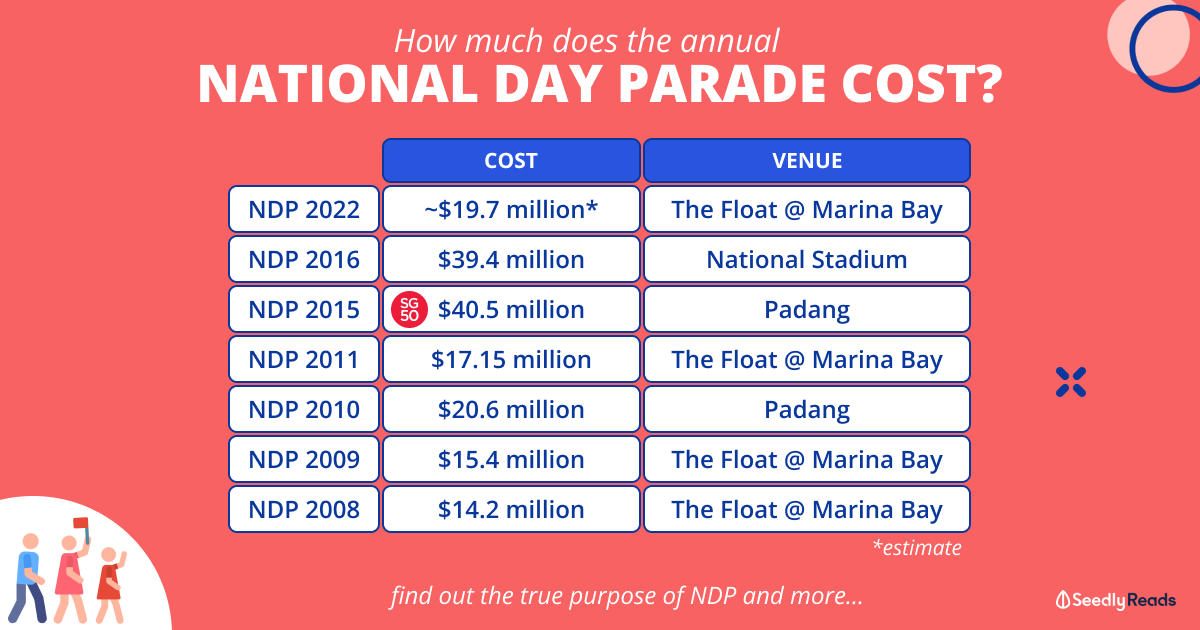 How Much Does the Annual National Day Parade Cost?

National day is just around the corner!

And with that, comes the annual National Day Parade (NDP) with dazzling fireworks, aerial displays and the famous Red Lions.

But of course, holding such a large-scale event costs us money.

How much you ask?

TL;DR: How Much Does the Annual NDP cost?

Thanks to questions asked during Parliament and announcements on the news, we’re able to get a good sense of what the costs are like.

However, we only have official information 2002 to 2016, so anything from 2017 onwards are based on our estimations and other news sources. These costs also do not account for inflation.

Why Do We Need to Hold the NDP Every Year?

Before we start saying that we are just “shooting taxpayers’ money into the sky”, let’s take a look at the whole purpose of the NDP.

“In good years, our parades rejoice in our progress and look forward to a better future together.”

“In difficult years, we still hold National Day Parades, to renew our resolve to weather the storm and take Singapore through to better days.”

Apart from celebrating our nation’s birthday, the NDP is also a testament to how far we have come, and a display of our defence capabilities.

Moreover, it’s a unique opportunity for the SAF, Home Team, as well as other government agencies to come together and execute what is, arguably, the cheem-est (Hokkien: most complex) government operation every year.

The NDP hence serves as a validation that Singapore is able to deliver and get things done well.

Can We Really Afford the NDP?

There are many out there who believe that the funds used for NDP could be directed elsewhere, especially since we have the pandemic to deal with and the recent posting of MAS having a $7.4B net loss in FY2021/22.

But let’s take a step back and look at our inaugural NDP in 1966.

As a nation just starting out, we would have barely been able to afford it then since the money could arguably be put for better use.

We’ve also held the NDP every year despite major setbacks such as the: