The NTUC Union Membership Programme: Is it Worth $117 A Year?
327
shares The NTUC Union Membership Programme: Is it Worth $117 A Year?

I’ve something of an embarrassing confession.

Up till I’d begun researching for this piece, I didn’t have a hot damn clue what the acronym NTUC* stood for – much less the fact that it’s Singapore’s sole trade union centre. Are you judging me, now?

What I had known, however, was my mum’s staunch support for all things NTUC: the NTUC Plus! card, LinkPoints, the myriad of insurance policies under NTUC Income, the fact that members enjoy decent dividends and cash rebates.

In itself, NTUC presently has over 950,000 members. That’s around 5% of Singapore’s population forking out $117 annually for the NTUC Membership Programme.

Is it worth your money, though?

Let’s take a closer look at its ecosystem of benefits and programmes.

TL;DR: Is NTUC Union Membership Worth The $117 Annual Fee?

As we’ve established, NTUC membership costs $117 annually – or $9 monthly from January to November, and $18 in December itself. Fees are deducted through interbank GIRO.

You’ll automatically fall under the GB member category if your workplace has no union, meaning you’re in a position with no bargaining power.

That means you don’t get representation rights in the workplace – whether for wage negotiations or workplace issues – whereas OB members do. But more on this in a bit.

As an aside, students or non-working adults aged between 12 to 25 are also eligible for something called nEbO membership.

The lifestyle club sits under the youth membership arm of NTUC, and offers discounts on food, entertainment and enrichment courses, to name several.

Here’s what falls under the membership programme:

You’ll also find a more comprehensive overview of discounts, events and the like on the MyNTUC app. 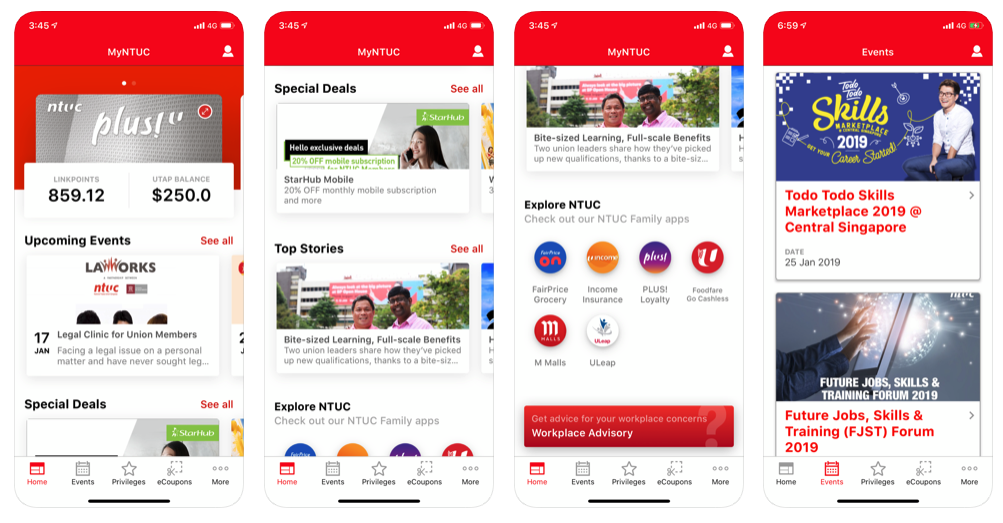 NTUC Plus! Rewards Programme and Cards

Upon signing up as an NTUC member, you’ll automatically be added to the Plus! Rewards Programme, which includes two cards: Despite their (very confusing) names, they’re in fact quite different.

It’s really quite simple to differentiate them, though: the black Plus! card doesn’t require you to be an NTUC member; conversely, the silver NTUC Plus! card does.

Besides these, you’ll also be able to sign up for the following cards for petrol discounts of up to 18.5%, extra rebates and more:

This one’s practically a homage to all the aunties (or inner aunties) out there, because you’re literally rewarded for shopping at NTUC FairPrice.

Here’s how it works:

Present your NTUC card at point of purchase to earn cash rebates and LinkPoints (2 points per $1 spent; minimum expenditure of $20 per day with combined receipts)

For cash rebates and dividends:

To be eligible, you’ll first need to purchase at least 20 NTUC FairPrice shares at $1 each, on top of an entry fee of $3.

Rebates and dividends are determined at NTUC’s Annual General Meeting – then distributed for the first $6,000 on your annual purchases. In 2017, members enjoyed dividends of 6% of the share price, plus 4% rebates on all purchases.

We last covered these perks in our guide to supermarket rewards programmes.

That includes coverage of up to $40,000 for death or total and permanent disability (TPD); union leaders, meantime, get double the sum assured.

If you’re looking to complement your group policy plan, LUV Term Life Insurance protects members and their spouses in cases of death or total and permanent disability, the latter up till the age of 65.

NTUC’s voucher programmes were designed specifically to help the lower income defray everyday costs. Be sure to note the application criteria – such as having a monthly household income of $1,500 or less (with no dependents), or $3,400 or less (with dependents).

The U Stretch Vouchers Programme offers a $2.50 discount off every $5 purchase at select NTUC Social Enterprises, such as Foodfare and NTUC FairPrice’s housebrands.

Then there’s the U Care Back to School (BTS) Vouchers Programme, which offsets the cost of school expenses for some 30,000 members’ children.

What happens when you’re stuck in a workplace whose unethical practices have inadvertently affected you? That’s where the NTUC Workplace Advisory comes in. GB members receive advice on handling such situations from professionals at no cost.

And if you’ve personal matters that need sorting, NTUC members also enjoy free legal advice from pro bono lawyers – whether for wills or matrimonial matters. The initiative’s a collaboration between NTUC, LawWorks, and The Law Society of Singapore.

With U Network, members are given access to training, job placement and networking opportunities. Here’s an overview of what falls under its umbrella:

All U Network members can also seek advice on workplace-related issues with the Tripartite Alliance for Dispute Management (TADM).

It’s all about lifelong learning – and just like SkillsFuture, NTUC’s Labour Movement arm aims to help working adults remain relevant in the workplace with career support advice and programmes.

I’d initially baulked at the thought of having to pay $117 annually for NTUC membership. Yet that works out to just $9.75 a month – which, all things considered, is reasonable if you’re reaping the full benefits offered.

But if they stepped up the benefits offered in terms of dining, entertainment, and wellness… I might just be tempted enough to get it.

Personally, for now, I think I’ll stick to the free Plus! card and chalk up multiple $5 vouchers from the Health Promotion Board’s National Steps Challenge.