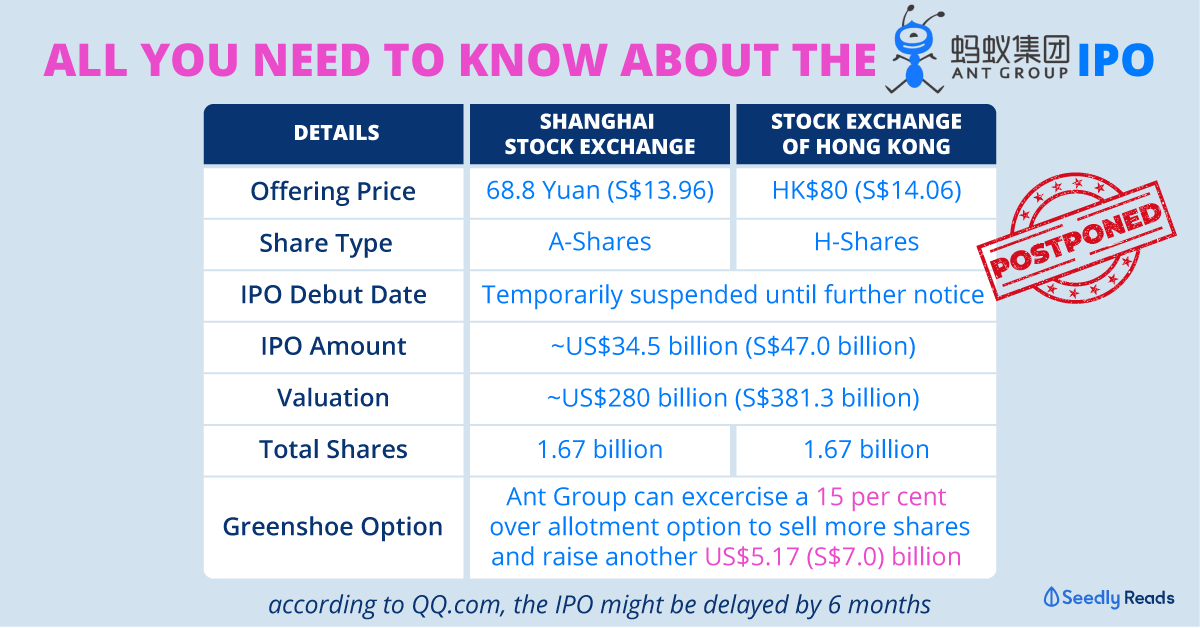 In a shocking move, the Shanghai Stock Exchange announced on Tuesday (3 Nov) that the Ant Group listing had been suspended until further notice.

Subsequently, the company announced that that the second half of its dual listing on the Hong Kong Stock Exchange will be temporarily suspended as well.

This Shanghai Stock Exchange added that the suspension was due to “material changes” in Chinese regulatory rules and standards on financial services.

Reportedly, Chinese authorities were concerned that Ant Group was subject to less scrutiny compared to state-owned banks and that the company was getting too big for their liking.

This could potentially result in the company being unable to fulfil the conditions for listing requirements.

It is unclear when the IPO will resume, as the company will have to adjust to the new regulations before it can proceed with the IPO.

But according to Chinese news portal QQ.com, the Ant Group IPO might be delayed for about half a year, citing an unidentified person close to Ant Group.

As such do keep this article bookmarked as we will update the article if there are any new developments.

The Hangzhou based company is set to list its shares in a dual offering on the Stock Exchange of Hong Kong (SEHK) and the Shanghai stock exchange’s STAR market: China’s answer to the NASDAQ.

This listing was supposed to happen on Thursday (5 Nov), but it has been suspended until further notice.

According to its prospectus, Ant Group is shooting for a US$280 billion (S$381.3 billion) valuation and a US$34.5 billion (S$47.0 billion) IPO if the market conditions are conducive.

Also, the company is also expected to sell about 11 per cent of its shares in the IPO

Here is what we know about Ant Group’s massive proposed IPO so far.

Ant Group will begin to accept subscriptions to its IPO in Shanghai on 29 October 2020, with only an estimated 20 per cent of the offering reserved for retail investors.

Here is all the information we know so far.

Also, here is a quick explainer of all the different Chinese equity share classes according to IndexUniverse:

In addition, the company has the option to raise another US$5.2 billion (S$7.0 billion) by exercising its Hong Kong and Shanghai greenshoe options.

FYI: Greenshoe options are underwriting agreements that allow the underwriter to sell more shares if the demand for its security exceeds what was initially planned.

If these options are exercised successfully, the company will be valued at about US$320 billion (S$435.6 billion).

To put this into context, Ant Group’s potential market capitalisation will make it about four times bigger than Goldman Sachs Group Inc. and even larger than JPMorgan Chase & Co.

Demand for the Ant Group’s shares is also off the charts.

According to the Nikkei Asia Review, institutional investors subscribed to over 76 billion shares (284 times oversubscribed) in the company’s initial offline offering tranche at the preliminary price consultation of its Shanghai IPO.

Before you consider investing in Ant Group, here is some background information to help you understand the company and its IPO.

Ant Group was started back in 2004 by Alibaba Group and founder Jack Ma as Alipay: a third-party mobile payments platform. Initially, Alipay was set up as an escrow payment service to facilitate transactions between buyers and sellers on Alibaba.

FYI: An escrow is defined as an arrangement where a natural third party holds and regulates the funds involved in a transaction. The funds will only be released once the terms of the agreement are met.

Buyers would make payment for goods via Alipay and the payment will only be released to the seller once the buyer is satisfied with the goods.

The company then underwent a rebranding exercise back in 2014 and was renamed Ant Financial Services Group to reflect its financial services industry ambitions.

In May 2020 the company dropped the ‘financial services’ in its name to become Ant Group Co.

This change is name is more than cosmetic, as the company is pivoting to position itself as a technology provider for financial service groups. This happened roughly after the company came under scrutiny from Chinese financial regulators who were concerned about Alipay’s huge influence on China’s financial sector.

Ant Group’s filing on Tuesday offered investors a peek behind the curtain of the company’s financials and business numbers.

The company’s ambitious proposed valuation goals is backed by the widespread adoption of its Alipay app.

The company claims that its Alipay app has a little over 1 billion active annual users and a staggering 711 million monthly active users in mainland China and around the world.

I almost forgot to mention that for the twelve months ending 30 Jun 2020, 118 trillion yuan (S$23.42 trillion) in financial transactions was processed in the Alipay app in mainland China alone. Internationally another 622 billion yuan ($123.5 billion) was processed.

Partly due to the widespread adoption, Ant Group’s finances are looking very healthy.

However, not everything is rosy for Ant Group.

At home, Ant Group is facing pressure from Chinese financial regulators who want to keep the company’s ambitious expansions plans in check.

Just last year, the company was running the world’s largest money market fund Tianhong Yu’e Bao which let Alipay users invest the spare cash they had in their Alipay accounts.

The size of this fund meant that it had the potential to cause major upheaval in the Chinese financial system if something happened with the fund.

The Chinese financial regulators then clamped down on the company, pressuring it to cut down the size of the fund and adhere to regulations like a requirement for third-party mobile networks to store their cash in commercial banks, and to process transactions through a Chinese government platform.

Ant’s overseas expansion plans into the US are also being curtailed by the increasingly frosty relationship between the US and China.

Back in 2017, the US Government blocked the company’s acquisition of US payments company MoneyGram.

More recently, in a politically charged move that occurred after Luckin Coffee was investigated for fraud; the US Senate passed the Holding Foreign Companies Accountable Act (HFCAA).

This could lead to delistings of Chinese companies on US exchanges that do not comply with the government’s stringent regulatory and audit requirement.

This increased scrutiny could also be why Ant Group is not listing its company in the US as well.

If you wish to subscribe to the Ant Group IPO, check out our guide to investing in Hong Kong IPOs for more details! 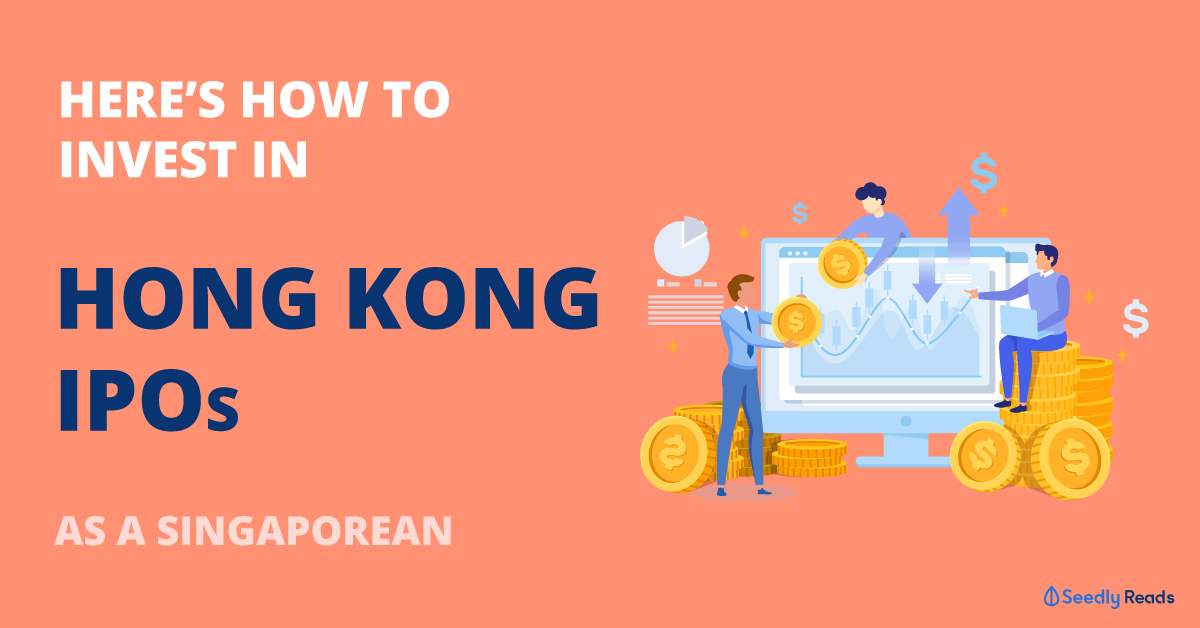 But as always, please do your due diligence on Ant Group before you do anything.

What Are Your Thoughts on the Ant Group IPO?

Jump in the discussion on our SeedlyCommunity, and share your take there!