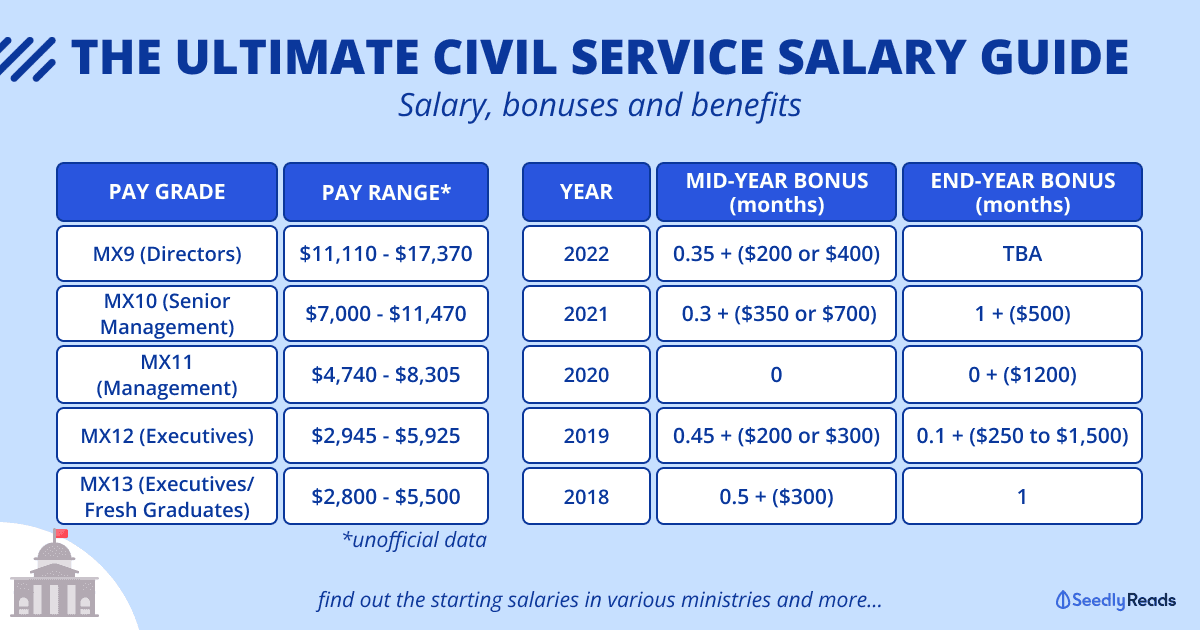 Passionate about serving Singapore all while commanding an iron rice bowl (stable) career?

With the announcement of a civil service salary raise for some 23,000 civil servants and the 0.35-month mid-year bonus for 2022, some of us might be curious about starting a career in the civil service.

So let’s find out how well civil servants are paid, the benefits of being a civil servant, and everything else you need to know! 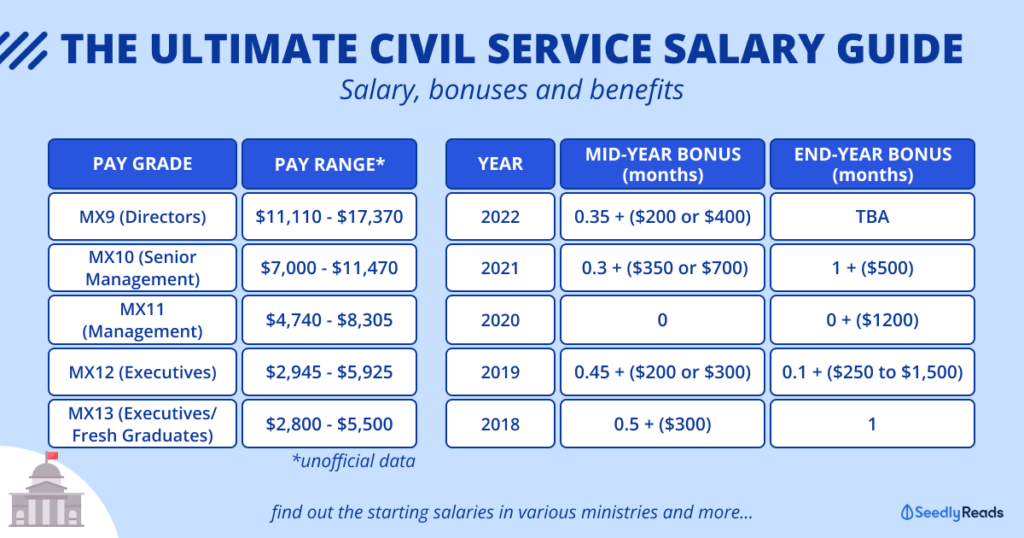 Civil servants are paid a salary comparable to that of the private sector based on job scope.

In addition to a stable career with salaries that are regularly reviewed, civil servants will get a confirm plus chop 13th-month bonus.

Other bonuses and increments depend on your individual performance and Singapore’s economic performance.

Who Are Considered Civil Servants in Singapore?

Before we go look at the numbers, let’s start out by defining exactly who are the civil servants in Singapore.

Contrary to popular belief, not all who work for the government are considered civil servants.

They are usually people who work in one of the following government organisations:

How Much Are Civil Servants Paid in Singapore?

The tables below are unofficial and compiled based on data pulled from forums.

Your pay is determined based on your pay grade under various schemes such as the Management Executive (MX) scheme.

While salary information is not made public, civil servants are paid a salary comparable to that of the private sector based on job scope.

And if you are in the tech industry, you can expect even higher pay.

The Public Service Division (PSD) has announced on 20 June 2022 that civil servants will receive a 0.35-month mid-year bonus.

How Are Civil Servants’ Bonuses Calculated?

Some may believe that bonuses in the government sector are based on your academic qualifications, nationality or seniority.

However, the official pay scale states that the amount of bonus you’ll receive depends on the following:

In essence, you’ll get a confirm plus chop 13th-month bonus while the rest depends on your individual performance and Singapore’s economic performance.

Civil Servant Bonuses in The Past

Here’s how much civil servants have been getting in bonuses with additional one-time payments in brackets:

Typically, these one-time payments are paid to those with lower wages to help them cope better.

Other Benefits of Joining The Civil Service

On top of job security and stable pay, a civil servant in Singapore is also entitled to a myriad of benefits.

With many Singaporeans always looking forward to long weekends and vacations, you’ll be pleased to know that the civil service also provides a variety of leave benefits including vacation, medical, study, marriage, maternity/paternity, childcare, and parent-care leave.

On top of a group insurance scheme, civil servants will also receive:

Get discounts and preferential rates for chalets, hotels and more.

Should You Become a Civil Servant?

Aside from an iron rice bowl career and benefits, there are some things that you should consider.