The Premier League is back!

After about three months of no football due to the COVID-19 outbreak, the Premier League restarted today with a game between Aston Villa and Sheffield United and the game between Manchester City and Arsenal.

I for one am most excited to see my favourite team Manchester United back in action as live sports again is such a relief.

Hopefully, the virus will be kept at bay and the fans, managers and players will be safe during this difficult time.

Speaking of players, I came across an article on the Guardian that stated that 500 former Premier League players are estimated to have lost £1 billion (S$1.75 billion) to bad investments and to tax demands from Her Majesty’s Revenue Collection as well after they invested in schemes that were touted as tax efficient.

Another shocking statistic from the article came from a 2014 report by XPro, a charity that helps former UK professional players adjust to life after football.

The research found that about 40% of former players that used to earn huge salaries back in their Premier League heyday went bankrupt five years after they stopped playing.

This goes to show that you might be earning an astronomical amount (the average Premier League player’s salary was S$40,200 a week in 2014 according to Deloitte) — you can still go broke.

However much you earn, it is important that you manage your finances well, and a great way to do so will be with the Seedly Money Framework. 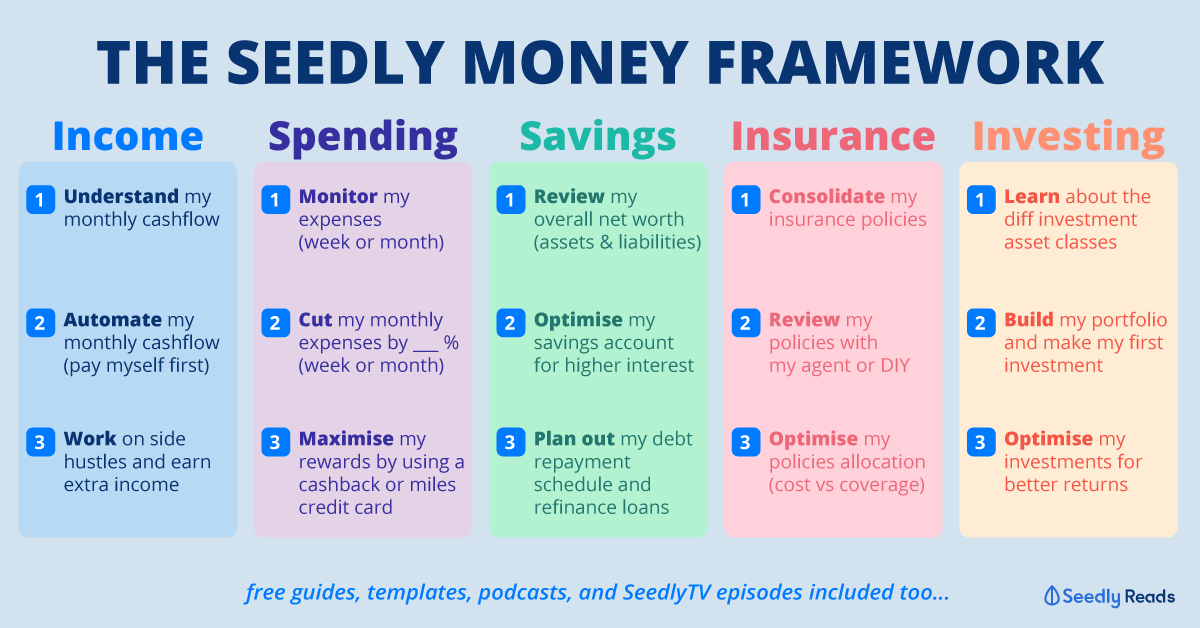 I will be using this framework to explain how these former Premier League footballers might have ended up bankrupt and extract personal finance lessons which you can apply to your own life.

These lessons will then be enhanced with the six pillars of the Seedly Money Framework.

Income — Develop a Side Hustle

With Premier League footballers earning astronomical amounts, you would think that they would not need to work on their side hustles.

But there here been a small minority of enterprising players who are preparing for life after football by developing additional income streams.

For example, Southampton left-back Ryan Bertrand is an entrepreneur who set up Silicon Markets in 2015 — a retail and institutional brokerage with a focus on computational software and technology.

Theo Walcott the Everton attacker is a writer who has published four children’s books with Random House about his adventures playing football as a schoolboy.

If multi-millionaire footballers are doing this there’s no excuse for you not to be doing the same. Check out our guide to side hustles which will serve as a good starting point.

Finding a side hustle is one of the steps to building your income. But before you go out to find a side hustle it is important for you to achieve these two goals first.

Firstly, you will need to first understand your monthly cash flow and track how much you’re spending and saving. A simple excel sheet or the Seedly App (on iOS and Android) to help you keep track.

Next, you can consider allocating your monthly salary into 3 separate accounts for Savings, Wealth (Investing) and Expenses, you ensure that you can only spend from ONE account.

Spending — No Need to Keep up With the Joneses

Danny Cadamarteri a former Premier League player for Everton from 1996 to 2002 and a whole host of other clubs later on in his career.

In an interview with FourFourTwo magazine, Danny remarked that:

‘I saw wealthy players buying their designer wash bags and new cars and felt I had to keep up with them.’ ‘It’s easy to get caught up in it all.

The glamorous but expensive lifestyle of a Premier League player the resulting peer pressure can be hard to resist when you are young.

Manchester United player Eric Dejemba-Djemba was reported to have owned a fleet of 10 4×4 cars but was declared bankrupt in 2007.

Footballers like many of us humans are not immune to this silent force which implores many of us to spend to keep up with our peers.

Although we may not have mansions and fleets of cars, I am sure you can relate to being envious of your rich relative or friend buying a new car or house.

You might be tempted to keep up with their lifestyle and spend unsustainably. This kind of pursuit is damaging as debt can sometimes be the only way to keep up.

This creates an ugly situation when your salary does not grow or decline yet house and car costs continue to grow.

A 2012 paper Keeping Up with the Joneses and Staying Ahead of the Smiths: Evidence from Suicide Data published by the San Francisco Federal Reserve. suggests that suicide risks are higher in richer neighbourhoods

The study observed that for two people with the same income but living in different countries, the person with the higher average income in the neighbourhood is 4.5% more likely to commit suicide.

So if keeping up with our peers materially does not make us happy — why do we keep trying?

Instead, live within your means by monitoring your finances, committing to cutting down your expenses by a percentage amount each month and use credit cards to maximise your rewards. Your future self will thank you for this.

For many a young Premier League footballer, the lure of lavish spending is hard to resist.

This amount that these footballers earn as much in a year is what many earn in a lifetime. They then retire at a very young age with many professional careers ending in their late 30s.

Good financial habits and decisions like learning how to save regularly need to be made as early on as possible as it develops into habits that last us a lifetime.

A good example of this would be the case of a high-profile 24-year-old Premier League star playing for one of the London clubs.

However, he struggles to save or even makes ends meet at the end of the month as he was committed to paying large salaries to family, friends and acquaintances to be part of his entourage.

I can’t overemphasise the importance of saving as it provides a good defence for your life when things go south.

To get this aspect of your life together, take some time to review your net worth (assets and liabilities) so you can get a better sense of your financial progress and goals. We may not have an entourage, but we can certainly cut out unnecessary liabilities that may be weighing us down.

Once you have established your net worth the next step will be to optimise your savings accounts.

You can check out this free Seedly Savings Account Calculator to figure out which is the best high-interest savings account to use.

Lastly you will need to plan out your debt repayment schedule and refinance loans for cheaper rates if possible. If you have any unsecured or personal debt, these are some of the best hacks to clear your debts fast and effectively.

Although it may be hard to feel sympathy for these uber-rich footballers, I would like to think that no one would like to see people set up to fail.

He remarked that these academy prospects:

“live inside the bubble of an academy, so they’re shocked to hear they might only get half of their wage after tax and national insurance contributions.”

Often a lot of these players are not as well informed about insurance and are advised by the wrong people.

Former Manchester United striker Louis Saha set up Axis Stars in 2014, a community platform that allows footballers to discuss insurance, finance, sponsorship and other career-focused matters with fellow professionals, as well as contact trusted experts in those fields.

Similarly, when it comes to our insurance coverage, we need to be very aware as well to protect our finances. Not everyone will come to us with the best intentions so it is important to stay guarded and informed.

Then you will need to out the key insurance policies that you and your dependents need.

Finally, you will need to optimise your insurance coverage and try to get the best bang for your buck.

A great way to do this is to read real-user reviews about insurance products left on SeedlyReviews to find out for yourself!

Investing  — Do Your Due Diligence

In an interview with the Financial Times, former Wolverhampton Wanders player Seyi Olofinjana spoke out against the misconception that footballers were spendthrifts who did not think about their financial future stating:

“I think a lot do, actually — it’s just that there is a lot of naivety and ignorance about [personal] finance.”

He added that when footballers were investing for their retirement they do not put much thought into it as:

“We think we’ve invested, but there are a lot of guys out there who are ripping players off. It’s a question of making sure you know what you’re investing in.”

The Guardian reported that that 500 former Premier League players are estimated to have lost £1 billion (S$1.75 billion) to bad investments based on bad investment advice and tax demands from Her Majesty’s Revenue Collection’s tax demands as they participated in investment schemes that were touted as tax efficient.

As Seyi Olofinjana has pointed out a lot of these players are naive and ignorant about personal finance.

The next steps would be to think of what investment goals and what kind of returns you are expecting. A good starting point would a simple diversified portfolio consisting of stocks and bonds.

Once you’ve got your feet wet, and you received your dividends the sky is the limit.

You can use our free REITs Tool or online stock screeners to help you invest better, and you should continue investing and reading widely

An even faster way would be to ask questions and have active investment-related discussions with our friendly SeedlyCommunity!

Writing this was a sobering reminder that even with a lucrative salary, a bad grasp of personal finance can set you up for failure.

Even footballers with their riches are not immune to this. Therefore it is important for us to develop good stewardship of our finances.

The Seedly Money Framework will be a great place to start.