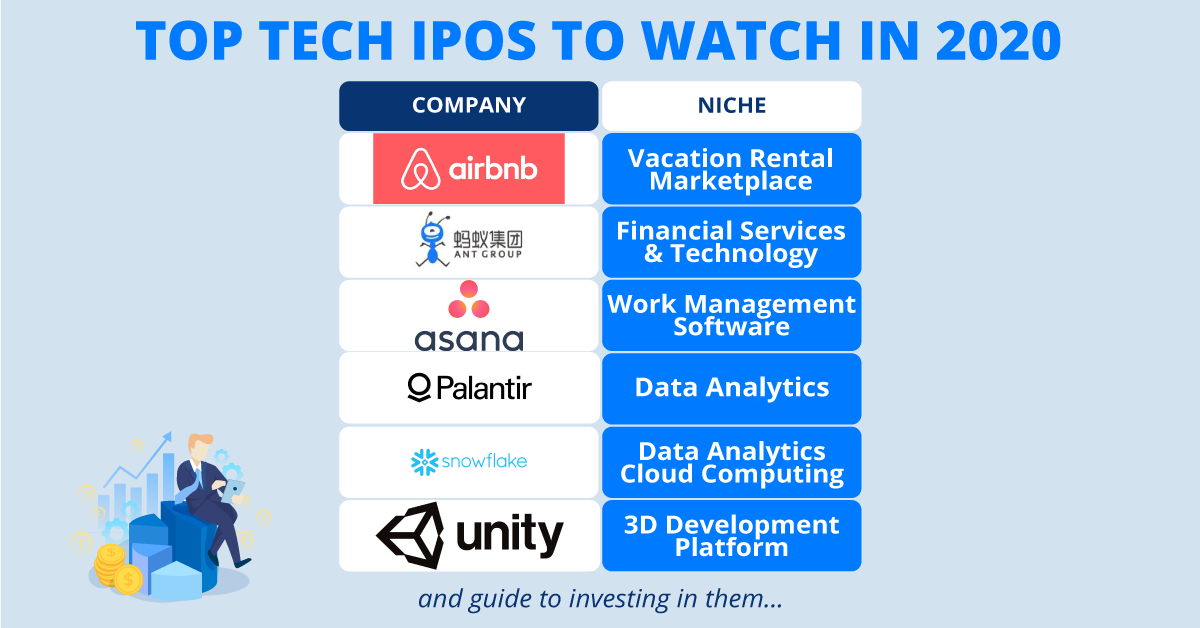 If you do, you’ll be glad to know that there are parties in the world of stock investing as well. I am talking about initial public offerings or IPOs for short.

For the uninitiated, an IPO is the process where a private company offers its shares to the public for the very first time. Once the company become listed, its shares are traded on the stock market. 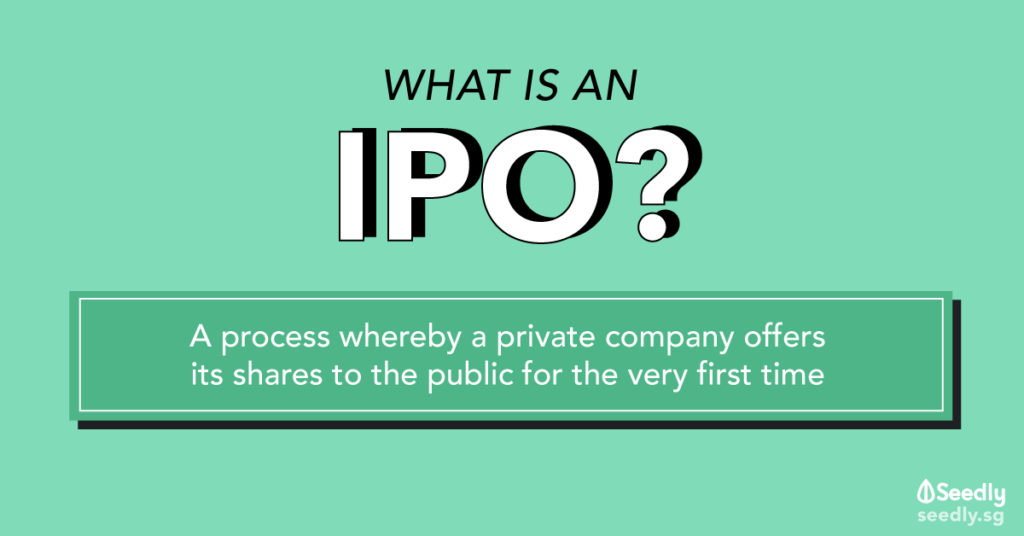 In a sense, IPOs are kind of like a launch party of sorts, where companies invite investors to invest in them.

But, just like how the COVID-19 pandemic caused many parties to be postponed in the first half of 2020, many potential IPOs were postponed as well. It was not until the second half of the year that IPO activity started picking up. We are seeing a new crop of IPOs as the stock markets recover.

Here are 6 of the most hotly-anticipated tech IPOs that are happening sometime this year.

First up we have Airbnb, a tech company that revolutionalised the way we holiday.

The company, which was founded in 2008 by Brian Chesky, Nathan Blecharczyk and Joe Gebbia in 2008, is a unicorn that’s part of the “sharing economy”.

The company’s core business is its vacation rental online marketplace offering lodging (mostly homestays) or tourism experiences. Airbnb acts as a broker between the hosts and guests, earning money by collecting commissions for its role as a middleman.

As such, the company does not actually own the real listings on its platform.

On 19 August 2020, Airbnb announced that it had submitted a confidential draft registration on Form S-1 to the US Securities and Exchange Commission (SEC) with regards to its proposed IPO.

FYI: Form S-1 is a filing used by companies planning to list on the US stock market it also includes a company’s prospectus.

This suggests that a 2020 IPO is still a possibility, although the number of shares to be offered and the price range have not been determined yet.

Airbnb by the Numbers

Currently, Airbnb is privately valued at US$31 billion. But the company has seen better days.

In Q2 2020, the company reported a loss of $400 million on its earnings before interest, taxes, depreciation, and amortization; up 17.3 per cent from the previous quarter.

For more information, check out our coverage of Airbnb’s IPO!

The Hangzhou based company is set to list its shares in a dual offering on the SEHK and the Shanghai stock exchange’s STAR market: China’s answer to the NASDAQ.

Also, the company is also expected to sell about 10 per cent of its shares in the IPO

Ant Group’s IPO could come as soon as October, although the number of shares to be offered and the price range yet to be confirmed.

The company’s main business is its Alipay app which has a little over 1 billion active annual users and a staggering 711 million monthly active users in mainland China and around the world.

For more information, check out our coverage of Ant Group’s IPO.

Next up with have Asana Inc., a software as a service (SaaS) company that develops workplace collaboration and planning software.

The company was founded back in 2008 by Facebook co-founder Dustin Moskovitz and ex-Google and ex-Facebook software engineer Justin Rosenstein.

On 24 Aug 2020, the company filed for a direct listing IPO on the New York Stock Exchange (NYSE) by submitting its Form S-1 to the SEC.

This form of IPO is rather unique as the company will not raise any capital in the move. Instead, the company’s current shareholders like their Venture Capital (VC) and/or employees will sell their shares directly to the public when trading starts.

This is unlike the traditional IPO where there is a middleman (usually investment banks) that handle the whole IPO process. By doing this Asana is cutting out the middleman and saving on fees.

Most notably, other tech companies like Slack and Spotify went down the direct listing IPO route, with Palantir looking to join them as well.

Currently, Asana is valued at US$1.5 billion in November 2018 by Pitchbook and has raised US$$213.5 million in funding so far.

But, the company has been making a loss since its inception in 2008.

On balance, for SaaS companies, how the economics works is that there will usually be high upfront costs for research and development and acquiring customers. Once they hit critical mass, the costs would go down fast if the company is able to capitalise on the lifetime value of its customers well.

Speaking of direct listing IPOs, Palantir Technologies is also going public via the same route, having submitted its Form S-1 to the SEC on 25 August 2020.

The company was founded back in 2003 by Peter Thiel, Nathan Gettings, Joe Lonsdale, Stephen Cohen, and Alex Karp is headquartered in Denver, Colarado.

Over the years, the company has diversified and now offers big-data analysis enterprise software for corporate clients as well.

In other words, they are a SaaS company that sells its data analytics platform for government and enterprise.

Palantir by the Numbers

Palantir is valued at US$20 billion by its VC investors. The company has also received about US$3 billion in funding.

Bloomberg has reported that for the first time in its 16 year history, Palantir is set to break even and generate US$1 billion in revenue this year. The company also managed to grow its revenue by 24 per cent to US$739 million in 2019, according to its Form S1 filing.

But, there are still concerns about the company, as it has yet to turn a profit 16 years in. 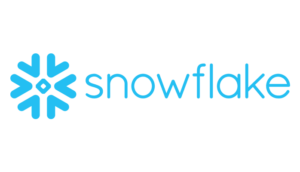 On an unrelated note, did you know that majority of the world’s fresh water supply is in ice and snow?

This leads me to the next company on this list: Snowflake Inc. The company is a cloud-based data-warehousing startup that offers cloud-based data storage and analytics services based in San Mateo, California.

Snowflake was started back in 2012 by data architects Marcin Zukowski, Benoit Dageville Marcin and Thierry Cruanes. Cruanes and Dageville are experts in this field, as they used to work for Oracle Corporation.

With its Data Cloud ecosystem and platform, the company enables its customers to store all kinds of data from different sources in the cloud. In addition, it offers companies the ability to analyze such data and to easily access and share it from everywhere at all times.

On 24 August 2020 Snowflake filed for a public listing with the SEC, opting for a traditional underwritten IPO.

Snowflake by the Numbers

The company’s financials are impressive as their revenue is experiencing a 121 per cent year on year growth in Q2 2020.

What’s more impressive is their revenue retention rate of 158%, a testament to their usage-based pricing model.

According to CNBC, Snowflake is currently valued at US$12.4 billion.

Last but not least we have Unity Technologies Inc, a Danish-American video game software development company based in San Fransico.

The company was founded back in 2004 in Copenhagen, as Over the Edge Entertainment by David Helgason (CEO), Nicholas Francis (CCO), and Joachim Ante (CTO).

Creators, ranging from game developers to artists, architects, automotive designers, filmmakers, and others, use Unity to make their content come to life.

On 24 August 2020 Unity filed for a public listing with the SEC, opting for a traditional underwritten IPO.

The company’s technology is popular as according to Unity, a little over half of all the top 1,000 games in the App Store and Google’s Play Store were built with Unity. The company also counts EA, Microsoft, Niantic, Sony, Tencent and Zynga as its customers.

On top of offering a platform for game development, Unity also generates revenue from a service that helps companies operate and monetise their content.

Unity by the Numbers

As of today, the company is still not profitable. But, the situation is improving.

Guide to Investing in IPOs

Now that you are up to speed about the hottest IPOs in 2020, here is a quick guide on how to invest in them and what you need to consider.

Risks of Investing in IPOs

When it comes to investing in IPOs, here are some thing you need to consider as outlined in our guide to IPOs. 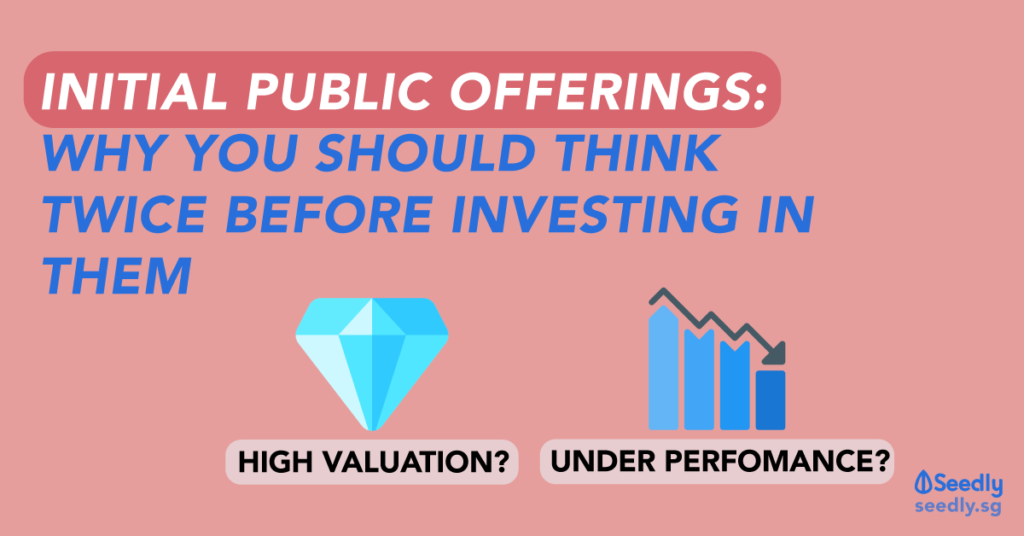 To help you with the research process, we also have a guide to evaluating IPO prospectus that provides information on what to look out for in an IPO. 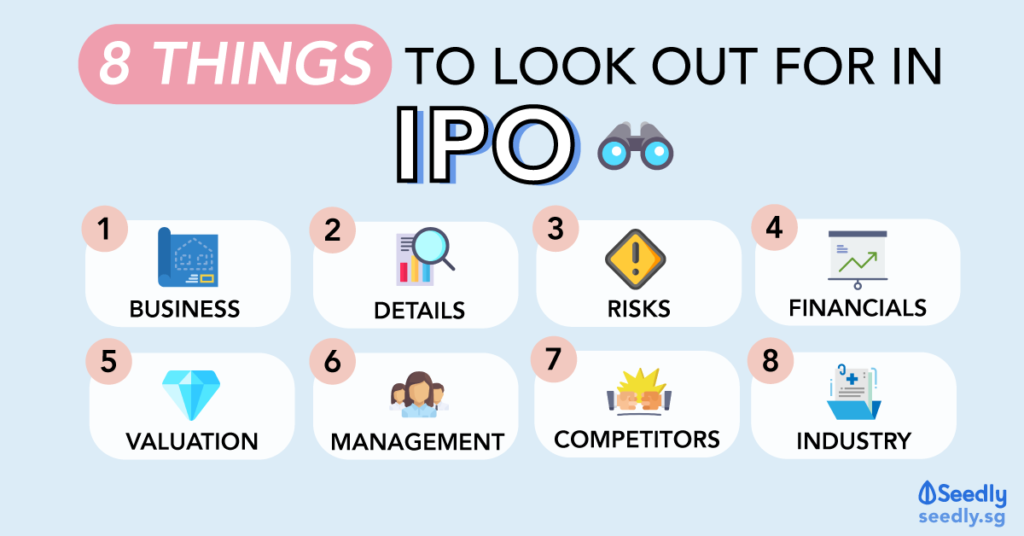 Now that you have done your research, here is a quick overview of the IPO process from a retail investor’s perspective.

In a sense, IPOs are kind of like a launch party of sorts, where companies invite investors to invest in them for the first time.

There are also companies that do a direct listing IPO. This is where they skip the whole underwriting process and sell the shares directly to the public when the stock begins to trade.

Not to mention the Dutch auction IPO where IPO prices are not set. Instead, companies invite investors to bid for their shares and the bidder with the highest bid gets allocated the shares.

For traditional underwritten IPOs the process will typically play out like this:

Once the target price has been set and the IPO date confirmed, the shares will be offered in an initial offering.

Typically, most retail investors are not able to purchase the shares at the initial offerings.

The sales of these shares in the initial offering are completed before the actual IPO day itself.

After the initial offering, the stocks will be traded on the open stock market at a price determined by market forces. This is where most retail investors can jump in to invest in the IPO by buying the stocks via their brokerage account.

As such, the price you pay for a stock when it hits the open market can be vastly different from the initial offering price.

Initially, there will be quite a bit of volatility surrounding IPO shares when it first becomes publicly traded. This might be due to opening day ‘hype’, investors flipping the shares and external forces affecting the stock market at that time.

Some IPO stocks’ prices might soar in value while others might do poorly and drop below the IPO price.

Thus, we would recommend a wait-and-see approach when it comes to IPO investing.

If investors really wish to invest in an IPO, they should understand the business thoroughly and analyse whether the valuation of the IPO makes sense before applying for it.

What Are Your Thoughts on IPO Investing? 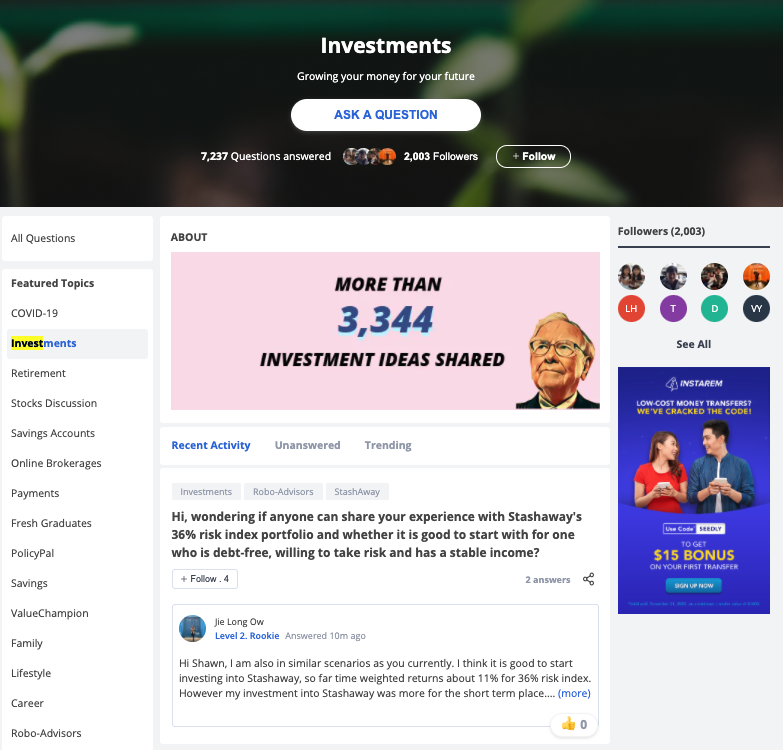