Why Is The Salary Of Singapore's Prime Minister So High? 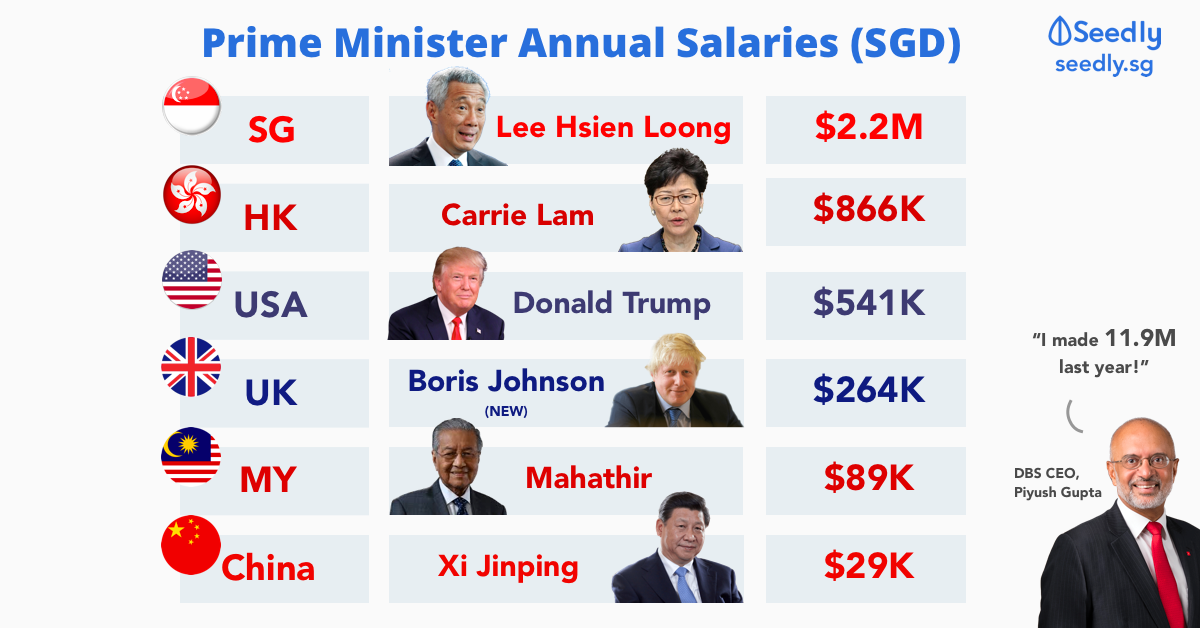 Why Is The Salary Of Singapore's Prime Minister So High?

And considering that it is our Bicentennial Year, we thought it might be interesting to revisit the growth we’ve accomplished since achieving Independence in 1965 and to address a commonly debated topic by most Singaporeans as well.

In this article, we’ll be presenting the facts, figures, and statistics of Singapore, one of the world’s fastest-growing economies vs the economies of five other countries.

Using that data, we’ll also be comparing the compensation package of Singapore’s leader vs. that of the leaders from the five selected countries to find out if Singapore’s Prime Minister is really overpaid or not.

Disclaimer: We have no political affiliations and just want to put to rest the rumours and questions that are swirling around the internet through good ol’ fashion research and the use of facts and figures from official sources.

TL;DR: A Top-Performing CEO Should Command Top-Dollar For His Or Her Work Here are the other five countries which we selected for this comparison.

You’ll notice that they range from local neighbours to Asian rivals, to global benchmarks:

“If you pay peanuts, do you get monkeys?”

And here are the leaders of the various countries we selected, whose salaries we listed:

If you’re curious as to where we got the salaries from, they can be easily found on the country’s respective government websites (SG, MY, HK, China, USA, UK) as well as through various official news sources.

For the sake of this comparison, all annual salaries were converted to SGD$ at exchange rates which are correct as of 24 July 2019.

And just to give you a better feel of the scale of responsibility of each leader, we chose the following variables:

Note: the variables are pegged to the position and not necessarily the current leader who is the incumbent

What: GDP per capita is product divided by mid-year population. GDP is the sum of gross value added by all resident producers in the economy plus any product taxes and minus any subsidies not included in the value of the products. Data are in current U.S. dollars.

Why: It gives a good indication of how the economies have been growing by taking the overall economy value that has been created by the country over it’s population figures.

Findings: Singapore’s GDP per capita is ranked top 3 in the world, which is a massive feat, surging ahead many other countries since independence.

What: Midyear estimates of the resident population.

Findings: For sake of the graph visualisation below, I have removed China (1.3 Billion) and USA (325 Million) so you can observe the differences between the other 4 countries. It is pretty obvious that Singapore (5.6 Million) has the smallest population, even compared with Hong Kong (7.4 Million). This indicates a smaller population and taxpayer base.

However, it is noted that we are the second fastest-growing population if you measure by growth % at over 3.4 times over the last 50 odd years.

LKY: Higher Pay Will Attract A Talented Team So The Country Can Prosper

In 1994 LKY shared a now-famous parliament speech on Minister salaries which rings true till today. Here is the gist of it:

“Sir, my generation of political leaders have become dinosaurs, an extinct breed of men who went into politics because of the passion of their convictions.

Let me explain very simply, Mr Speaker, that MPs are real men and women, just like you and me, with real families who have real aspirations in life. So when we talk of all these highfalutin, noble, lofty causes, remember at the end of the day, very few people become priests.”

How Is A Singapore Minister’s Salary Calculated?

As with any organisation or Multinational Corporation (MNC), the Salary structure of Ministers are modelled closely.

There is actually a 50 page white paper by the Public Service Division (PSD) detailing the full rationale of the compensation packages.

A Singapore Minister’s salary is made up of a fixed component and a variable one.

However, for the Prime Minister, he does not receive a Performance bonus because there is no one to assess his performance annually. Instead, the PM’s salary is tied to twice the MR4 minister’s salary = 1.1M x 2

In fact, after some debates, there was a revision in salaries from 2010, which was also detailed here.

The breakdown can be seen via this chart below. 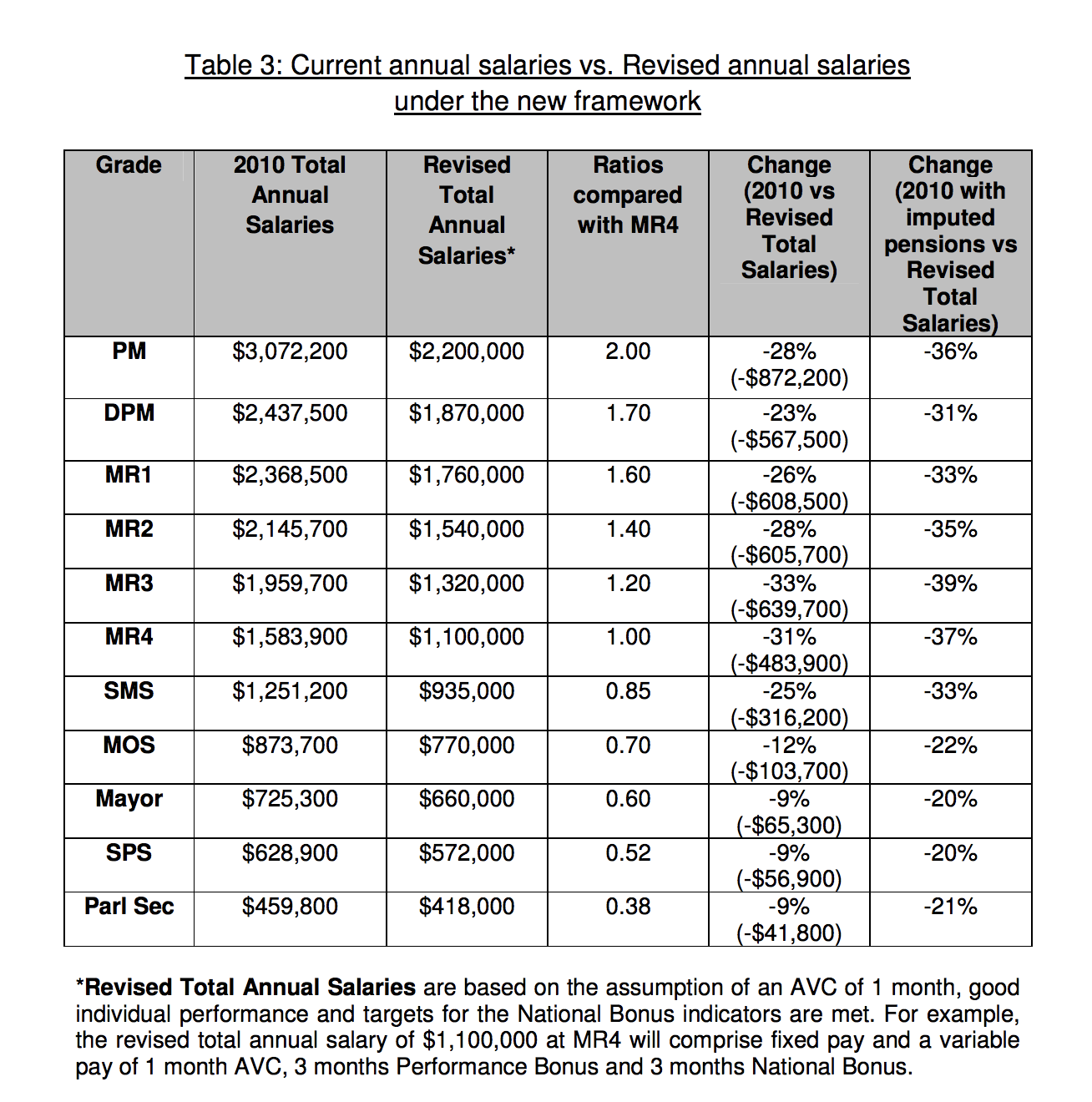 Conclusion: Singapore Needs The Best Talents To Run The Ship

Another common phrase that is being thrown around is the idea that Singapore is in fact not just another country. For any country to showcase abnormal growth, it has to be structured in an abnormal way. Hence, the idea of Singapore Inc.

If we compare PM Lee Hsien Loong’s salary to other leaders around the world, it is clear that he is earning more.

However, in comparison with other top CEOs of Fortune 500 companies, local banks, and STI companies, he’s only earning a fraction of their annual packages. For example, DBS CEO Piyush Gupta earned $11.9M in 2018, and CityDev CEO Kwek Leng Beng and UOB CEO Wee Ee Cheong are both tied at $8.9M each.

Singapore Inc, should continually hire the best talent and leaders, and reward them accordingly. Especially if the country is to continually outperform it’s peers in the global landscape.