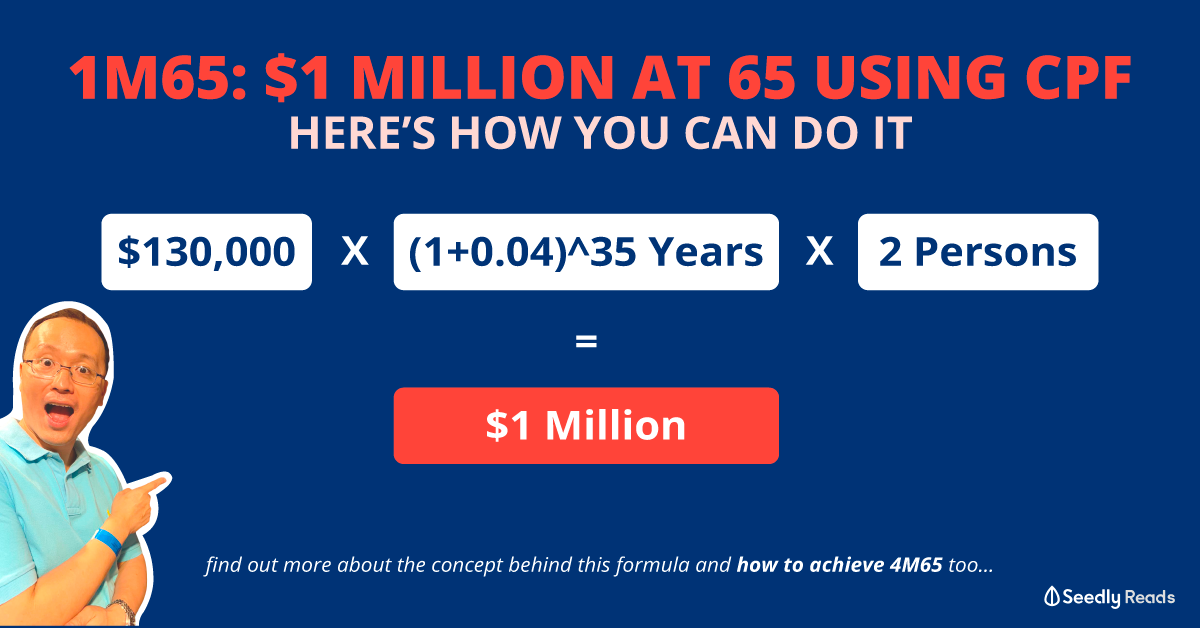 Singaporeans have a love-hate relationship with their Central Provident Fund (CPF).

If you’re wondering what it is, it’s basically a social security system that is meant to be a retirement savings plan.

Think of it as a safety net of sorts which locks your money up till a certain age.

But what if you could use it to get rich?

We’re gonna show you how.

The concept behind 1M65, as coined by our SeedlyCommunity member, Loo Cheng Chuan, is really straightforward.

At around 30 years old, both you and your spouse should each have at least $130,000 in your CPF Special Account (SA) and MediSave Account (MA) combined.

The prevailing interest rate of 4 per cent compounded over time will grow both of your combined CPF balances to $1 million by 65 years old.

For math enthusiasts, the 1M65 concept can be distilled into this very simple formula:

If you’re interested to learn more, we had Loo on a recent SeedlyTV episode to explain how he used his CPF to build his retirement portfolio. 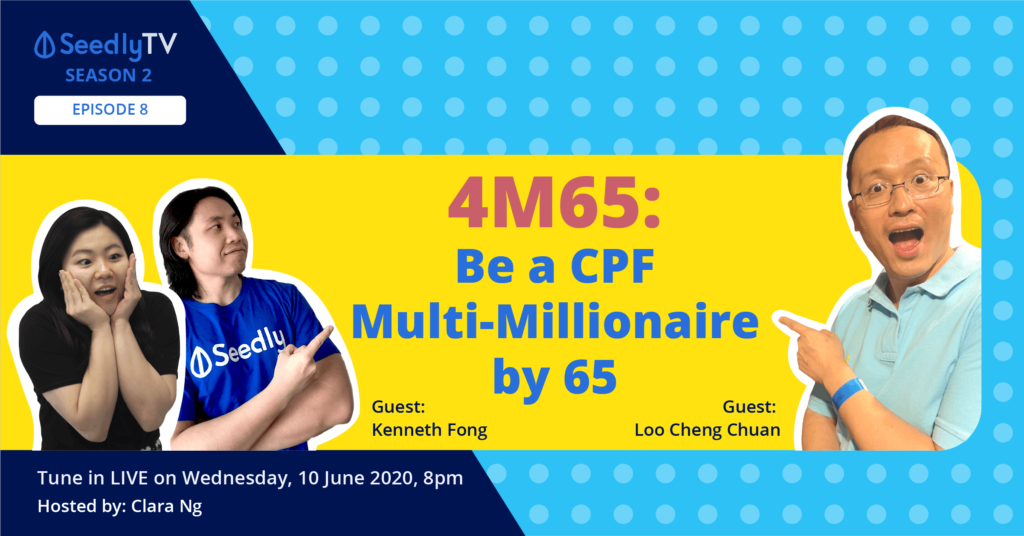 Oh, he’s actively answering our SeedlyCommunity’s questions on our platform too.

So if you’ve got questions, be sure to drop it there!

1M65 is based on the concept of compound interest. 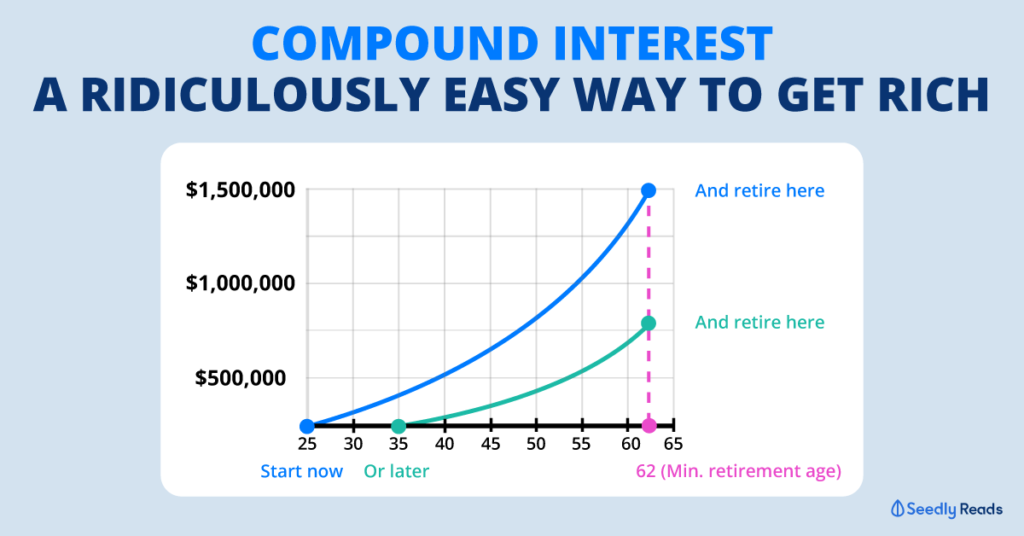 The earlier you start, the faster your money grows.

And here’s what the breakdown looks like for the amounts going into the various CPF accounts:

Note: depending on your age and account balance, the actual interest rates are between 2.5 to 3.5 per cent for OA, and between 4 to 6 per cent for SA and MA

The average Singaporean adult would start work at around 23 years old (aside: for guys and poly grads, it’ll be a little later).

Here’s how much you would have in your CPF account after 7 years:

Let’s say you want to earn that 4 per cent p.a. interest, and decided to transfer all of your OA balance into your SA.

It seems like achieving $1 million by 65 years old is totally possible, bruv.

In fact, Loo and his wife crossed the $1 million mark together at 45 years old, 15 years after they started their 1M65 journey.

FYI: this is possible because Loo and his wife are bringing in more than the median income

If we stretch this to 65 years old and assume:

They’re looking at a retirement fund that is worth $3.2 million.

Their projected retirement fund will be worth $3.8 million.

Hitting $1 million (or more) is possible assuming you don’t use your CPF monies at all (more on this in a bit).

4M65: Because Who Wouldn’t Want More?

You would’ve noticed that Loo is very close to $4 million.

The man has figured out a way to get there… and BEYOND.

As of January 2020, the Loos are 48 years old and have $1.35 million in their combined CPF balances and CPFIS investments.

Loo shared that if:

Their projected total CPF balance at 65 years old is an eye-watering $5.2 million.

The thing about 1M65 or 4M65 is that it sounds simple enough.

You just need to keep working, don’t touch your CPF, and will have to commit to making significant top-ups to your CPF-SA and MA in your 20s and 30s.

But there’s more to it too.

Here are some advantages and disadvantage of following through with 1M65.

The Advantages of Making Top Ups to Your CPF 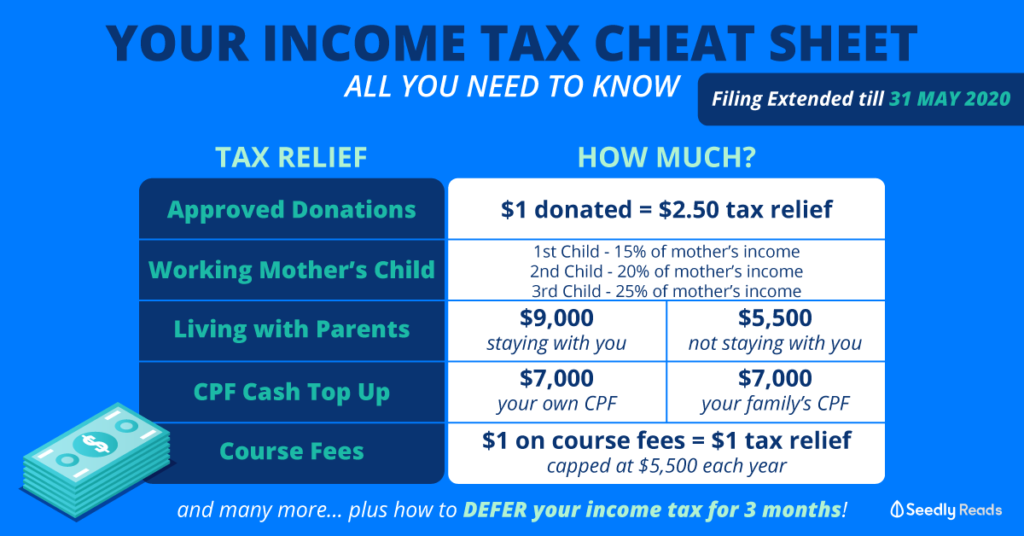 Besides building up your CPF balance and enjoying the 4 per cent interest in your CPF-SA.

You can also enjoy tax relief on your taxable income.

Assuming you max out your contributions through the Retirement Sum Topping-Up Scheme.

The tax reliefs you get could put you in a lower tax bracket (read: pay lesser tax).

Your CPF Special Account yields a floor interest of 4 per cent per annum.

Or the 12-month average yield of a 10-year Singapore Government Securities bonds plus 1 per cent — whichever is higher.

In comparison, current fixed deposit rates are nowhere near the 2 per cent mark.

And leaving your money in your bank earns you a measly 0.05 per cent interest p.a.

Yes, there are high-interest savings accounts which promises a high interest rate.

But they’re subjected to changes anytime.

As compared to mutual funds or equities which are subjected to the mercy of the stock market and investor sentiment.

This means that that your CPF savings are safe, regardless of the financial market condition.

The Disadvantages of Making Top Ups to Your CPF

1) There Are a Lot of Restrictions to Your CPF Monies

You cannot touch the money in your CPF till you’re at least 55 years old.

And even then, that’s provided you meet the Full Retirement Sum. 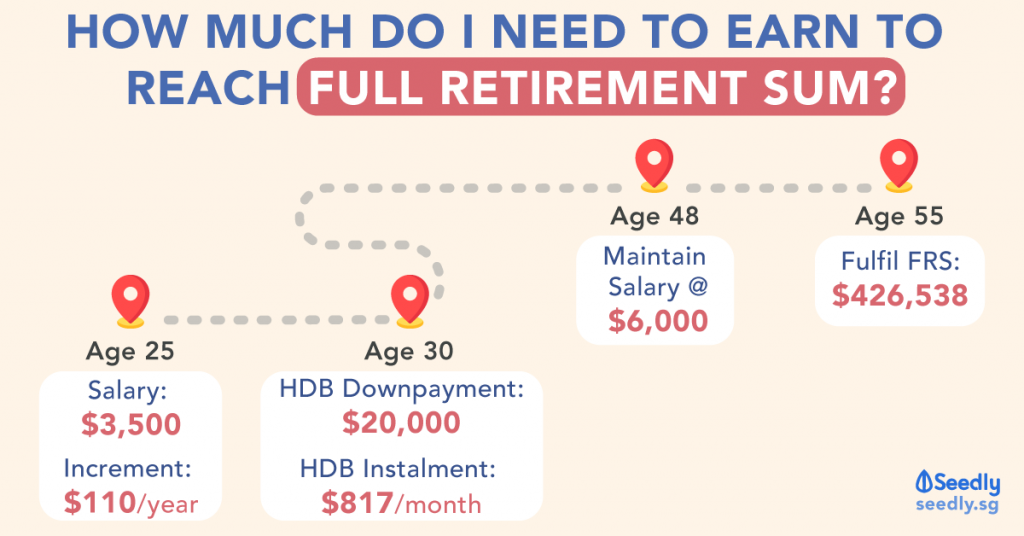 Or 65 years old under the CPF LIFE scheme. 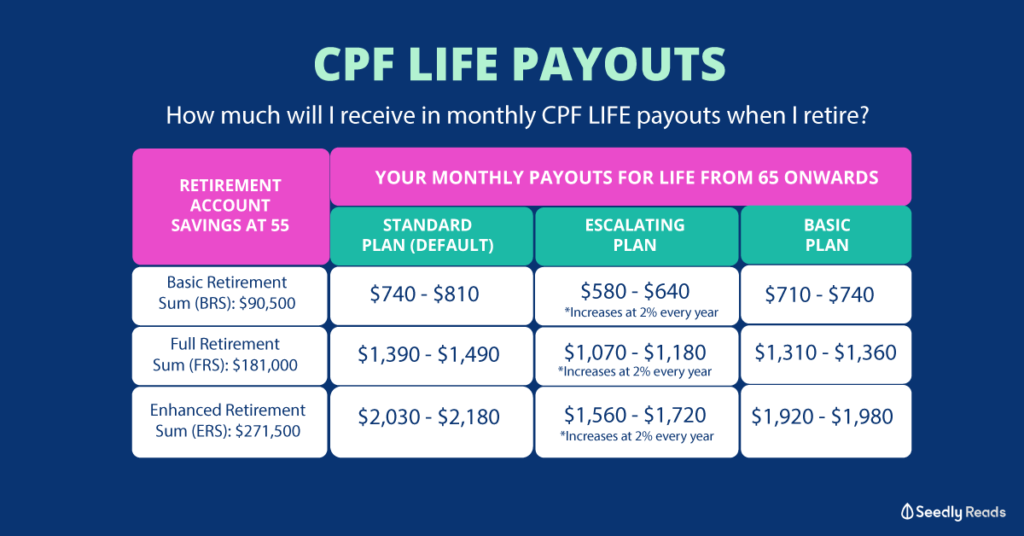 Which means that whatever money you put into your CPF-SA cannot be used to pay for stuff like:

Your CPF is really for retirement purposes.

2) The Transfer is Irreversible

Transferring your cash into your CPF accounts is irreversible.

Transferring your CPF-OA balance into your CPF-SA is also irreversible.

In fact, before you even do this.

There are blaring signs everywhere that remind you that you should evaluate your decision carefully before doing so.

Because you might not have the liquidity when you need it the most.

I would argue that the concept of 1M65 and CPF funds a fixed retirement milestone.

Meaning you have to live long enough to retire a millionaire.

And not 1M(insert whatever age you would like to retire).

But CPF recommends us to delay it till 70 years old — when CPF LIFE kicks in — in order to enjoy higher payouts.

This is also where a lot of people have difficulty believing that they’ll ever see their CPF money.

Remember during the 2019 NDP Rally, when Prime Minister Lee Hsien Loong unveiled plans to raise the official retirement age from 62 to 65 by 2030?

Who’s to say that the CPF Payout Eligibility Age won’t be raised too?

So what if instead of locking up that money, you take that cash flow to generate financial assets that might potentially help you retire earlier?

If you’re a financially-savvy individual, you could:

How many of us can be the next Mark Zuckerberg?

And how many of us can continuously beat the market year after year till we’re 65?

Before you think about topping up your CPF or investing your CPF monies.

It’s probably a good idea to make sure that you have emergency funds on hand.

The COVID-19 pandemic is a great example of why this is important.

And many jobs were lost.

If you or your spouse lost your jobs, the cash flow for your family will be severely affected while you still have to pay for basics like:

You may be CPF rich, but being cash-poor will really suck.

Here at Seedly, we always preach that when it comes to any kind of financial instrument.

Or as long as your money is involved.

You’ll want to do your due diligence and understand exactly WHY are you doing it.

As Loo mentioned during the SeedlyTV episode, “1M65 is a way to get rich!”

And what I hear him saying, is this:

“Think of 1M65 as a building a safety net for your retirement. Once you have that down, you can make better investment decisions and take calculated risks.”

Got questions about how 1M65 can help you on your personal finance journey?

You know where to go.