Disney Plus Singapore: Is it Worth it?
317
shares 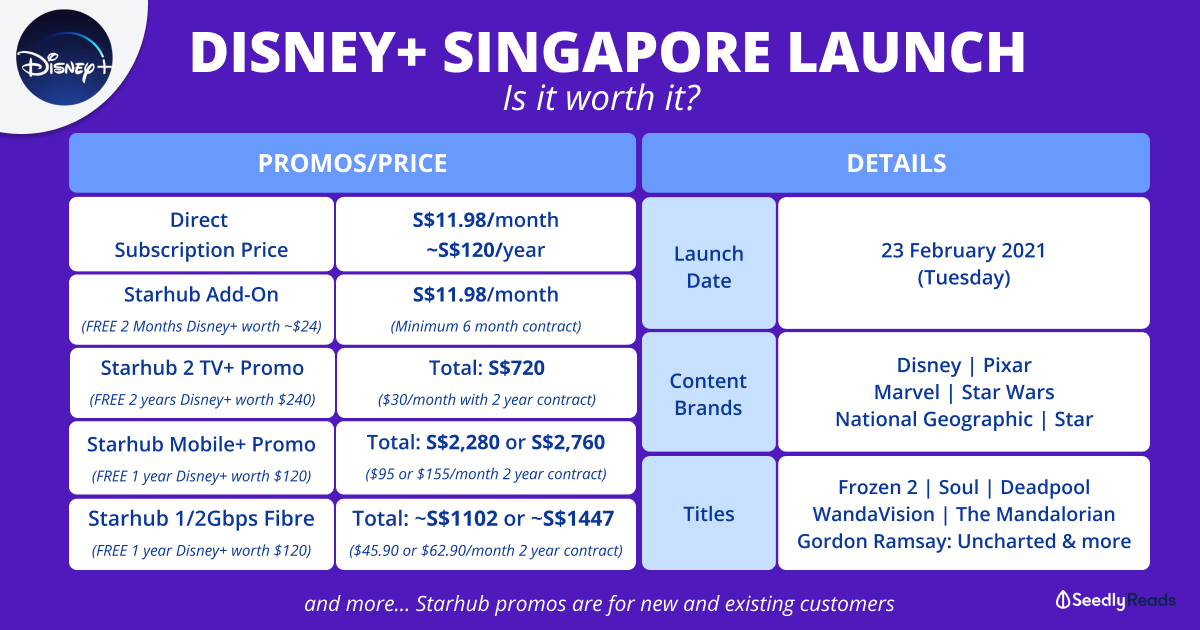 In December last year, the Walt Disney Company (NYSE: DIS) announced that it will be launching its Disney+ streaming service in Singapore, starting today (23 Feb 2021).

Starting from a subscription price of just S$11.98 a month or S$119.98 a year (~S$10 a month), you will be able to stream over 650 movies and 15,000 episodes of content from Disney’s vast content library as well as its new exclusive Disney originals. Plus, you can even get it for ‘free’ with some StarHub promotions.

Disney+ Subscribers will be able to catch content from these content brands owned by the company, which include:

Also included in the subscription is content from Star, Disney’s international answer to Hulu.

Star which is catered to older teens and adults, will carry a number of titles from the company’s other non-main franchise brands like FX and 20th Century.

This means you will be able to stream hit TV series like Atlanta, How I Met Your Mother, Family Guy and movies like Deadpool and Logan.

Here is all you need to know about the launch of Disney+ in Singapore!

TL;DR: All You Need to Know About Disney Plus Singapore

What Is Disney Plus?

Disney+ (pronounced Disney Plus) is an up and coming video streaming service, owned by gigantic media conglomerate the Walt Disney Company.

And as you’ve guessed it, Disney+ will be competing with other video streaming services such as Apple TV+ Amazon Prime Video, Netflix, and HBO Go.

Each subscription will allow you to stream Disney+ concurrently on four different devices.

You will also get to enjoy unlimited content downloads on up to 10 devices and create up to seven different user profiles; each with their own personalised recommendations.

There will be parental controls on Disney+ that allow you to set up kids profiles that allow only age-appropriate content and positive opt-ins.

There’s even a GroupWatch feature (thing Netflix watch party), that will let you watch Disney+ show with your friends and family together online.

As mentioned above, Disney+ will be launching in Singapore from today (23 Feb 2021).

To entice Singapore users onboard, Disney will charge just S$11.98 a month for the Disney+ streaming service in Singapore.

In addition, the company is offering subscribers who commit longer to a discount, as it costs just S$119.98 for a year-long subscription to Disney+ (~S$10 a month).

The Walt Disney Company told The Straits Times that in line with the Disney+ subscriber agreement, it does not allow users to access Disney+ using a virtual private network – to bypass geographical restrictions – in a territory where the service is not yet live.

There are ways around it but since Disney+ is officially coming to Singapore, you might want to reconsider and not take the risk.

What Will Disney Plus Offer To Consumers in Singapore?

It goes without saying that a streaming service is nothing without its content.

Since Disney has acquired so many different companies and production houses, here’s a preview of what to expect from the streaming service.

Subscribers will be able to catch some of Disney’s animated classics, and fan favourites, like The Lion King, Aladdin, Beauty and the Beast as well as their live-action remakes.

This includes the recently released Lady And The Tramp live-action remake too.

You will also be able to catch some of Disney’s more current animated hits like Big Hero 6, Frozen 2 and more.

In an interview with Variety, Disney producer Osnat Shurer confirmed that Raya And The Last Dragon a movie with strong Asian cultural undertones will be released on Disney+ on 5 Mar 2021 – the same day that the movie is released in local theatres.

Not forgetting the animated classics from Pixar that we grew up with.

This includes the likes of The Incredibles series, Finding Nemo, the Toy Story franchise, Monsters Inc. and modern offerings like Inside Out and Coco.

And of course, our favourite superheroes from the Marvel Cinematic Universe (MCU) that are slowly making their way from the cinemas to TV.

Not forgetting the upcoming Marvel TV shows like The Falcon and The Winter Soldier (19 Mar 2021 release), Loki and more.

Fans of Star Wars rejoice as you will be able to catch all two seasons of the Disney+ original The Mandalorian.

Not to mention all nine Star Wars movies including:

You will also get to enjoy The Mandalorian spin-off series The Book of Boba Fett on Disney+ when it is released in December 2021.

Fans of National Geographic. you are not forgotten. Your documentaries will be included too.

On top of documentaries, you get National Geographic branded shows like The Right Stuff: a historical drama about the United States’ space program and Gordon Ramsay Uncharted: a television series that follows the foul-mouthed chef across exotic locales like Laos, Peru, Guyana and more.

Disney also has something for a more mature audience.

If you subscribe to Disney+, you will get access to Star which has movies and TV shows from studios like Touchstone, FX, 20th Century Studios and 20th Television.

On Star, you will be able to stream movies like the Deadpool franchise, Logan as well as hit TV series like Atlanta, Gray’s Anatomy, How I Met Your Mother, Family Guy and more.

But parents fret not! You can password protect titles with mature age ratings on Disney+ to prevent your children from watching content that is not suitable for them.

Other Things To Note

If you still remember High School Musical (who doesn’t!) they will be on Disney+ too, together with other beloved Disney Channel series.

Programs from FOX, like The Simpsons will also be on Disney+ as well.

If you would like to know what other titles are on Disney+, CNET has a list of titles that Disney has confirmed.

Are Disney Movies on Netflix?

Unfortunately, Disney is slowly removing its content library from other streaming services Netflix.

But for now, you still can catch movies like The Muppets (2011), The Princess and the Frog (2009), Chicken Little etc. on Netflix.

In fact, this shouldn’t come as a surprise as the more perceptive binge-watchers and investors will have noted that Disney has been holding back their releases on platforms like Netflix.

But compared to HBO GO and Netflix, Disney+ is still quite competitive as it is priced the same as Netflix’s streaming service and is slightly cheaper than HBO GO.

For a more thorough comparison, you might want to check out our piece comparing some of the best streaming services in Singapore. 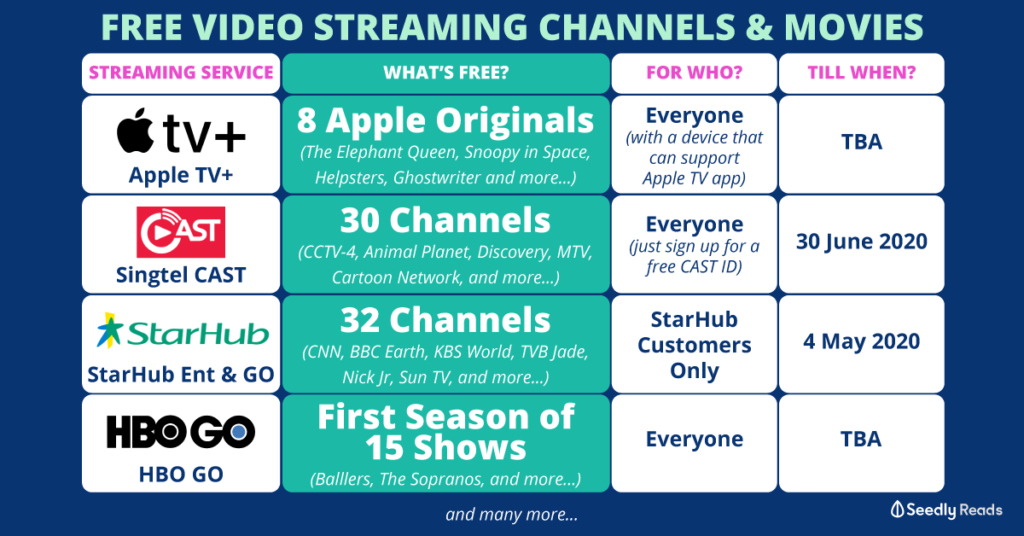 Disney+ will be released in Singapore starting today (23 Feb 2021).

Alternatively, StarHub is offering some promotions.

StarHub is the official distributor of Disney+ in Singapore, with its mobile, TV and broadband offerings, having signed an exclusive agreement with The Walt Disney Company.

Existing and new StarHub customers who subscribe to any of these plans will get to enjoy these Disney+ promotional offers for ‘free’:

*Do note that for all the Starhub Disney+ promos, your Disney+ access with StarHub will be terminated after you terminate your TV+, Fibre Broadband or Mobile+ subscriptions with Starhub.

But, you may still subscribe to Disney+ directly to continue enjoying the service.

Unfortunately, your Disney+ access with StarHub will be terminated as well. You may subscribe to Disney+ directly to continue enjoying the service.

“For decades, the Disney Group has been entertaining the world with long-lasting valuable content. Disney+ platform is being built on that foundation, one that no other content or technology company can rival.” (Ahem, Netflix?)  — Bob Iger, Chairman and CEO

It appears that the streaming wars are well and truly starting in Singapore.

Sadly, it seems like Cable TV all over again.

What Are Your Thoughts on Disney as a Company? 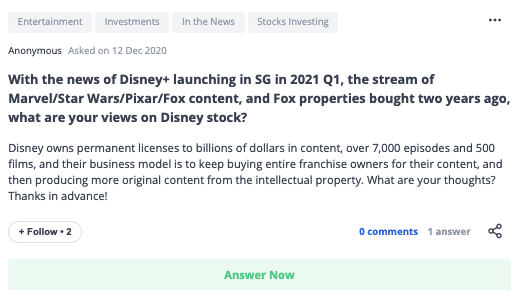