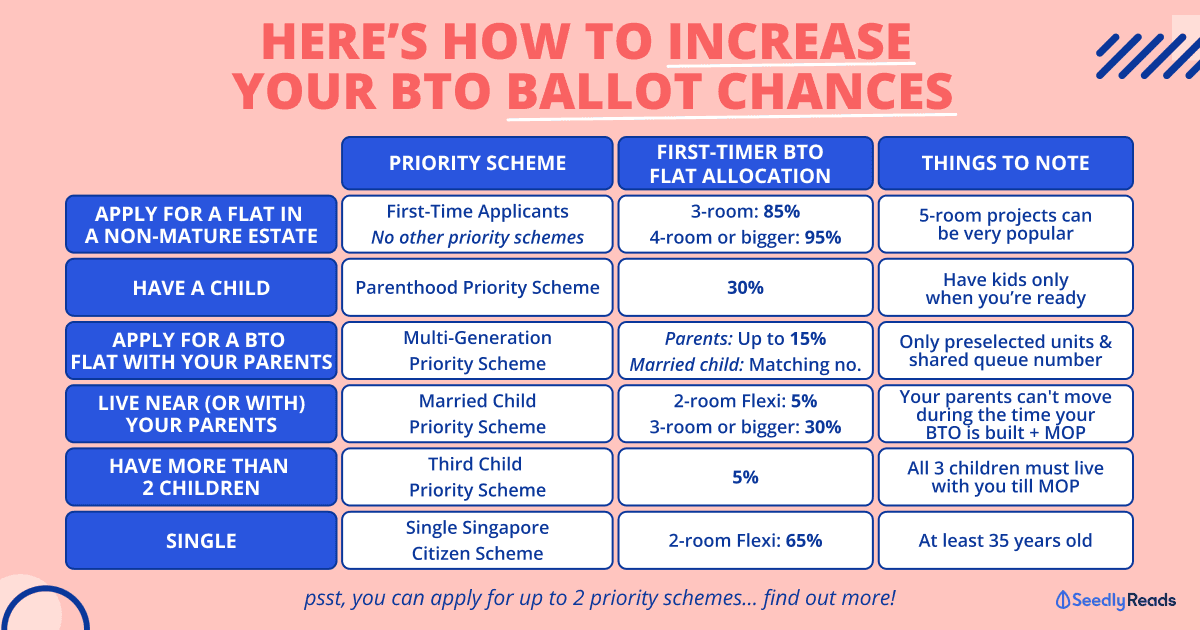 Been applying for Housing Development Board’s (HDB) BTO flats but you’re always out of the queue?

I feel you, bruh.

Take the latest May 2022 HDB BTO Launch with 5,330 new units, almost everything was oversubscribed.

But, it’s not all too gloomy!

HDB just announced that more flats will be allocated to families and singles applying for the first time from the August 2022 HDB BTO launch!

So, it’s not too late to increase your chances of a successful HDB BTO ballot!

TL;DR: How To Improve My HDB BTO Ballot Chances

There are various HDB Priority Schemes to improve your BTO ballot chance.

Basically, if you’re an average, young, Singaporean couple or family looking to improve your BTO ballot chances. You may apply for up to 2 priority schemes if you are able to meet the eligibility conditions.

You’re not allowed to apply for two BTOs at the same time.

I’m gonna keep it real here so that you can make a proper and informed decision:

The application rate gives you an indication of the number of people vying for a unit.

To calculate, the formula is Application rate = Number of applications received / Number of units available

This largely depends on the demand and supply of flats, which just looking at past launches, demand mostly exceeds supply.

As long as the Ethnic Integration Policy (EIP) racial quota has not been met, you have a chance of securing a flat.

So… How Do I Increase My HDB BTO Ballot Chances?

However, HDB accords priority to first-timers as well as applicants under certain priority schemes by giving them more ballot chances.

For example, first-time applicants are given two ballot chances instead of one.

But if there’s an overwhelming demand for flats, even HDB cannot guarantee you’ll be successful.

If you’re suay and are unsuccessful for two or more BTO applications (as a first-timer) in non-mature estates.

You’ll get one additional chance for every subsequent BTO application in non-mature estates.

If you’re successful on the ballot and are invited to book a flat, don’t just reject it immediately if you see that your ‘ideal’ unit is taken.

For first-timers, rejecting two chances to book a flat means your first-timer priority will be suspended for one year.

FYI: you can still apply for an HDB BTO flat during that 1 year, you just don’t have your first-timer priority.

But if you reject another two more chances to select a flat within that year, your suspension will be extended for another year.

How To Improve My HDB BTO Ballot Chances

If you’re an average, young, Singaporean couple or family looking to improve your BTO ballot chances.

BUT before you decide to have children (or more children) or want to involve your parents in your application, take a minute to review your financial situation and consider the future implications of your decisions.

These schemes only improve your HDB BTO ballot chance…

1) Apply For a Non-Mature Estate

At the risk of sounding obvious, applying for a non-mature estate (read: not as popular) as compared to a mature estate should improve your HDB BTO ballot chance.

Yup, HDB has announced that at least 95% of four-room and larger flat supply in non-mature estates will be set aside for first-time family applicants. This is upped from 85% in previous launches!

For a three-room BTO flat, at least 85% of the quota will be set aside for these families, up from 70% now.

For first-time single applicants, the allocation of non-senior two-room flexi flats in non-mature estates will be upped from 50% to 65%.

However, it also depends on which non-mature estate are you applying to, and the flat type that is being offered.

If you’re expecting or already have a child, your application is prioritised because you obviously need the home more urgently.

The PPS is NOT a good reason to decide to have children just to improve your BTO ballot chances.

In fact, we’ve worked it out before that you’ll need something to the tune of $11,400 before having your first child! 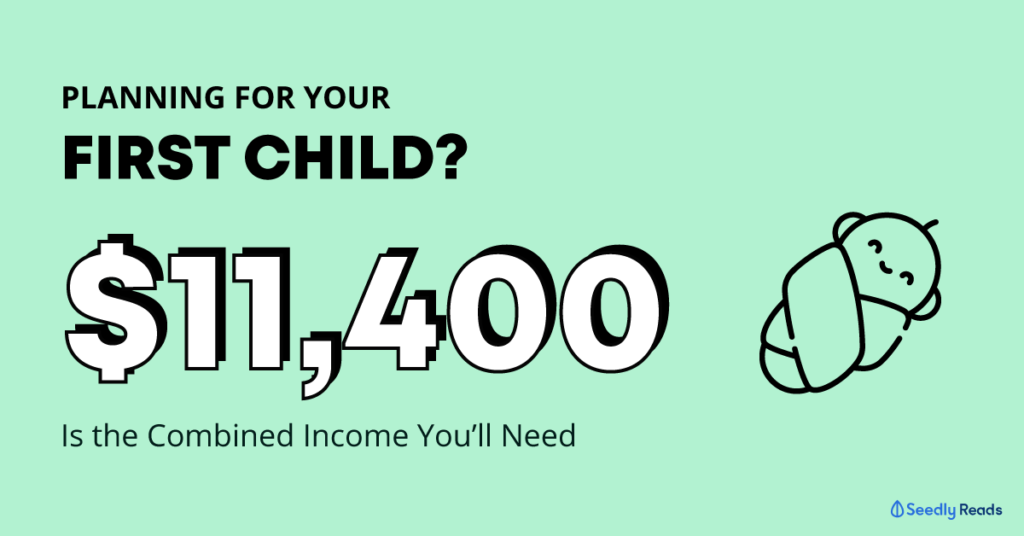 So unless you’re financially and emotionally ready for the commitment.

If your parents are also looking to BTO, then you can both apply to the same BTO project under the Multi-Generation Priority Scheme (MGPS) to increase your ballot chances.

What this means is that you’ll have to make a joint application for two separate flats. This essentially increases the ballot chances of both parties staying within the same precinct and even on the same floor!

This means that the BTO project which both you and your parents decide on must have these unit types.

On top of that, MGPS applicants can only choose from preselected or preidentified units which might be spread across different blocks.

And are probably on both high as well as low floors.

This means that your choice of units will be further limited.

The fact that this is a joint application also means that you and your parents share a queue number.

So every step of the BTO process has to be done together (eg. signing of option, lease agreement and etc.).

In order to do that, you and your parents will need to coordinate closely and agree to be on the same schedule to make this work.

Under the Married Child Priority Scheme (MCPS), you can either choose to live within 4km of your parents OR live with your parents.

Assuming you choose to live within 4km of your parents, they cannot relocate beyond this distance, for the time it takes for your BTO to be built. i.e., they still can move but must be within 4km of where you’ve applied.

Plus the five-year Minimum Occupation Period that you have to fulfil upon collecting the keys to your HDB BTO flat.

So… that’s anywhere between eight to 10 years (depending on how fast your flat is built).

Or they want to sell their flat and move to the Bahamas and enjoy their golden years.

They’re going to have to put that plan on hold for at least eight to 10 years.

You need to have “more than two children”, meaning you must have at least three children to qualify for the Third Child Priority Scheme (TCPS).

Also, your three children must continue living with you for the entire five-year Minimum Occupation Period.

In addition, they must not:

This is not really a problem if all of your kids are really young and rely on you for food, clothing, and shelter.

But if you have children who are ready to leave the nest, then this might be a problem.

What If I Qualify For the Parenthood Priority Scheme (PPS) Too?

Your application will be balloted under the TCPS first.

If you’re unsuccessful, then it’ll be balloted again under the PPS.

6) Apply for a Place With Lower Median Application Rate

For example, if the application rate is 8 for a 4-room BTO flat, this means that there are 8 applicants vying for 1 unit in this project.

You can continue observing the rates until the last day before balloting for one, and this may improve your chances of securing a flat!

Don’t give up yet.

With each subsequent unsuccessful attempt (first timer and with two or more failed attempts), you will get one additional chance for an HDB BTO flat in a non-mature estate.

This is what I mean:

Read that carefully, ya…

This is for non-mature estates only.

Note: An application is considered unsuccessful if you are not invited to book a flat, i.e. you did not receive a queue number, or the flats were all taken up before your queue number was due.

You might wanna consider going the HDB Resale flat route instead.

Sales of Balance flats (SBF) are public housing flats that are under construction (i.e. BTOs), have been built and became leftovers, or repurchased flats by HDB.

Most couples opt for this became of these reasons:

However, information regarding these flats is only made available during the launch itself, which is in May and November every year.

And, this also depends on your luck as you will need to ballot for it.

So, make sure to do your research before deciding on whether you want to get an SBF or BTO. Check Out Housing Grants Before Applying

For first-timer applicants, you should be looking at these housing grants or Central Provident Fund (CPF) Housing Grant minimally:

Second-timer families with young children can access the Fresh Start Housing Grant and Step-Up CPF Housing Grant, and receive guidance from HDB’s Home Ownership Support Team, to help them own a flat.

For public rental households, those who are able and ready to move to homeownership will continue to enjoy priority under the Tenants’ Priority Scheme.

While you’re checking out the housing grants you’re eligible for, remember to also check if the house you’re applying for fits your budget.

After all, you don’t want to end up struggling with the mortgage. With all that said, all the best to you!