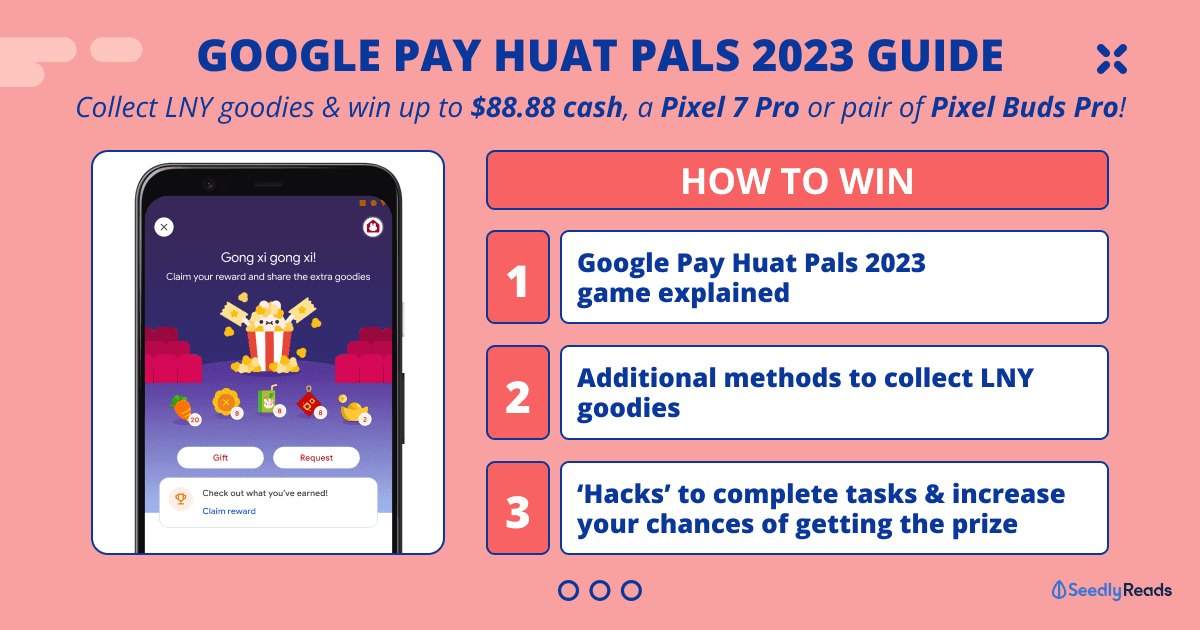 Unlike the previous two editions where you collect Huat Pals such as the elusive and fan-favourite BB Loh, this year’s edition features five goodies to collect for a scratch card worth up to $88.88, a Pixel 7 Pro worth $1,299, or a pair of Pixel Buds Pro worth $299!

TL;DR: Google Pay Huat Pals 2023 Guide — Plus Tips on How To Earn Goodies Disclaimer: This article is not sponsored by Google; we are just informing you about the game, and hopefully, this guide will help you win some cash and prizes.

Instead of collecting Huat Pals for prizes this year, you’ll have to collect five Lunar New Year goodies by performing tasks on the Google Pay mobile app available on iOS and Android.

Once all five goodies are collected, you will be able to win one of three attractive prizes:

The game’s mechanics are simple.

From today (19 January 2023) till 5 February 2023, Google Pay users can complete these tasks to collect Lunar New Year goodies. This year, it seems that the Ingot is the rarest goodie to get.

Although gift baskets are a thing of the past, you still can earn a goodie with the help of a group of 3 or more friends by splitting expenses!

Want to get a gift or send one to get a goodie? You can also search for Telegram groups for Huat Pals!

Here’s the one we joined: https://t.me/huatpals

Need some extra goodies to complete your collection? Watch out for the Huat Scanner that will appear randomly throughout the day!

Using image recognition technology, you can use your Google Pay app to scan items that you will come across during house visits – think red packets, oranges, pineapples, coffee cups, and paper lanterns!

Each successful scan will earn you a goodie, or partner vouchers from local merchants such as Flash Coffee and Guardian.

Pro Tip: You can scan digital images too if you don’t have the item at home!

Like Huat Scanner, Huat Riddles will also appear randomly throughout the day.

Answering them correctly lets you earn additional rewards from participating merchants such as Fairprice, Klook, and Sephora!

Want the answers? Here they are!

This year, collecting Huat Pals no longer offers any monetary incentive. Instead, each transaction you make will help you unlock a Huat Pal which you can then view in your Huat Pals album, kind of like collecting Pokemon to fill up your Pokedex.

You can also send in-app messages to share (boast about) the 28 different Huat Pals that you have collected (like the elusive BB Loh and Lenny from previous editions).

It’s sad to see that gift baskets have gone away this year and it seems like the only reliable way to get LNY goodies is to pay with Google Pay. While you can gift goodies to friends, you’ll also have to earn them first.

Nonetheless, Huat Pals is a great way to earn some prizes this Chinese New Year and I hope you get lucky too!